Three out of the last four years I’ve had exhibitions to paint for. I didn’t plan it that way, it’s just how it worked out. But what that means is creating a body of work with a deadline. It’s not the time to experiment, dork around and try new media and materials. You go with what you know. I don’t have an exhibition coming up for at least another year or so, but will have juried competitions and exhibitions to do new work for starting in January. So I finally have breathing space to explore, experiment and maybe integrate some new tools and techniques into my process or just do for fun. One part of that has been “gray studies” and you can see some of them here.

For the last few days I’ve been trying out Derwent Graphitone pencils on a variety of papers. When you’ve been at this as long as I have, art materials accumulate, including paper. Digging around in my flat file paper drawers and looking over my sketchbook options, I found 15 different ones to try, including also a a hot press watercolor block. The Graphitone pencils are water-soluble graphite. I use a waterbrush to wet them, so the paper has to be able to take that without buckling.

What I was after was a forgiving surface that could be layered, would let me control the damp to wet graphite and end up with something that was visually pleasing. Most did ok, but some have made the short list, including the piece at the top, done on Strathmore 300 vellum bristol. It’s 100lb. which worked fine, but a thicker ply would be even better.

None of these are more than, at most, couple of inches in height and took no more than about twenty minutes. I need to get better at doing humans, so I used some of my Mongolia people reference and got a two-fer out of it.

The woman above was done on, as you can see, Letraset hot press illustration board. I liked the result, but I’m not sure about carrying a small pile of boards around if I want to use this technique on location, expecially Mongolia. 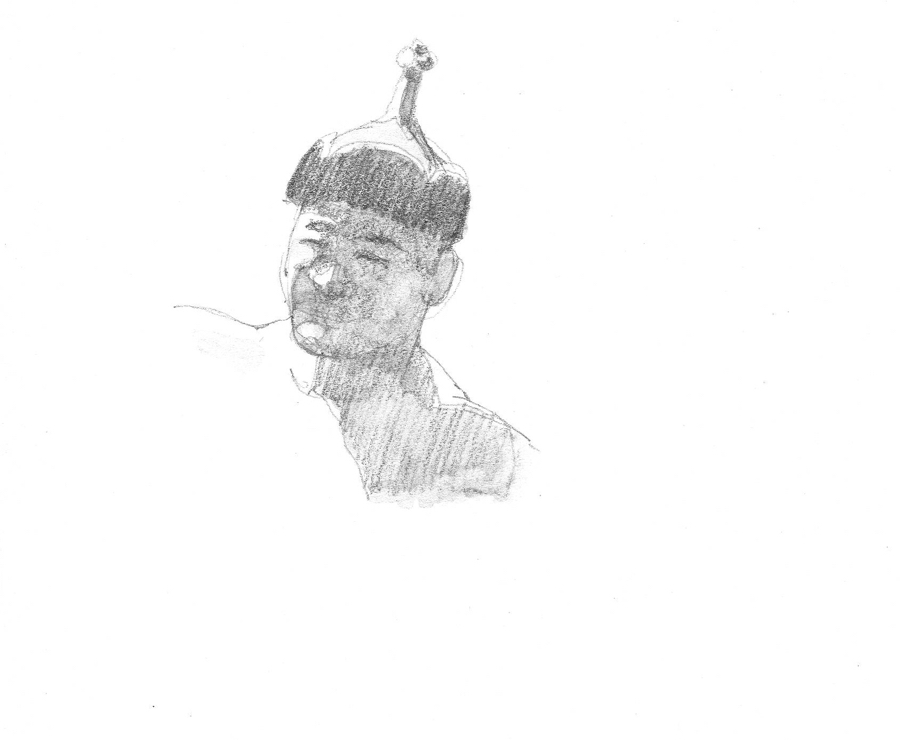 For the wrestler I used a Strathmore bristol vellum 476-2 that I found at the bottom of the flat file drawer. I only knew what it was because I’d jotted the name in the corner.  It wasn’t bad, but I have no idea if it’s still available.

I’ve been very taken with the Pentalic Nature Sketchbooks. They seem to handle a variety of dry and “damp” media well. However, the paper is thinner in the newer sketchbooks from when I originally started to buy them (even though they still say 130lb. on the cover), but the Graphitone did act more like watercolor when wetted than on some of the other papers.

Finally, for this portrait head I used an off-white Strathmore 400 vellum bristol, which had also lived near the bottom of the paper drawer for many years. I like the way the media worked on this paper the best. It’s probably 3-ply which means it can take a fair amount of water. But paper formulas change over the years, not usually for the better, so I’ll be buying some to see how well it works today. Fingers crossed.

The other papers I test drove included: Rives BFK (my favorite for dry graphite drawings), Sennelier Album Carte d’Art, Rising (plate finish), a Canson drawing paper, Aquabee Super Deluxe (a great example of a paper that has been ruined by cheapening and thinning over the years as the company has changed hands), Crescent cold press illustration board and, finally, Daler Cartridge Paper. The watercolor paper was Lanaquarelle hot press.

Looks like we’re going to have rainy weather for the next week or so up here Behind the Redwood Curtain,  perfect for continuing my explorations. Family coming up next week for Thanksgiving, so see you in a couple of weeks. Have a great holiday!