It’s one thing to see and appreciate how other artists use techniques like “lost and found” when viewing their finished work. But I thought it might be useful to show a couple of step-by-step demonstrations of how I go about it. First, one in charcoal and then a second in oil paint.

Here’s a selection of my drawing stuff. I used a 6B Extra Soft General’s charcoal pencil for the following study, which I think just might make an interesting painting. The “stumps” on the left are used for blending. I’ll be sharing a book on sketching next week that really showed me what the stumps are good for.

Also, here is my computer set-up. My husband, bless his heart, built the platform it all sits on to my specifications. We fastened it to the IKEA desk with an office chair swivel to ensure that it could easily support the off-center weight of the iMac, which has a 24′ glossy monitor. 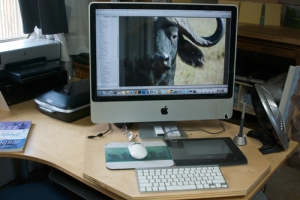 Using the image on the monitor, I did this value study-

The drawing is done and now I’m starting to lay in the shadow shape on the left as one mass. 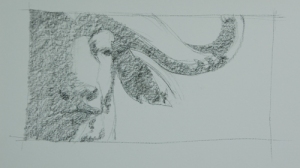 All the shadow shapes are done. Notice that I haven’t put in any detail or features in the shadow, except an indication of the nostril and some of the mouth.

The finished study. The shadow area is treated as one big shape and I’ve “lost” all the rest.

Here is a second demo done in paint. The same principles apply. 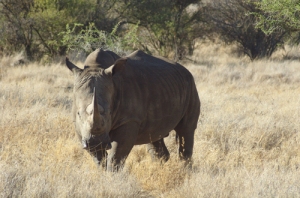 The starting image; a white rhino I photographed at the Lewa Downs Coservancy, Kenya, in 2004. The light side and shadow side are very distinct.

The initial drawing. Why red? I could make up a really cool explanation, but actually I picked it up from Scott Christensen. Sometimes I use other colors depending on what I have in mind for the painting, but I tend to fall back on the red for these quick studies. One less decision to make.

Once again, I’m laying in the shadow as one big shape. 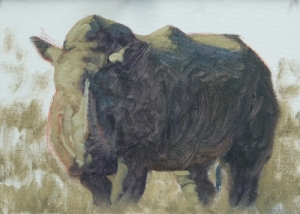 I’ve added color to the light side and also used the same tone for the background. Notice that I have left brush strokes showing for visual texture and that there are four different color temperatures in the shadow.

I’ve now covered the background with paint and picked out the lightest areas on the rhino. 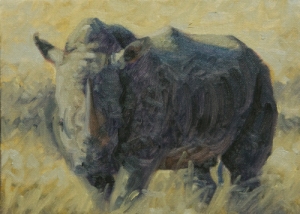 The finished study, which took less than two hours. I lightened the background to pop out the shadows, added a darker tone on the left to pop out the side of the head and added some final brushstrokes at the bottom to suggest grass.

A little tired after all this? You’re not the only one: 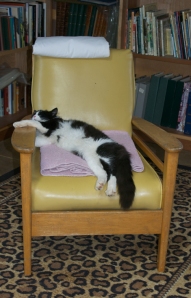