It was time for the Expedition to try to see critically endangered saiga antelope (Saiga tartarica mongolica). I had been told that they could be found in an area in Khar Us Nuur National Park between Khar Us Nuur and Dorgon Nuur and also to the south. That’s the way we headed in the morning at about 9am trailed by a cloud of mosquitos that we thankfully and quickly left behind. The sightings began at 9:40 am (I kept notes of time, number of saiga, plus a GPS reading of the first sighting).

Three saiga antelope; they really blend into the landscape 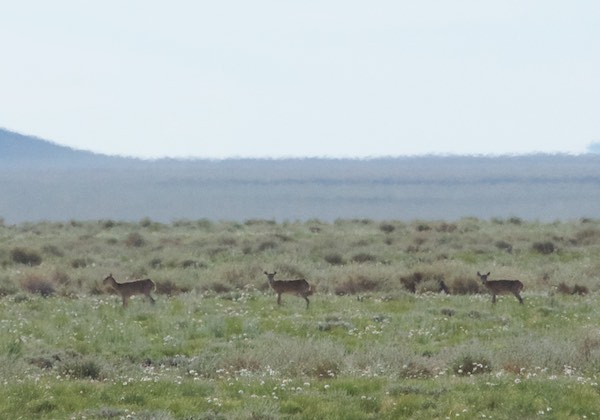 Almost all the sightings that followed were initially made by the driver who, typically, had incredible the visual acuity I’ve kind of been spoiled by over the years. I’m always scanning with my eyes and binoculars for whatever we’re looking for but rarely spot an animal before the driver. (The exception is argali at Ikh Nart because I’ve spent so much time there and know exactly what to look for.) And were there ever sightings! Between 10:45am and 12:49pm, we saw a total of 35 saiga in groups of 2-5, except for a single calf, every five to ten minutes and I got some kind of “I saw them” shot of almost all of them. Part way through my guide remarked that she’d brought a group of tourists to the same area not long before and they’d seen exactly….five.

We came to this place where there was a spring that saiga came to drink at. The driver said that we wouldn’t likely see any farther south, so we turned back and the sightings, as described above, continued as we retraced our route.

On one stretch the car flushed lots of Pallas’ sand grouse. It was a challenge to photograph them from the moving car, but I got some good shots.

We came within sight of Dorgon Nuur again and…more saiga! The dunes are the same ones we had to work our way past the day before.

Saiga antelope with Dorgon Nuur in the background

It had gotten hot and mirages appeared in the distance. 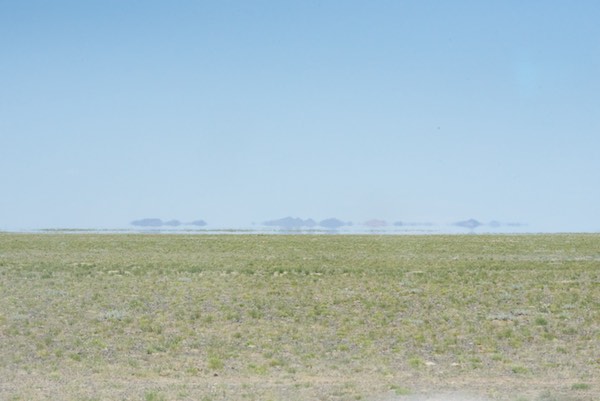 Finally, around 1pm, we stopped for lunch at an observation tower that was in the middle of the plain between the lakes. We parked near the base of it. The only shade was on one side of the car. The driver, who was also the cook, had made, believe it or not, sushi for lunch. No fish, just rice, a little vegetable and an interesting sauce, but it really hit the spot. 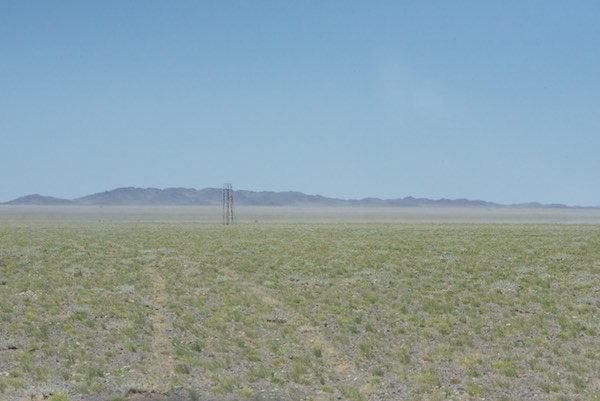 I did some sketching while we rested and watched a herd of camels wandering past.

I had been looking at my map and noticed that there were some small lakes at the north end of the park. I asked the driver if it was possible, with the time we had for the day, to go there. And that’s the direction we headed after lunch.
In a lot, if not most, of Mongolia there aren’t any trees, so the raptors just stand on the ground, like this upland buzzard, when they aren’t flying.

As we drove red rock formations came into view. Past them in the distance are some of the reedbeds of Khar Us Nuur.

We came to a raised area to the left of the rock formations and, wow, what a view! 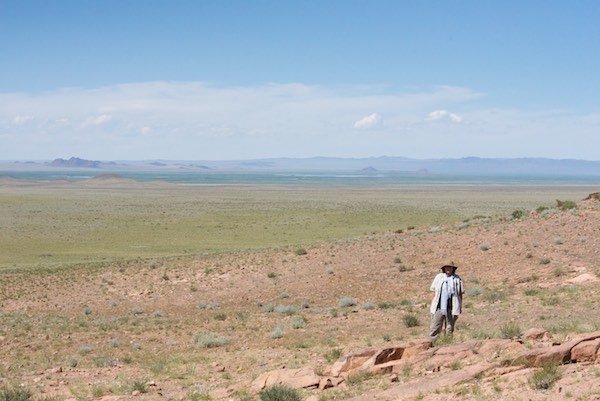 Posing with the view

I could see that we were still a long way from those small lakes, if they were even there, but my guide more than made up for that by telling me that from where we were standing there were three sacred mountains to be seen. That was completely unexpected. She pointed them out to me from left to right. The first, to the west was…Hokh Serkhiin Nuruu, which was where I had been for the argali capture just  a couple of weeks ago!

To the right and north was Altan Hokhii, one of the four State Sacred Mountains of Mongolia. The president of Mongolia had visited it for a ceremony not long before. It still had quite a bit of snow on the top even though it was August. The green in the middle ground are reedbeds.

And finally, almost straight north was Tsambagarav (4165m) the tallest of the three. It and the surrounding area form one of Mongolia’s national parks. It also still had snow on its peak. 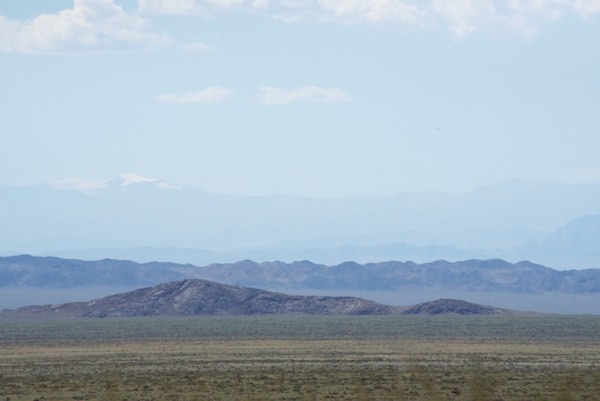 This is one of the things I love about traveling in Mongolia. One can have a plan or idea of what one wants to see or do, but something else equally good or better often happens instead. Having reached the northmost point of this drive for this trip, we turned south. We now had Jargalant Hairkhan Uul on our right and another line of hills to our left, forming a very wide, shallow valley that started out arid and absent any gers or livestock, but gradually became greener and populated.

We started to pass gers quite regularly, some right next to the road.

There were more and more goats and sheep and we found ourselves momentarily in a “sheep jam”. 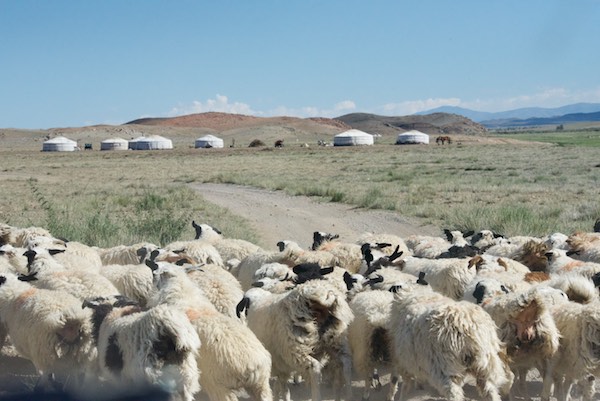 The landscape became quite green, trees appeared and then I saw a good-sized wandering stream.

It was quite beautiful and very appealing with a storybook quality. All I could think was what a great place this would be to spend the summer. And apparently that’s what a lot of the local people do. They live in or near, Chandmani, the soum center, most of the year, but in the summer set up gers in this valley and stay in them on the weekends and for vacation. At the end of the season they pack them up and store them away. 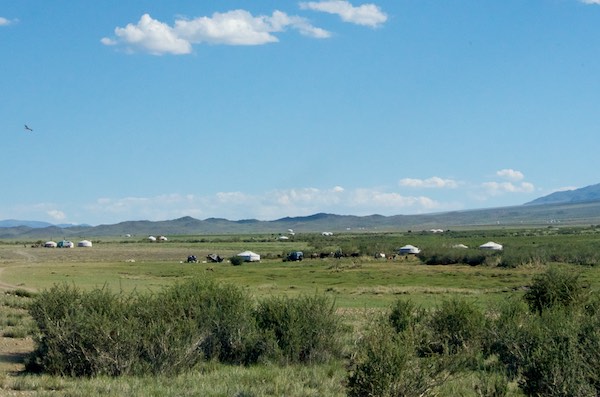 We came to the end of the valley, which had a lot of trees, and were at a high enough elevation that we could see Dorgon Nuur in the distance.

It was getting late in the afternoon and I knew we’d be stopping soon to camp for the night. I gazed longingly at the trees, which lined the streams. But I leave the choice of campsite to the driver unless specifically asked. So on we went, past the trees, up a slope, around and over a rise, the road becoming more of a rutted track. There were signs of previous campers and, unfortunately, quite a bit of trash strewn about. Yuk. But then we dropped down the hill and pulled up at this: 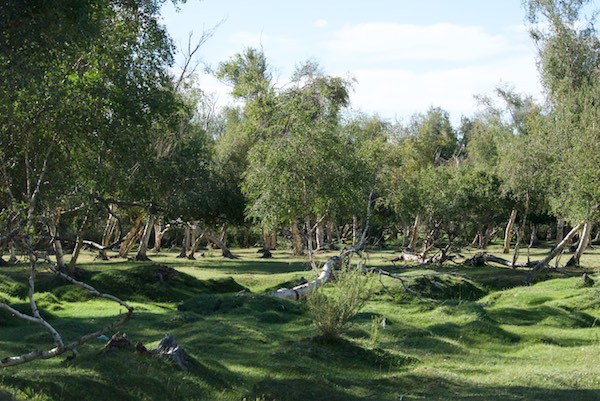 Oh, my.  The driver asked, through the guide, if this would be ok. All I could do was grin and nod “yes”. To get to it we had to carry our gear across this. 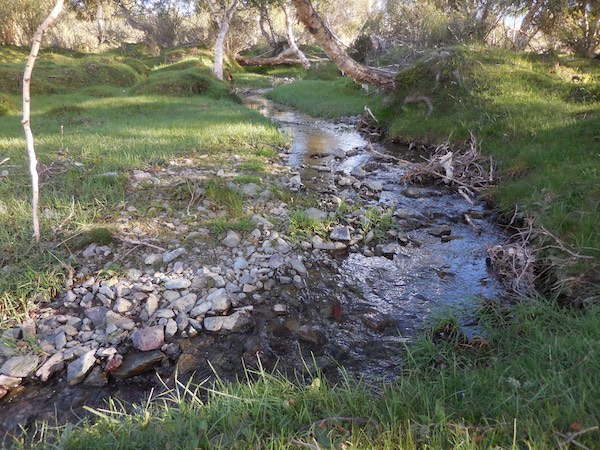 I know. Bummer. But I soldiered on and picked this spot for my tent. Then I took my shoes and socks off and went wading in the stream and just sat on the bank with my feet in it, listening to the water and the black kites wheeling around overhead (more on them next time).

One of the Best Camping Spots Ever

And then it was magic light time.

Magic light among the birches

I wandered about the area, did a little sketching and wished we could stay here for a week instead of just one night. More on this special place and some of the art I created here next week.