How I Start A Painting

There are many artists who come up with a way of working that satisfies them and they never alter it. That would not be me. Every year about this time, I sit back and rethink my whole process of painting a picture. I’m perfectly willing to toss it all in the air and tweak and change whatever I think needs it. It’s very liberating.

I recently went to the Norman Rockwell show and was reminded of how thorough a process he used, how he broke down the elements of a picture and solved the problems as much as he could with each step, always leaving the door open for alterations down the road if needed. It’s the same procedure we were taught when I was getting a degree in illustration at the Academy of Art in the late 1980s. One didn’t need to do every step every time, but it was always there to fall back on if one got in trouble. (The steps are: thumbnails, rough drawing for composition, finished drawing, value study, color study, finish)

One of the things Rockwell did was very finished charcoal drawings at the final size. It always looked like a lot of work, even though I really love to draw, and I guess I never really got the point. I do now. I got into messes a couple of times in the past year, partly due to not solving all the drawing and value problems before I started to paint. I had begun doing drawings at the final size for the large pieces, but only outlines, no value. I’ve just started a series of three argali paintings and decided to take it up a notch.

I also needed to rethink how I got my image onto the canvas. I don’t have a projector anymore and don’t really want one. I’ve found a lot of value in drawing an animal multiple times because I really LEARN it. A painting shouldn’t be about saving time or doing it fast. It should be about doing what it takes to get it RIGHT.

One benefit of doing the drawings at the finished size is that it is then easy to make a tracing and do a graphite transfer. The alternative is the venerable grid system, which works just fine, but, dare I say it, takes a lot more time to no good purpose and, more importantly, didn’t give me as accurate a result.

These three pieces are compositionally simple. I have a clear idea in my head of where I want to end up. The main upfront decisions were how big and what proportions each one should be since they are intended to hang as a group, although they will be priced individually.

The reference photos (which I am not going to post due the vagaries of the internet) were taken during one action-packed hour with five argali rams at Ikh Nartiin Chuluu Nature Reserve in Mongolia in July 2010. And two afternoons I spent there this past August during an eleven day stay doing studies of argali horns at the research camp really paid off in being able to understand the horns in the photos.

I’ll start with that page from my sketch journal and then show you the steps so far for the three paintings. I didn’t do thumbnails or rough drawings, but went straight to finished working drawings of the animals, but still thinking about what the landscape will look like. 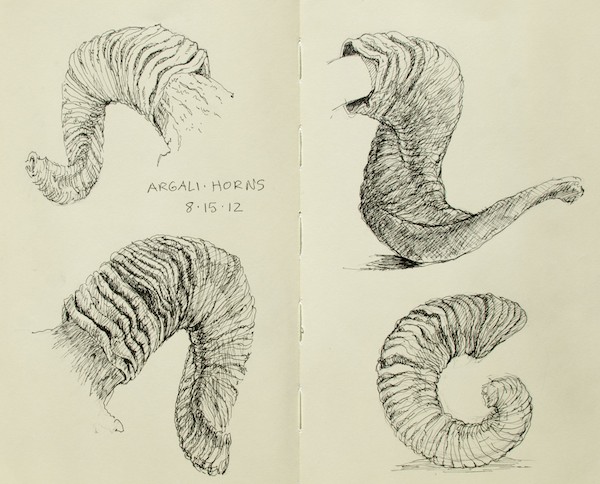 Painting No. 1- Tentatively titled “Coming Through”, a big ram asserting his right to walk wherever he wants to, when he wants to 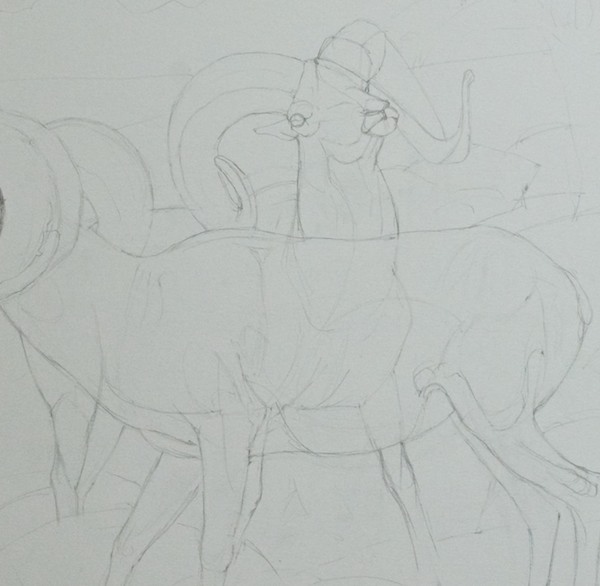 Beginning the graphite drawing; detail to show how I “drew through” the ram in back to make sure the parts all are in the right places. I used another piece of reference for the back legs since the ones in the photo didn’t read well. 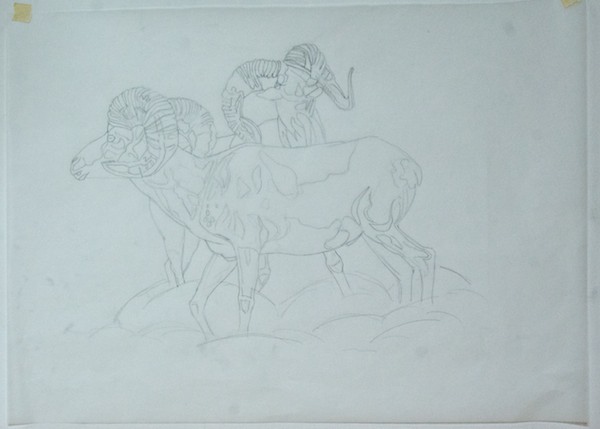 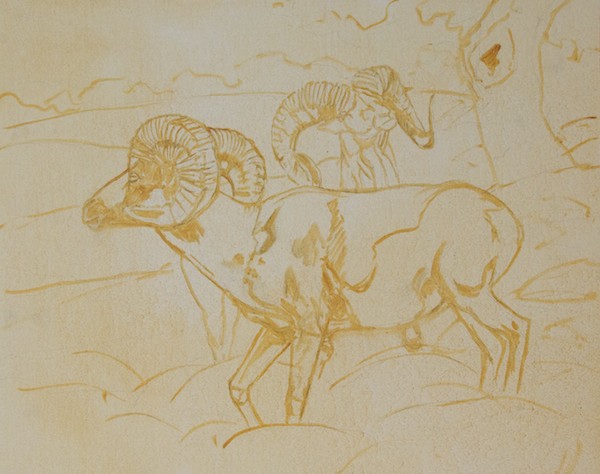 Painting No. 2- No title yet

Painting No. 3- No title yet 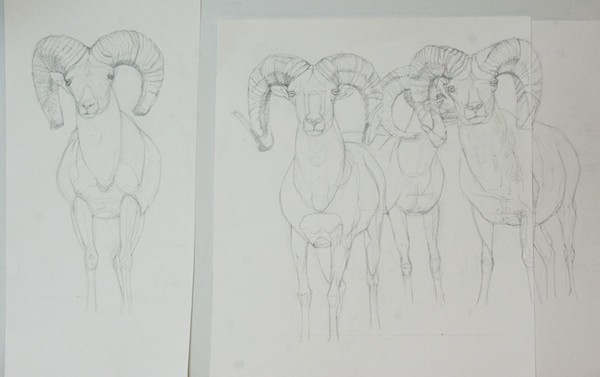 Graphite drawing; this was the third one and felt that I didn’t need to go all the way to the same point. It was more important to get all the size and position relationships between the rams correct. The one in the back looked very odd in the reference photo, so I changed out his head for a profile instead of three quarters view. Notice that the single ram and the group are on separate pieces of paper so I can move them around.

I should have a pretty good handle on argali horns by the time I’m done with all three paintings.