Got back from my trip last Thursday evening with no more than what is the usual nonsense when one flies these days. Plane was late getting to Denver, so we were late leaving Denver, which meant I missed my 4:12 connection in San Francisco. On the bright side, the airline automatically rebooked me on the next flight home at 6:30, which was good since the last flight out didn’t leave until, ouch, 11:30pm.

We have a canine guest right now, a 3.5 year old male German Shepherd rescued from a seriously rotten situation. I’m doing the emergency foster while a ride is lined up to get him to his long-term foster. He’s spent the last four months with people who didn’t “like” him, so he was kept inside and forced to do his business in a room. He’s got what looks like flea allergy dermatitis. Very thin fur on his back end and tail. Also very scared at first, but totally unaggressive.

We have him on a long cable tie-down on the patio so he can have peace and quiet, but start to get used to a normal environment not filled with screaming and craziness. He’s unneutered, but very submissive. Ignores the cats. Associates collars and having his neck reached for with something negative, but isn’t head shy. Niki is modeling calm, balanced behavior and setting boundaries for their interactions, so he’s my partner in helping get the poor guy back on an even keel. He’ll be a fantastic family companion once he’s had time in a stable environment and gets his confidence back.

I guess the moral is, if you really don’t want an animal, don’t just ignore it and stop caring for it, do what it takes to get them to a place where they have a chance to get a new home where they will get the love they deserve. Sheeh, is that so hard?

I had a great time sketching and photographing at the Denver Zoo, along with getting to see the Robert Bateman show at The Wildlife Experience. There were so many of his iconic images- the snow leopard sitting on a cliff as snow swirls around, the orca amongst the kelp, the storks at dusk with the shimmering band of gold water, plus some of his early abstracts. He is the living master in wildlife art when it comes to design/composition and the sheer beauty of his painting. Very, very inspirational. If you are in the Denver area and you want to see the best in animal art, see his show.

There was also a small room with paintings of African subjects and I was tickled to quickly realize that I had at least met, if not studied, with all of the artists: John Seerey-Lester, John Banovich, Simon Combes and Daniel Smith. I think I feel a lion painting coming on!

In the meantime, here are some of my sketches from the Denver Zoo. Most of them took less than three minutes, if that, so no time to doodle around. First I try to capture the gesture of their pose or movement, then add things like eyes and fur texture. Last is value, Sometimes I end up adding the modeling and “color” while I’m having lunch. The lions were very fit for zoo cats, but I’ll still “tighten” them up by referring to lions I photographed in Kenya.

The horses are my beloved takhi, of which three were out when I was there. I had seen domestic yaks, but these were the first wild yaks. They manage ok in The Mile High City, but in their native (shrinking) habitat, they thrive at 15,000 feet plus. 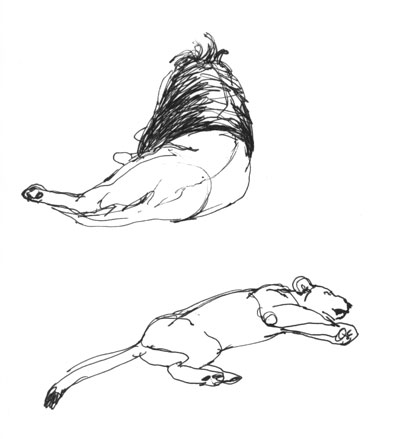 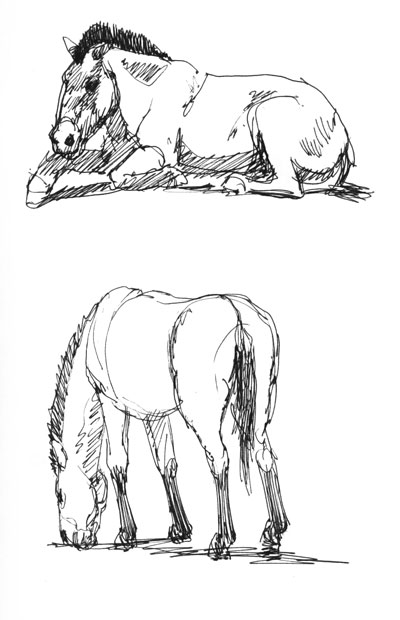 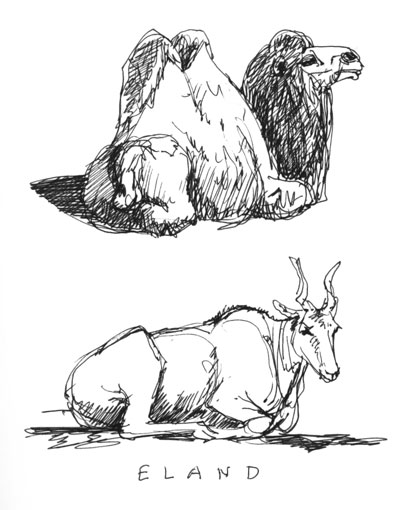 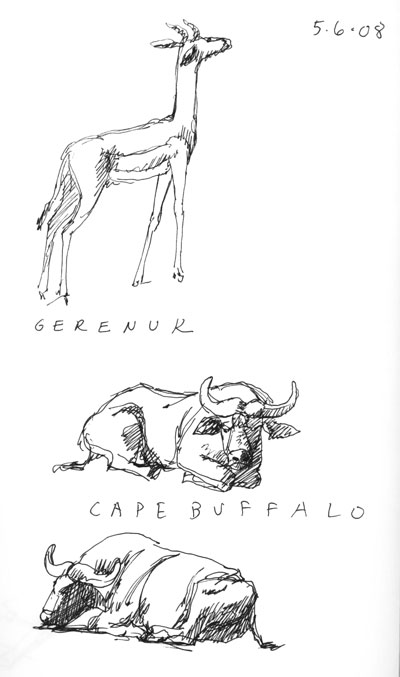 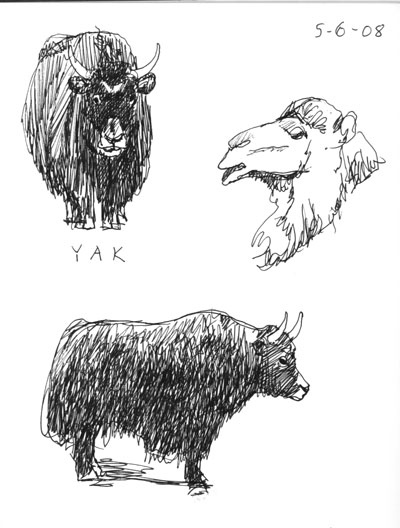