Life Goes On, Part 18…Works In Progress And Roses!

I was busy in the studio last week doing the second and third steps in preparing three new paintings to hit the canvas. I’ve been wanting to start using the Mongol horse race reference I’ve gathered over my twelve trips there since 2005 and the time has come.Above […]

As I noted in my previous post, in Mongolia flexibility is important. So when I got back from my weekend at Arburd Sands ger camp and found that the other artist had cancelled due to a family emergency, I had to get flexible and fast. The WildArt Mongolia […]

This is the biggest holiday in Mongolia. Ulaanbaatar pretty much shuts down for a few days while everyone celebrates and attends competitions in the Three Manly Sports: horse racing, wrestling and archery. I got to see all of it, including a local celebration, in 2009. Here’s some photos, […]

When traveling in Mongolia, one often sees the herders out taking care of their animals. Often they’re wearing western clothes, but a lot of them wear del, the traditional long garment. It’s very practical and makes them look very dashing. What isn’t quite so dashing are the ubiquitous […] 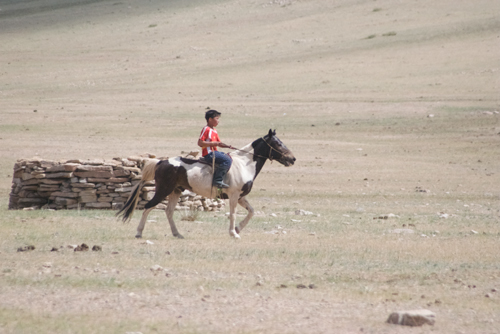 There’s this saying about combat flying- hours of boredom interspersed with moments of stark terror. At a far less dramatic level, painting seems to have a similar rhythm sometimes. We spend days or weeks working on paintings and, suddenly, some get finished, signatures go on, photos are taken […]