I saw these lovely foals in the same group of horses that this painting came from. They were very unsure of a strange person and stayed close to the adults, but were still curious about me.

I started this painting with my new step of doing a pencil drawing at the final size first, tracing it and then doing a graphite transfer to the RayMar canvas board. My purpose was to solve any drawing problems, get the correct placement in the space and indicate the basic value pattern.

Once the drawing was transferred to the board, which had been previously toned with a wash of raw sienna to knock back the white, I re-stated the drawing with a brush, refining and correcting as I worked. This step was also done with raw sienna.

The next step was to indicate the shapes of the shadows in a dark value. I mixed a warm brownish-purple for this.

Then I started to lay in color, bringing up the shadows to a higher key since the foals were in really nice morning light. 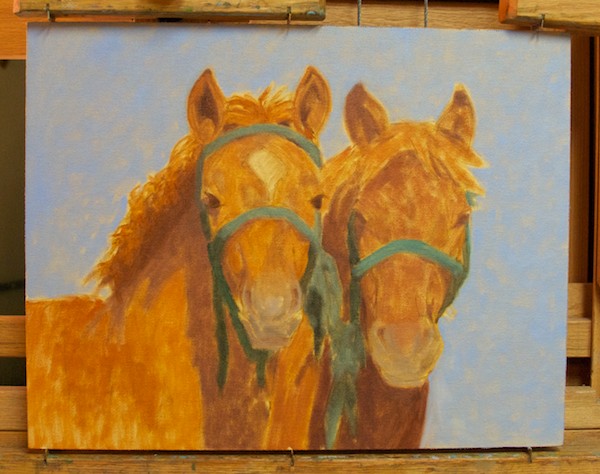 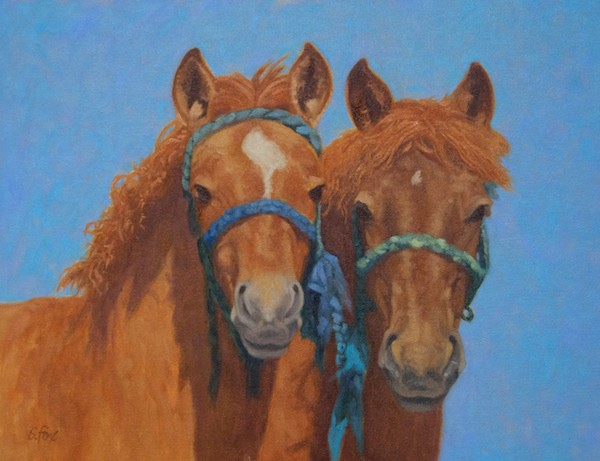 Here’s the reference photo. I punched up the intensity of the color, as you can see, and left out all the other horses since the painting was about these two and their connection with each other.

This was the first painting I started after the long travel layoff. I wanted to keep it simple, so I chose this beautiful paint horse standing with his back to the morning sun. In my reference he was standing with a hill behind him, which wasn’t very interesting, so I “moved” him to a  background that let me do a landscape, too. The setting is the Hangai Mountains of central Mongolia, a lush and scenic part of the country that isn’t anything like the vision most people have of the Land of Blue Skies.

When traveling in Mongolia, one often sees the herders out taking care of their animals. Often they’re wearing western clothes, but a lot of them wear del, the traditional long garment. It’s very practical and makes them look very dashing. What isn’t quite so dashing are the ubiquitous baseball caps, however inexpensive and practical they are. So when I was at a mountain blessing ceremony at Bag Gazriin Chuluu and was walking around after the horse race, this gentleman really stood out with his red and yellow hat. I have no idea who he was, but he was scraping sweat off one of the horses with a special blunt, flat blade. I believe the sweat from a winning horse is considered to have the strength of that horse in it and so is very auspicious. The blue scarf is a khadak, which is used for offerings.

Here’s the step-by-step for “After the Race; Scraping Sweat:

I’m currently working on a large painting that is the most complex one I’ve done yet. I’ll post it when it’s finished. But, in the meantime, I’ve kind of taken a break from it on and off to do something simpler and more straightforward, a head study of a takhi stallion I saw at Hustai National Park in 2006. I had a reference shot that I liked because of the shadow pattern, but as you’ll see there were adjustments that had to be made for it to work as a painting. I hope this step-by-step illustrates how important it is to not, as they told us in art school, get “married to your reference”.

I thought I’d get a two-fer this week and combine my eBay listing with Mongolia Monday since the painting up for auction is a 8×6″ oil of a takhi (Przewalski’s horse). It’s from a photo that I took at Khomiin Tal, the westernmost of the three takhi reintroduction sites in Mongolia. I visited there in September of 2006. What an adventure that was for me! I flew out to Hovd, met my guide and then went by Russian Fergon van (those of you who have been to Mongolia know what that means…) east over 100 miles on what the Mongols call “earth roads” to the river valley where the horses were. I got to see them in late afternoon and morning light and got a lot of good reference. Here’s a photo of some of the horses grazing-

And here the painting that is currently available at auction here

This young stallion was part of a bachelor group that I photographed at Ikh Nartiin Chuluu Nature Reserve last September. The soft edges of some of his markings made me think of watercolor washes. I hope that I’ll see him again in July.

I was able to take many good pictures of Mongol horses on my trip there in September. This was a stallion who showed up with his harem very near the ger camp at Ikh Nartiin Chuluu late one afternoon. Due to lack of rain, all the herder families had left the area, along with their livestock, but a few groups of horses had been left behind to shift for themselves until their owners returned.

I wanted to really work on understanding horse structure so this is a bigger painting than what I’ve recently been doing – 24″x 36″. The horse is almost 19″ at the withers. I really loved the rhythm of the movement. It was almost like he was showing off. I don’t know horse behavior nearly as well yet as dog or cat, so I’d love to hear from anyone who can interpret what he’s doing and why.

Since the horse was what I cared about , I left the background as a field of mostly warm color with some cool color showing from underneath. 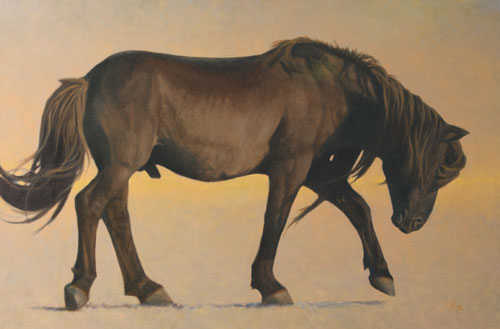 NEWS FROM THE FELINE FRONT

Meet our new family member, Alexander! We brought him home yesterday from the Humboldt County Shelter, where I volunteer. He’s four months old and extremely friendly. He likes other cats (although our three girls aren’t too thrilled at the moment). He’s done a nose touch greeting with Niki the collie. We’ve set him up in a crate in my husband’s office since Alex is supposed to be  mainly his cat. 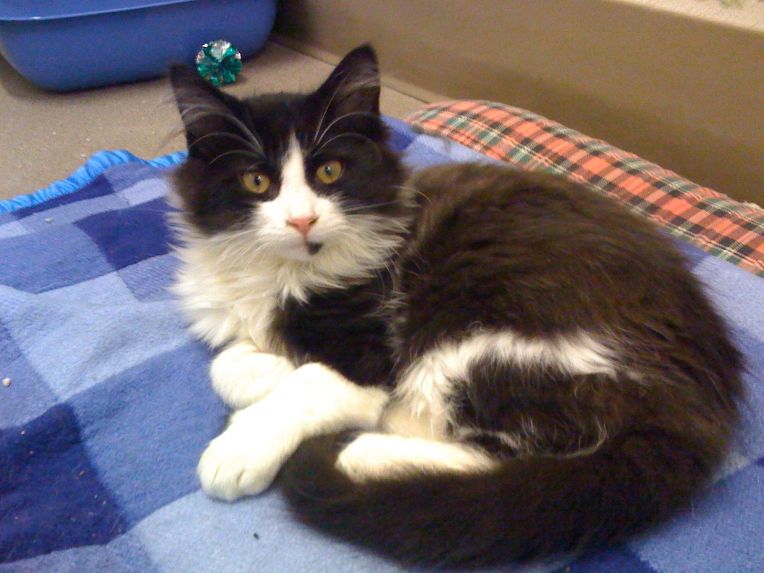 The vet was just here (she does housecalls only; how cool is that?) and she thinks that he may be part rag doll because of how easy he is to handle, kind of like, well, a rag doll. She pronounced him in good health and recommended a bath at the groomer’s to get rid of the whiff of shelter odor and get him all nice and fluffy. We all want to get him the best start on the rest of his life that we can.

FYI: never bring home a new animal, either a cat or a dog,  plop them down in the living room and turn them  loose. New introductions need to be taken slowly with consideration for everyone. The new animal should be in a crate or behind a baby gate or in a room like the bathroom to ease in gently and avoid conflict. He’ll stay in the office at least until Sunday.

I started some fun paintings from my new Mongolian reference last week and thought I’d share a couple of them in progress. I’m experimenting with a new way of starting, based on something I learned from John Seerey-Lester. Up till now I’ve begun by drawing directly with the brush, using line. It’s a default from being a “drawer” as a child. One of the major things I learned in art school was to see shape instead of, or in addition to, line.

Since I don’t use a projector, I draw directly from images on my monitor or a preliminary drawing. I sometimes get in trouble and spend a lot of time correcting. What to do?

Something must have been purcolating while I was away from the easel, because it suddenly occurred to me to do a light lay-in of the shapes with a big brush for size, proportion and location, wipe it out so that it is a ghost shape and then start the “real” drawing. It’s already made a difference.

So, here’s two in progress:

Also, here’s one of the paintings that was accepted and will be available for purchase at the Society of Animal Artists show “Small Works, Big Impressions” at The Wildlife Experience near Denver, Colorado.

It’s called “Breakfast for Two” and is a takhi mare and foal that I saw at Hustai National Park.