Paul gets the workshop under way with a demo at Carmel River State Beach.

I headed down the road April 21 for a plein air workshop with an artist I’ve admired for some time, Paul Kratter. I’ve always been sorry that I missed having him as an instructor in animal drawing, by just a year, at the Academy of Art University (then College) in San Francisco, where I earned a BFA Illustration in 1989. But we crossed paths and connected on Facebook a few years ago and I’m a great admirer of the plein air work he’s known for these days. It has the crispness and concise draftsmanship that one sees in the work of many artists who have an illustration background. So when I saw that he was going to be offering a workshop, “From Sketch to Painting”, within driving distance of where I live in Humboldt County, I signed up immediately.

Looking to capitalize on the trip, I left a day early and went as far as San Francisco, staying the night at an inn right across from the San Francisco Zoo. Sketching live animals is something I’ve been doing since 1989, starting at the same zoo while I was at the Academy. I was there when they opened in the morning and left to head down to Carmel in the early afternoon. Here’s the results. I only had, at most, a minute or two to capture most of them. The hippo and penguins were nice enough to stay still a bit longer. The koala never even twitched. I used a Sakura Micron .01 pen in a 7×5″ Pentalic Nature Sketch sketchbook. 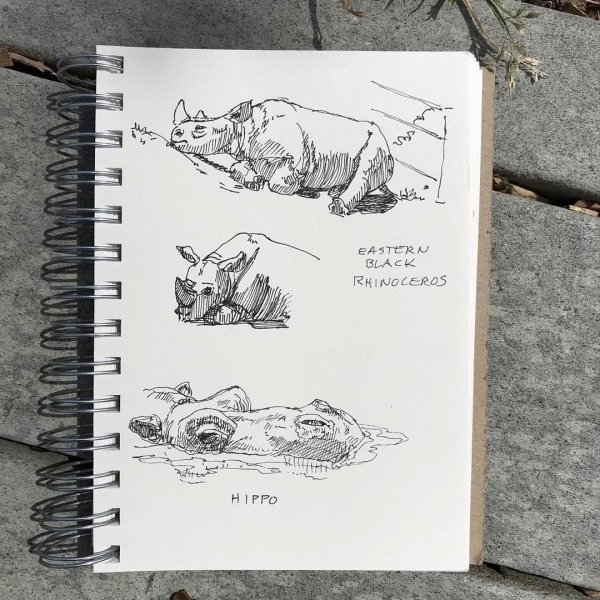 I arrived in Carmel, checked into my Airbnb room, got a bite of dinner, then went to Carmel Visual Arts to watch Paul do a demo by way of introducing what he was going to teach us over the next three days.

The next morning we all met at our first location, Carmel River State Beach, where Paul did another demo. I’ve personally never been much of a fan of them since in my experience they’ve mostly been about how the instructor paints with very little that was relevant to me and my goals as a painter. But both Paul’s and Scott Christensen’s (a local artist friend and I attended his 10-day plein air intensive ten years ago) were full of useful information. 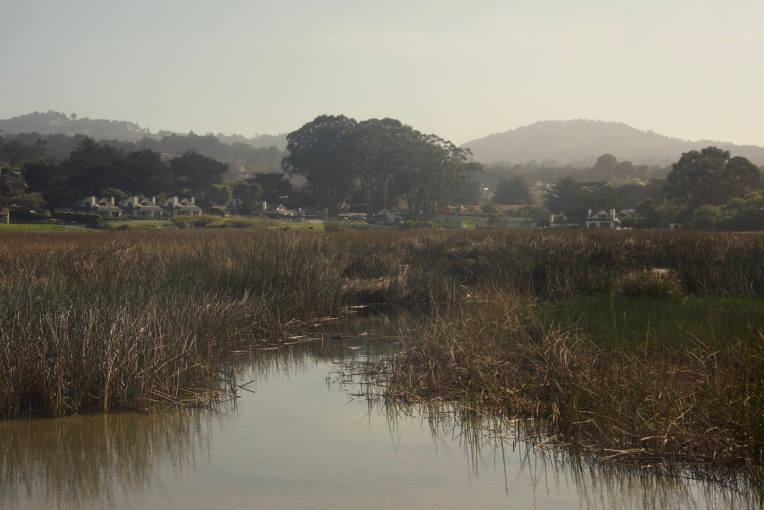 The motive or motif (plein air-speak for what the artist has chosen as her or his subject). Not the greatest light, but some decent atmospheric perspective, with the hills becoming lighter the farther back they were.

Paul uses an Open Box M that is mounted on a camera tripod. He starts with a brush drawing to indicate the main shapes (only 3-4 on a small piece) using a brush called a “bright”. It’s shorter and more square than a flat which is, well,  a flat rectangle. He moved his hand in sharp, short strokes. No niggling, searching or doodling.

The finished demo. I was really interested in how he moved away from the literal colors, rearranged elements to suit him then, to top it off, changed what had become a blue sky back to the more atmospheric yellowish tone that you can see in the photo. Lots of food for thought, filtered through how I have seen my motifs when I’m out painting..

Plein air painters “on the job”. I had my old Soltek easel which has a VERY persnickity mechanism at the feet that doesn’t go well with sand or dirt. I’d anticipated this and brought some cutdown plastic bags that new brushes are packed in by art suppliers and rubber bands to hold them onto the ends of the legs. I have a pochade box I bought years ago at the Sennelier art shop in Paris and I’m going to switch to it before I go out again. How I mount it on my tripod will be the subject of a future post.

The next day found us at Garrapata State Park, where we were stuck having to choose between scenes like this… 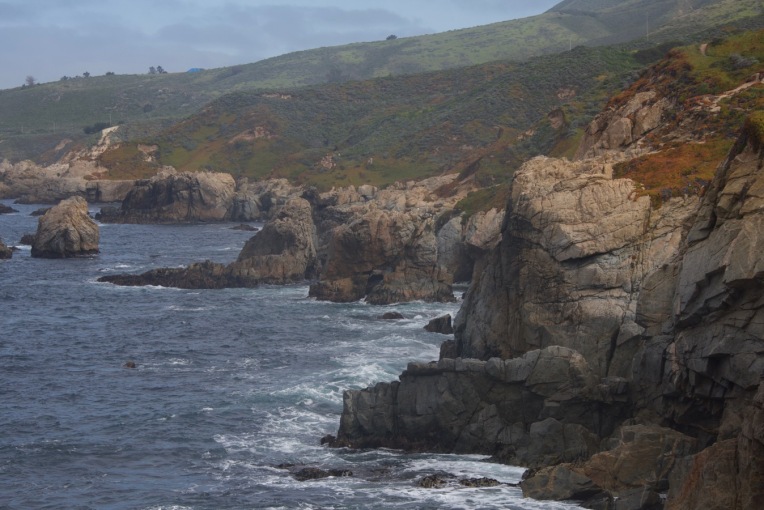 I only watched the first part of his demo since I really wanted to get a first pass done on the piece I’d started before we had to break off and meet for dinner. I get a lot out of watching other artist’s “starts”. 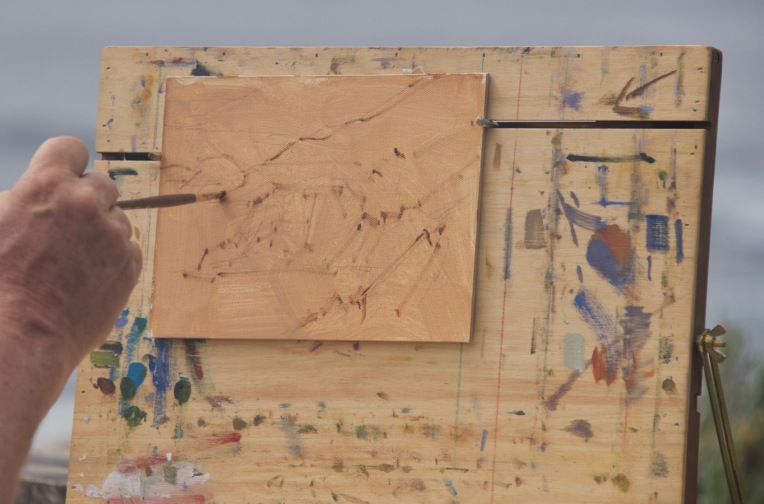 This is a good example of one of Paul’s starts. Basic shapes, no detail.

He then did a first pass with color, quickly filling in the shapes, paying attention to value relationships and color temperature. Farther away means lighter and cooler as the general rule.

He’s now adding the shapes of the shadows. Notice how loose they are. No hard edges.

In the meantime, I’d spent the morning working on understanding how to do the preliminary sketches with a pen. I absolutely understood the value of doing them, but it took awhile to start to get the knack of it and make good choices. I made a hash of the first one. Paul was nice enough to do the sketch on the right to demonstrate finding just a few large shapes, which makes for a much stronger composition. He also thought that what I was most interested in would work better as a horizontal than vertical composition.

I soldiered on and finally felt like I was starting to get the hang of seeing what I was looking at in a better way.

It got a little easier with each sketch. Then I tackled the waterfall. I ended up losing value contrast because of too many lines in the water. What a mess. After consultation with Paul and understanding where I’d gone wrong, when I got home I took an #11 Exacto knife and scrapped out the water. While not great, it was definitely an improvement. And I learned something valuable about keeping water the lightest value, the white paper color, as a starting default. It’s important not too get attached to sketches like this and to use them as a way to problem solve with pencil or pen, doing whatever it takes to fix or improve them. They’re simply a means to an end, but an important one.

Oh, yeah, I did have time for lunch, suffering for my art, but not much.

The third and final day we went out to a great regional open space to the east to try to get out of the coastal overcast. It was time for the iconic eucalyptus trees (introduced from Australia as they were) beloved by California plein air painters for over a century.

You can see Paul’s preliminary sketch and, faintly, the pencil layout on his panel. Here’s the sequence of the demo:

And I’m most pleased to say that this lovely painting is now in our personal collection.

I had also decided to paint the eucalyptus trees. I was definitely focused on the overall composition and value relationships in my sketch. Paul is a connoiseur of trees, looking for the same individuality that I seek when I’m drawing or painting an animal. He came by, saw my sketch and then took a few minutes to do a custom demo and talk about capturing light direction correctly. I love having examples like this to refer back to when I’m home, so thank you Paul!

The final piece I did in the workshop. Went to a smaller size and a larger, flat brush and got loose. I’m happy overall with the result and brought home something I can build on. I go to a workshop planning to “fail”, not make pretty pictures that simply repeat what I already know. Why pay money for that?

A big, big thank you to Rich Brimer, the Director at Carmel Visual Arts, for a very well designed and run workshop! I had a great time and learned a lot.