Not all good tales come from exotic locales. You don’t have to have a passport to get to somewhere worthwhile. And good adventures don’t all have to be exciting, much less life-threatening. Just getting out into nature wherever you live or travel to can yield fun, amusing and interesting stories. I’m known for my adventures in Mongolia, but I love to get out in nature and animal watch wherever I am. For instance, last March I spent over a week exploring southern Georgia and also some of the northern Florida barrier islands like Amelia Island and the town of Fernandina Beach, Florida, which turns out to have a wonderful and clearly much-loved community amenity, Egan’s Creek Greenway, a park braided with trails that run right through the town. Kudos to the townspeople who had the will and vision to set aside this natural area. You can read more about my March 2016 trip here and here.

We live in a rural coastal county in northern California, where the biggest reptile one is likely to encounter are large but harmless gopher snakes or a watch-your-fingers-cause-they-bite Pacific giant salamander. So it was a bit of stopper to see this sign upon entering what is essentially a town park…

It was late afternoon and the light was getting better minute by minute.

The trail split. I followed the one to the left, saving the one along the stream for the way back.

It was March but a few wildflowers were already blooming.

I really liked the three different textures of the grass, water plant, and trees.

I saw a movement around twenty yards ahead. I had my long lens so was able to get some good photos of what I believe are marsh rabbits (Silvilagus palustris). I noticed that they stayed in the shade, which makes sense for a prey animal. They are similar in appearance and size to the brush rabbits we have here in Humboldt County. 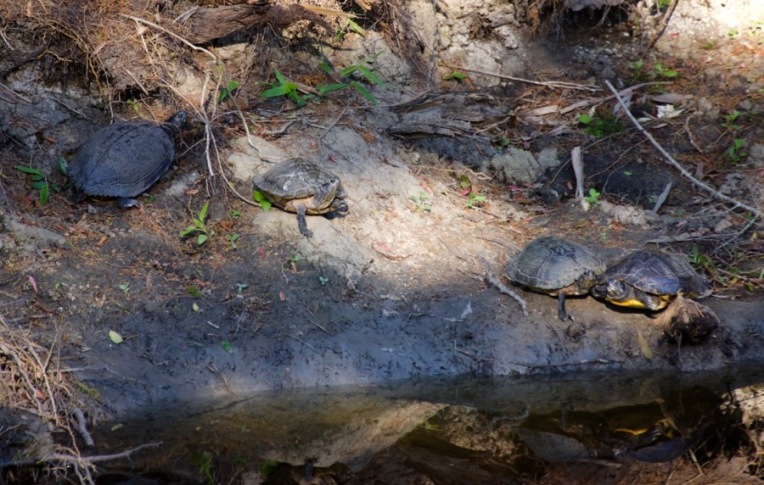 Turtles! This was a big deal for me since I’d never seen any in the wild before other than sea turtles in Hawaii. They are yellow belly sliders (Trachemys scripta scripta).

These were to the right of the ones in the first photo, all catching some last rays before sundown.

I had learned about this trail while chatting with my Airbnb host and this was my only chance to check it out. I couldn’t have come at a better time since the light was great and there was almost no one else around. 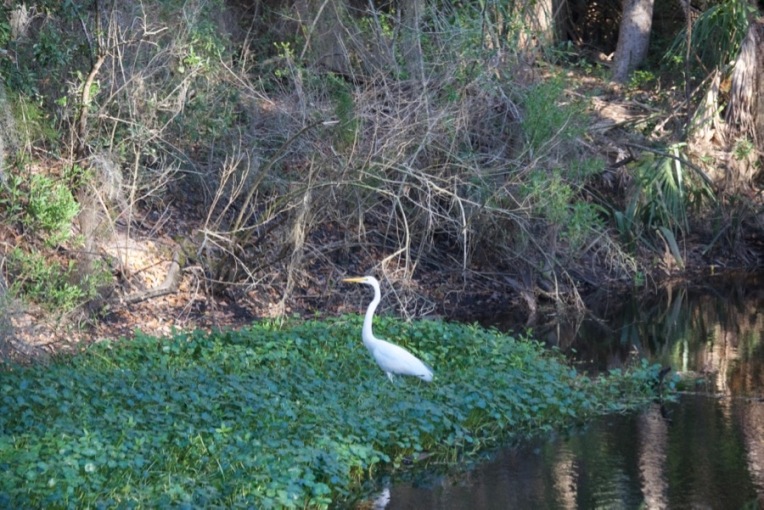 I came upon a great egret in soft cool light.

It took off and I got a good shot of it in flight. 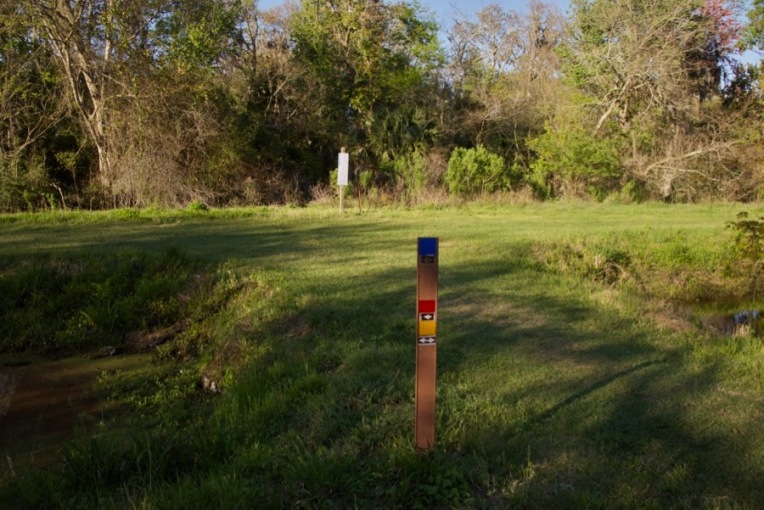 I came to another open area adjacent to a deep water-filled depression where the trails went off in different directions, I was getting pretty close to being back to where I’d started. I happened to look down into the pond…

And what do you know? An alligator! At least six feet long, also catching the last of the day’s sun.

Can you spot the gator? 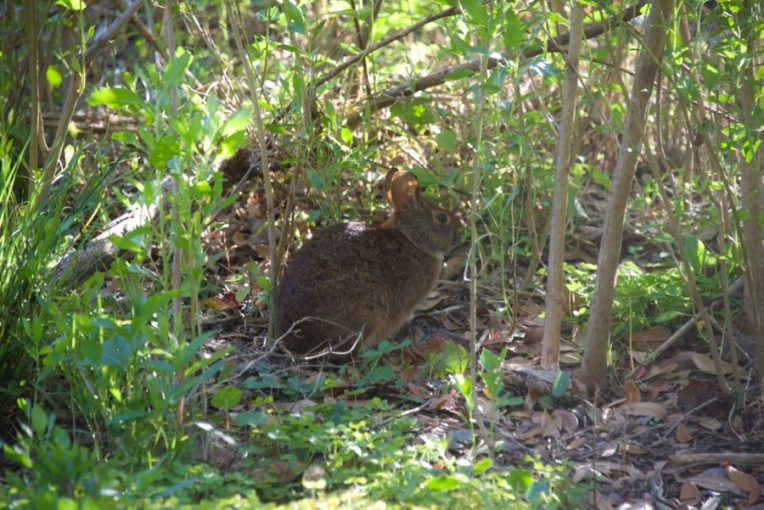 I walked on and a short time later came upon another grazing bunny who quickly hopped into the brush. I caught up to where I thought he’d gone and there he was, holding very still.

A few minutes later I spotted this male cardinal. We don’t have these where I live so I always get a kick out of seeing them even though I know they’re quite common.

A short distance more and I was out of the greenway into the open and here was a big pond with not only a great blue heron (we do have them here on the west coast, too), but  more turtles!

As I photographed the heron and turtles, I spotted something in the sky. It was a red-tailed hawk circling around. I took a lot of photos and finally got a few of the bird as it turned and caught the light.

What a day. But there was one more treat in store.

As I walked back to the parking area I spotted a small bird hopping around in the chain link fence and managed to get this one photo. It’s a palm warbler, a new species for me.

The whole walk was at most three hours. I had nothing in mind, just to explore a new area and see what was there. What places are there where you live that you’ve never gotten around to exploring? We tend to take where we live for granted, but nature is ever-changing and no walk or hike will ever be exactly the same. If you’ve discovered a local gem where you live tell me about it in the comments!

One thought on “Tales From The Field: A Stroll Through Egan’s Creek Greenway, Fernandina Beach, Florida”