What’s over that hill?

This post won’t show any great sights. Some of that is coming up. But it does give an idea of what travel between destinations is like, what’s out there along the road is interesting in its own way and almost always things that most visitors either don’t see or pass by. I love just rolling along on the earth roads through the enroute days, grabbing shots from the car as we go, doing a quick sketch or two when we stop for lunch. I never find it boring, no matter what the landscape is. Something nifty, cool or interesting shows up every day. It’s a kind of vacation for me….nothing really to do, the driver knows where we’re headed, knows to stop for wildlife and I can just relax into simply being in Mongolia, where the journey really will be the destination if you let it.

We had left Khomyn Tal and headed southwest towards a small lake the driver knew about and then would go on to Khar Us Nuur National Park. We were in an area I’d never been to before, so when we started up this gentle rise (above photo and also previous post), I had no idea what I’d see. And here’s the view, looking across a steppe area to the lake, a line of dunes and the mountains in the park beyond. It was a beautiful day and not too hot. “Bag” means “small” in Mongolian and “nuur” means “lake”, so Baga Nuur=Small Lake, which it was.

On our way there we passed a some people getting out of the sun in a jury-rigged shelter, something I hadn’t seen before.

The lake was big enough that I couldn’t get any shots of all of it, even when we parked on the top of a dune to get an overview. There were a lot of shorebirds in a few spots.

We continued north towards Khar Nuur (Black Lake), one of the two large lakes on the east side of the park. There were gers and livestock scattered around. This photo kind of sums up Mongolia today…horses on a picket line ready to ride and and a car. I have no patience at all with westerners who moan and go on about how the traditional way of life of the quaint and picturesque herders has been “spoiled” by modern things like, oh, mobile phones, solar panels, satellite dishes, etc., any and all of which they may have themselves.

We came upon this enclosure with the family engaged in shearing their sheep. The driver spoke with one of the men, who was shirtless and had the deepest tan I’ve ever seen, clearly someone who’d spent their life outdoors. I try to be discrete when photographing people, so stayed in the car and got just a few shots.

As we approached the lake we encountered this stretch of soft sand and dunes that had to be crossed. That’s the “road” in the photo. I had been told about this and remembered it from going to Khomyn Tal in 2006. Last year, when my tour company person and I were planning the Expedition route it had meant that the trip would have to use Russian fergon vans. It turned out that the Land Cruiser drivers out west can handle it, but sitting next to my driver I could see the specialized observation and skill set that was needed. It’s this kind of experience, repeated in different parts of the country with different drivers over the years, that has taught me what I know to be true about road travel in Mongolia.

Onward through the sand

We finally came to the spot where the southern end of the lake joins a south-flowing channel that connects with another lake, Dorgon Nuur.

Through my guide I had told the driver about my 2006 trip and mentioned camping on the shore at the site of a large log bridge that was partly collapsed. And there it was… 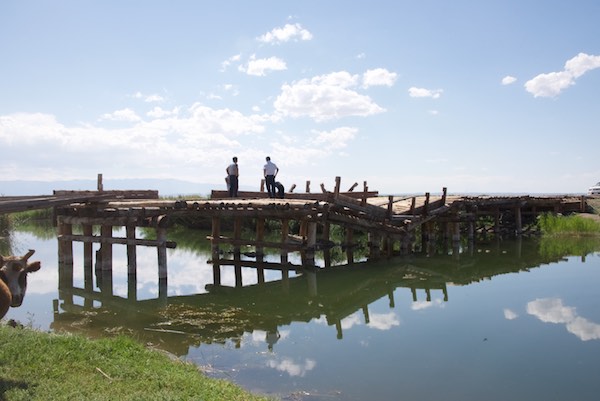 I did not walk out on it, but the driver and guide did. There was another car with some people on the other side. Being from the area, the driver knew them, so they had a visit while I took photos.  I have no idea why the bridge has never been repaired or replaced. Not having it means that people have to to quite a long way around to get to the area between the east and western lakes where Chandmani, the soum center is located. Here’s what the same bridge looked like at sunrise in 2006. I think you can see why I’ve wanted to go back again and have more time to explore than just two days. That’s Jargalant Hairkhan Uul in the background and there will be a LOT more about that mountain in future posts.

We drove back north to the Khar Nuur shore proper. The driver stopped and asked if we should camp here. Yes, yes, yes!

Here’s our campsite. My tent’s in the foreground on the left. It wasn’t too hot and there weren’t too many mosquitos. I could walk barefoot in the grass. We all bathed and waded in the lake, washed our hair and did laundry. It was a refreshing break from the heat and “mozzies” at Khomyn Tal.

There was a very nice sunset to watch and one could see that it was raining to the west. Summer is the rainy season in Mongolia and since the quality of the grass it produces affects how well the livestock will do in surviving the winter, I’m always happy to see rain and never think poorly of it even when it goes on for, oh, say, 16+ hours (that was later on after the Expedition).

Mongols don’t generally eat breakfast (the guides do if they’re with a group and sometimes the drivers), but I needed something in the morning. This trip was different because before we left Hovd, instead of a cook having purchased all the food before leaving UB or a town shop en route, the driver, guide and I did the grocery shopping together in the big Nomin Supermarket, which was really fun. The guide and I even chose a couple of bottles of wine and we made sure there were plenty of snacks, yogurt and canned fruit. The driver, who was also the cook, made sure there were plenty of dinner supplies like dried meat (boortz) and noodles for “soup”. The cost for all the food for three people for two weeks was about $100. We’d done the same when Turuu was with us, so I now had a pretty good idea of what everyone liked and what was needed. I was quite happy to find this box of German muesli, which is basically what I eat on weekdays at home. “Cyy” is milk. There were also lots of different kinds of fruit juices available and we had what was needed for morning coffee, so I was set.

The next “episode” will be another day on the road, but one of the more adventurous days of the entire Expedition. Stay tuned….