We now drove on to one of the most famous and sacred mountains in Mongolia, Eej Hairhan Uul. I didn’t know until after we left that this mountain may be as close to Mecca as there is in Mongolia. I was told that all Mongols want to go there once in their life. I’m so glad we did, even though it was not on the original itinerary since I thought it was too far out of our way for the time we had. But our drivers knew the distances and the area and said we could do it, so I was more than happy to go there.

The view of the main summit from our campsite. 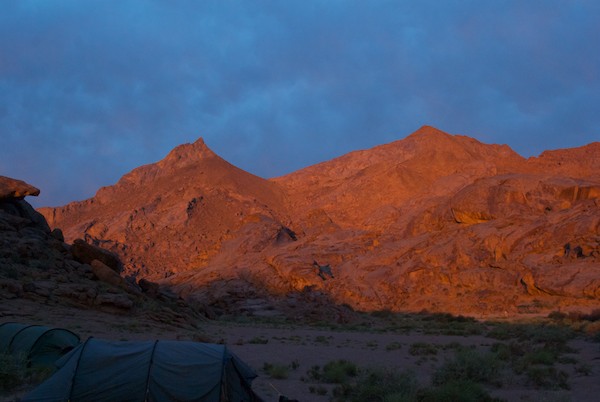 I crawled out of my tent the next morning and was greeted with this incredible sunrise.

It turned out that Batmaa, one of our drivers, knew a hiking trail that he could lead us on. So after breakfast off we went.

Rosehips. We saw just a few rose bushes in one area. They were done blooming but the hips were lovely spots of color. 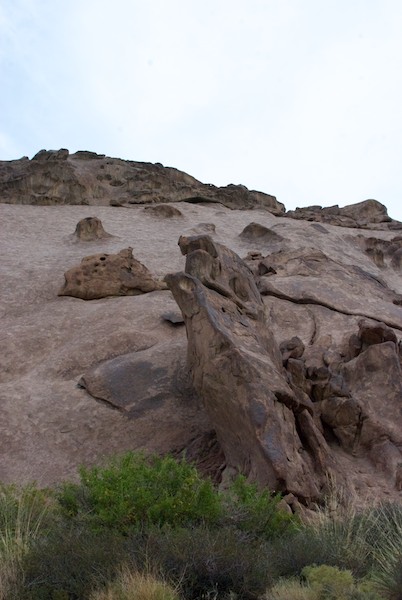 Soon we were among fantastic rock formations.

A famous lama’s retreat from the destruction of the monasteries by Stalinist Mongols in the late 1930s. It is still visited and kept in repair. It was a tight fit and the ceiling was very low, but we all managed to fit inside and sit quietly for awhile. 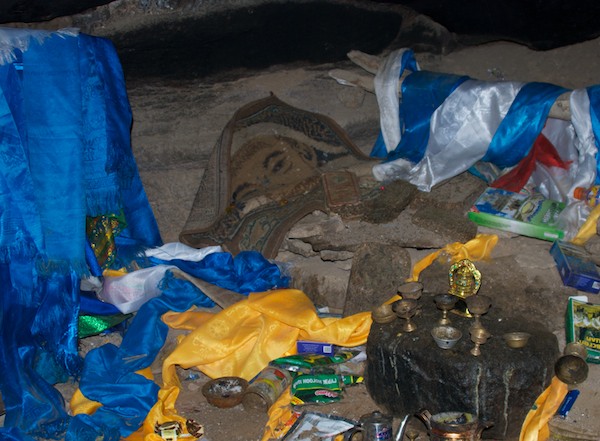 Altar in the lama’s house.

View of the exterior.

A short break before the next “interesting” bit.

There was a long steep slope we seemed to have to go up. Batmaa, our guide/driver walked right up it. I’d done enough clambering around on rocks at Ikh Nart I thought I could do it, but…

I got a little over halfway up the slope, which consists of defoliating granite, and suddenly couldn’t move. I thought about it and realized that I didn’t trust my boots and that if I moved and lost traction it was a long slide down to possible serious injury. I’d read about freezes like this happening, but it was the first time I’d gotten into a situation where it happened to me. Everyone else was still at or near the bottom except Batmaa, who you can see in the distance just standing there easily, and Magvandorj, who must have known what might happen and was ready with a sturdy cable, which he was able to toss to me. Once I had that I was fine and made to the top in less than a minute. A big thank you to Odna who got this photo and sent it to me! I was hoping someone had.

Magvandorj gives Tseegii, our guide, a pull up the slope. Only part of it was really, really steep and of course that’s where I got stuck.

I loved these fluted rock formations and wish I’d been able to photograph them in more interesting light.

We arrived at one of the famous sites on the hiking trail, the Nine Pots, which are a series of descending pools in depressions in the rocks. It must be something after a rain to see all the waterfalls, which have left colorful mineral deposits. 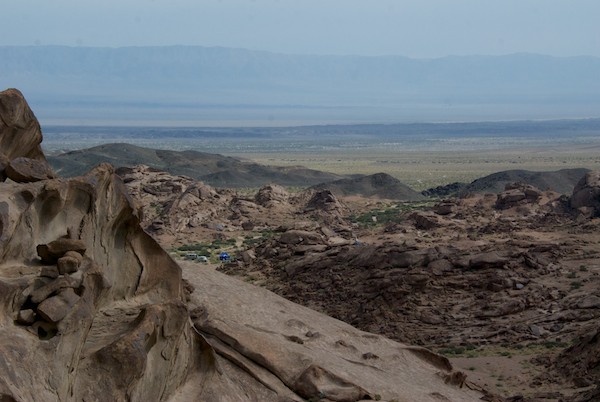 That’s our camp down there. You can just make out our blue dining tent and the two grey Russian vans. 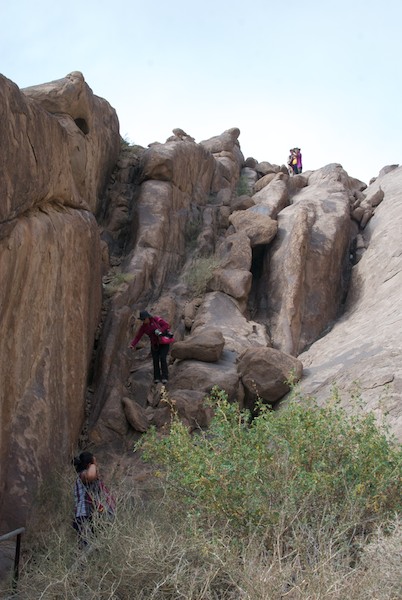 Some of the type of rock terrain we hiked over, across and up and down. From bottom to top: Tseegii, Odna, Tugsoo 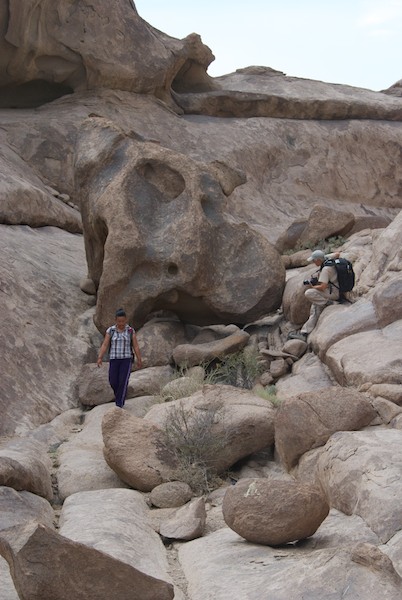 Tseegii and Sharon Schafer and A Big Interesting Rock 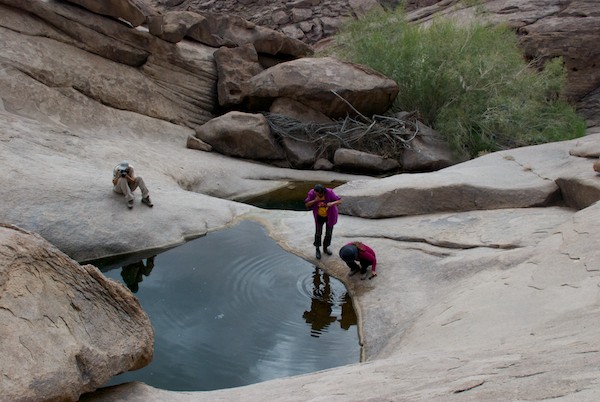 Above the first pool we found more of the series of nine. 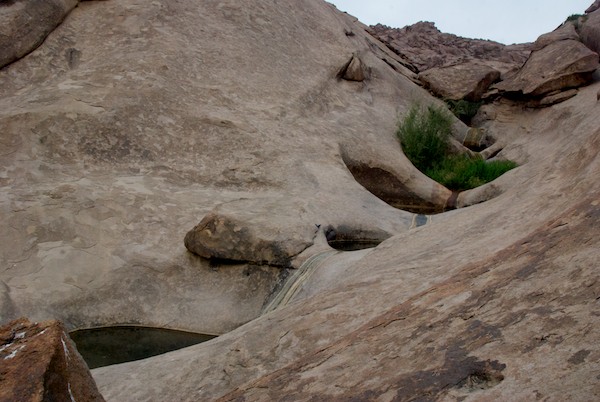 More of the Nine Pots

“Tonsil Rock”. We descended through an area with rock formations that were reminiscent of a variety of things….an elephant and body parts among them. They are the focus of prayers and worship, so are festooned with khadag (the offering scarves), tea bricks, candy, empty vodka bottles, medicine bottles and more. 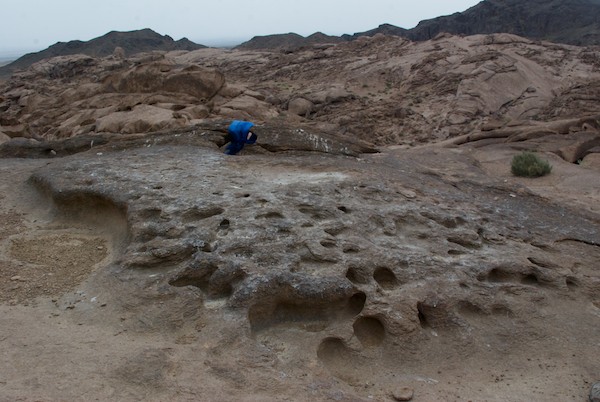 “Horse Hoof” rock, so called because the depressions resemble those that would be made by horses passing through.

Almost back to camp.

Oncoming weather front. The wind was coming up fast and hard. On the right is our dining tent. The green enclosure was our shower. I was one of the lucky ones who got clean before the wind became too strong for it to stay up. 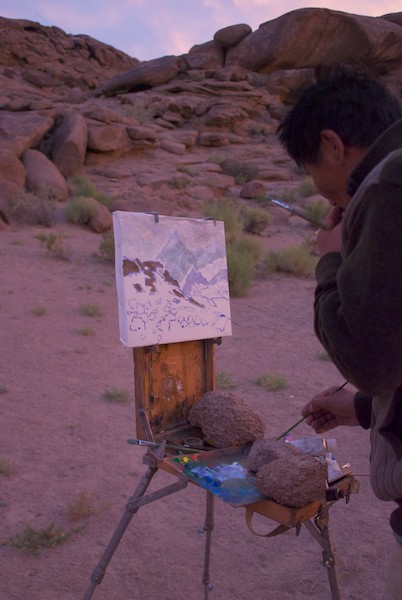 The wind kept blowing but it didn’t stop Magvandorj from painting. 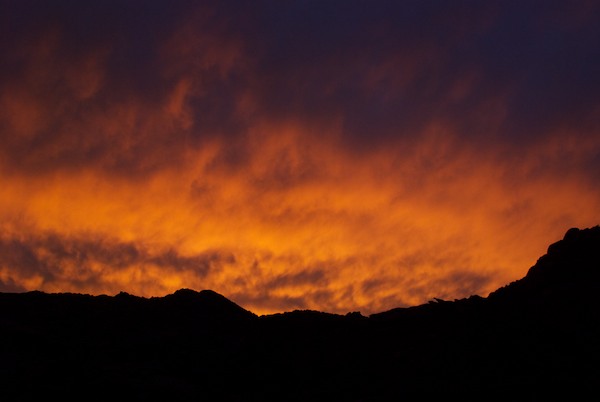 Sunrise. Odna was up capturing it, too.

Magvandorj got his set up done the previous evening, so he was ready to catch the short-lived intense morning light. 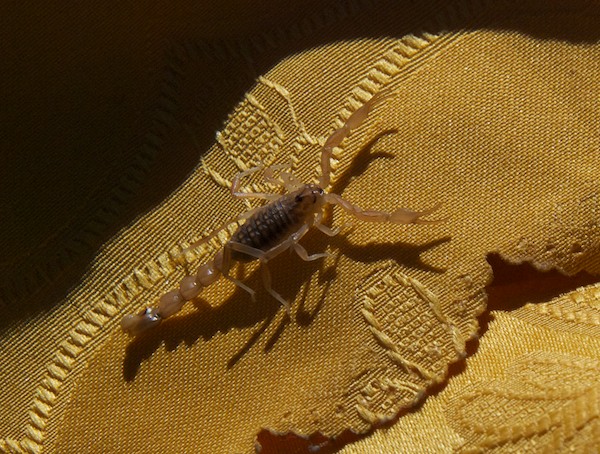 We were starting to pack when Tseegii came out of the kitchen tent holding a tablecloth asking what this was. She’s never seen a scorpion before and, although I knew instantly what it was, I had never seen a wild one either. After the photo op it was set down and allowed to go about its business. 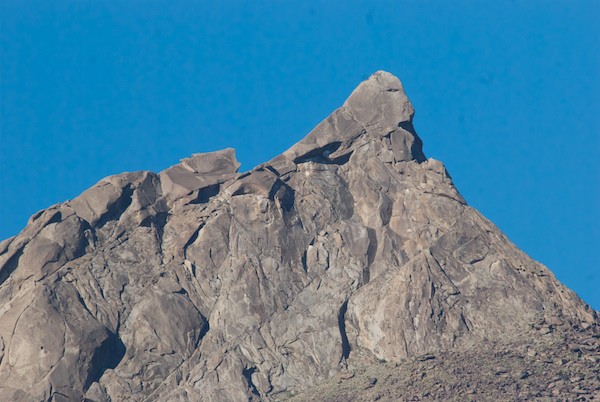 During a short stop as we drove on to visit an area in the Gobi with vegetable gardens and orchards, I got a shot of the very top of the main summit of this very special mountain.