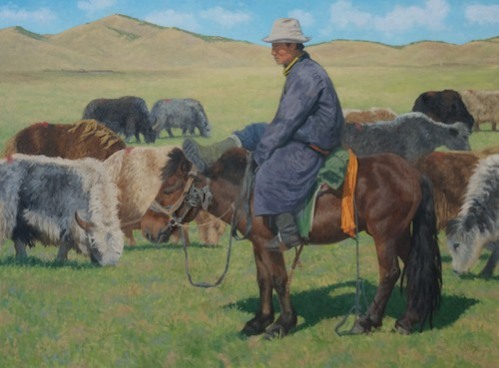 And here it is the "real" finish again for comparison.

I was coming down out of the mountains north of Tsetserleg with my guide and driver while on a one week camping trip last August and off in the distance we saw a large herd of yaks. Of course we stopped so I could get some photos. The three herders who were with them spotted us and came riding over. I asked the guide to ask them if I could take their pictures and they said yes. I knew while I was snapping the shutter that I was going to get multiple paintings out of this chance encounter, typical of travel in Mongolia. 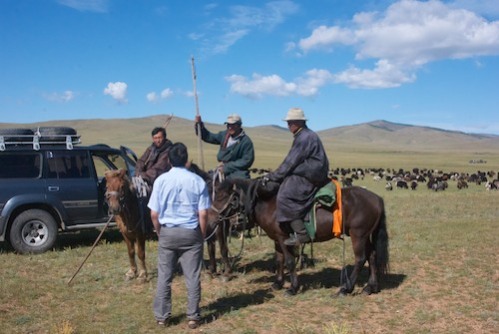 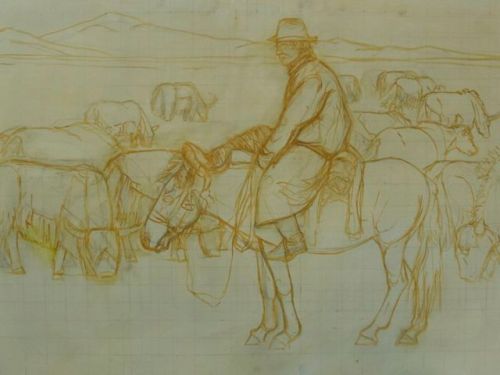 The idea of the painting (and a good painting has only one) was the casual way the herder had laid his leg across the neck of the horse, who seemed to be totally unconcerned. The Mongols' relationship with their horses is really something special, going back, as it does, over 1000 years. They know each other pretty well at this point. The composition was allowed to resemble some I've seen of American cowboys and cattle, only in this case it's malchin (herders) and sarlag (yaks). 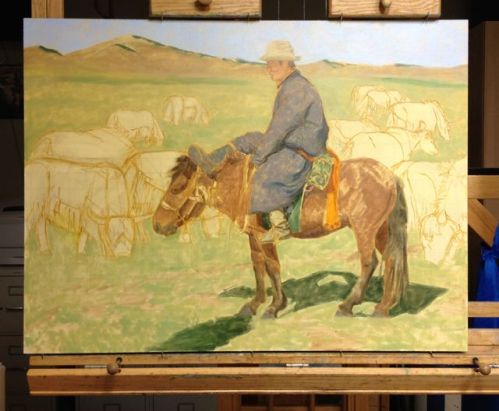 This is after the first pass of laying in color on the herder, horse and landscape. It lets me see how the shapes of the yaks are working. This was the most animals, by far, that I've ever put in a painting, so it became a pretty intense juggling act, making sure that all the parts worked together.

One to two passes of color overall. I'm also using my reference to make decisions about what colors the yaks will be. I wanted the right amount of variety, but not to the point where it drew attention away from the herder and his horse.

Continuing on, working over the whole canvas.

The finished painting. I thought. But I decided that I needed some fresh, knowledgeable eyeballs on it, so I emailed a jpg to two colleagues who, among other things, pointed out that the yaks in the background were not in correct scale. And they were right. They also thought the grey yak's head on the right was odd and I found that, after going back to my reference, that I agreed with them about that too. Back to the easel. One of the reasons I have the working process that I do is to provide the flexibility to make whatever changes or corrections are necessary at any point, even when I think I'm done and have signed the piece. I have no compunctions whatsoever about wiping out or scraping down any part at any time if it's not right.

Here are some detail close-ups so you can get a better look at my brushwork:

His rain slicker and sash 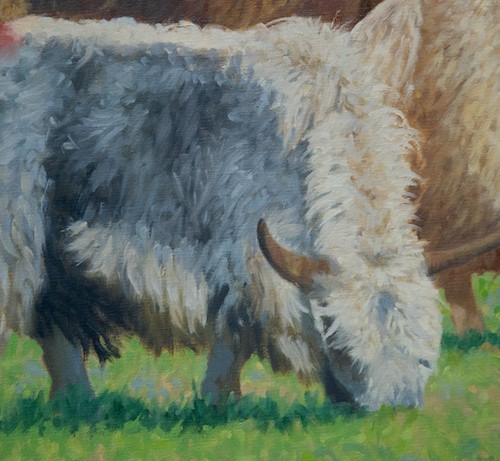 One of the yaks