I had never heard of William D. Berry until I read a post about him over at James Gurney’s blog, GurneyJourney. Holy Cow, was he an incredible field artist! There is a book that covers three years of his field “sketches”, which you can buy here for the princely sum of…$8.50. This really is a book that should be in every animal artist’s library.  One of the nice things he did was note whether or not a drawing was done from memory. If not so noted, they were done from live animals. To say that he thoroughly knew his subjects would be a serious understatement. Here’s a quote from the book on how he did it. Simple, really….

“What this meant was that I devoted a tremendous amount of time and energy to simply recording the facts of animal life – hundreds of hours and thousands of drawings in the zoos or in the forests, on mountains, in deserts, or plains. A caribou, for example, is never going to hold still for you, and a photograph of him, though useful for many reasons, is never going to show him doing exactly what you want him to be doing for a particular illustration (Berry also illustrated a number of field guides and other animal books) . You have to learn the beast inside-out and upside-down, so that you can put him together on the page from scratch and still have him look like he would if you did see him doing just that. So – instead of learning to paint, I was learning a hell of a lot of animals, birds, plants, whatever. I don’t feel I ever did master any mediums, except pencil –  the medium I used to make field sketches.”

He used an Eagle pencil on Cameo paper (anyone know what that is or if it is still available?) which was supported by a clipboard, then sprayed the finished drawings with fixative. Here are a few pages that I particularly liked. Remember, these are all drawn from life (Sigh.): 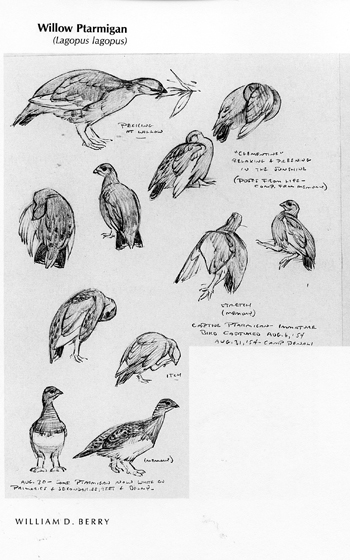 And, finally, one page of color studies.