Contest result: No one got all the noses right. The right answers are: grizzly, bison, moose, turkey vulture, elk.  The person who came the closest guessed black bear instead of grizzly because the muzzle wasn’t dished, but nailed all the rest. This may be because it was a young animal. I went back to my reference and took a good look at my pictures of black bear and I think, in fairness, that I didn’t do a good enough job making it clear in my drawing which was which, so I would like to announce that Heather Houlahan is the winner and will be getting a packet of my notecards. Congratulations and thanks to everyone who entered!

On to mouths. After eyes, the mouth may be the most defining part of an animal’s head. These drawings were done with a Venetian Red Derwent Drawing Pencil. They’re kind of waxy, like Conte crayon as opposed to chalkier, for lack of a better term, like hard pastels. The paper is, once again, vellum bristol.

All of today’s examples are from Kenya.

First up, a reticulated giraffe that I photographed in the Samburu, Kenya in 2004.

Giraffe lips, believe it or not, are very interesting. As anyone who has fed a giraffe at a wild animal park knows, the upper lip is extremely flexible, almost prehensile. What is really impressive, however, is that the mouth is so tough that a giraffe can wrap it’s tongue around a very thorny acacia branch, pull it loose, stick it in its mouth and chew it without a second thought or, apparently, getting punctured.

This is the mouth of a white rhino that I photographed at the Lewa Downs Conservancy, south of the Samburu, also in 2004. Lewa is one of the best places to see these prehistoric-looking beasts. White rhinos, when seen from the front have a square lip. Black rhinos’ lips come to a point. According to Wikipedia, there is no actual evidence that the word “white” is a mis-translation of the Afrikaaner word for “wide”.

This is the mouth and muzzle of a Coke’s hartebeest, a large antelope, which I saw in the Masai Mara, Kenya. It has a very long head. When I enlarged the image to see the mouth better, I was struck by how its shape and the shape of the nose flowed together in an almost art nouveau manner. Just the kind of thing I look for.

Also from the Mara, this is the mouth of a spotted hyena. Their jaws are trememdously strong and can break large bones apart. And, as you can see, are filled with teeth. Studies have proved that they hunt at least as much as they scavenge. They live in female-centric “clans” in a defined territory that they defend against anything, even lions. I really enjoyed watching them and hearing them “whoop” at night. 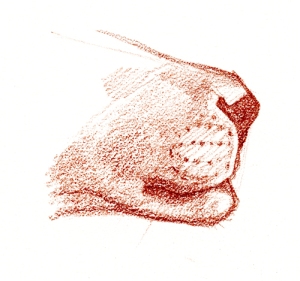 This is the muzzle of a young lion I saw in the Mara. No scars yet and it has an almost soft quality that will change as he gets older.

Finally, I was out in the safari vehicle at dawn, also in the Mara, when we came upon a lioness who was just waking up. She gave us a REALLY big yawn, got up, stretched and ambled off. Keeping everything lined up and in decent perspective was challenging as you can see from the erasure marks. 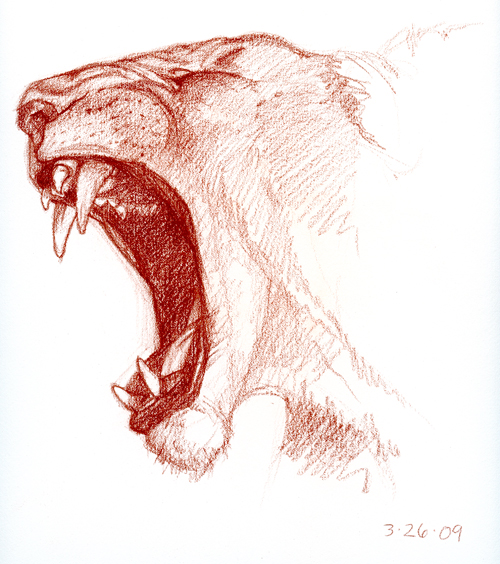 Next week the eyes have it and then I’ll put it all together.