As I did last year, I’ve donated two pen and ink originals for the Explorers Club Annual Dinner auction. This year I decided to do birds that I’ve watched and photographed in Mongolia.
I’ve seen little owls a number of times in a variety of locations…perched on a herder’s storage box near the shore of Orog Nuur, a remote lake in the Gobi, peeking out from behind a rock at Ikh Nartiin Chuluu Nature Reserve and a number of them sitting out by their burrows, which they’d dug into the ruined ramparts of an ancient Turkic settlement, Khar Balgas. Unlike the owls most of us are familiar with in every case it was full daylight.

Hoopoes have a very large range…from Mongolia to Africa to Europe. I have found them to be one of the most challenging birds to get decent photos of. It’s almost like they tease you, letting you get…almost…there and then flying off to the next tree. But persistence has paid off at Ikh Nartiin Chuluu Nature Reserve in the valley where the research camp is located. My subject was one of a family group of three I spotted up on the top of the rocks in the late afternoon. I was able to approach just close enough by working my way towards them behind large rocks at the edge of the valley floor to get a number of photos with my 80-400 lens at maximum range.

Here’s an album of the art I created while I was traveling last month. I had a lot of fun drawing the alligators at the Okefenokee NWR and Harris Neck NWR. They’re good models because they don’t move much. There really is no substitute for drawing from live animals, although I took a ton of photos, too. Other than the one at the top, they’re in chronological order, starting with New York. All but one pencil sketch was done with a Sakura Micron .02 black pen. I used a Pentalic Nature Sketch 7×5″ sketchbook, a very handy size. Drawings on white paper are difficult to scan or photograph. I lightened them as much as I could.

When I got back north and was up in the Hudson River Valley, I visited Olana, the home of American artist Frederic Church. The house wasn’t open but the grounds were. It was windy and pretty cold, but I was determined to do at least a couple of watercolors since the view from the house is famous and has been painted by a number of artists over the years.

I also spent a couple of days with an artist friend at his home in the Hudson River Valley. We spent one morning on location at this lovely pond.

I applied for an Explorers Club Flag last year for my 2015 WildArt Mongolia Expedition and was notified in January that the President and Board would give me that honor. I then was asked which Flag I wanted to take.  After doing some research on the Club website, I made my choices. I was notified late last week which one will go with me to Mongolia. It arrived via FedEx yesterday so now I can break the news….I will be carrying Flag 179, which as been taken out into the field 35 times since 1959. It has been carried to, among other places: Mt. Everest, the South Pacific, the North Pole, Ecuador, the Amazon, Thailand, the Caucasus Mountains, Rwanda, St. Pierre and Yeman. On June 27th it will travel with me to the Land of Blue Skies. I requested this one because one of my sponsors for my application to join the Club, Stephen Quinn, took it to Rwanda where he searched for and found the exact location where Carl Akeley painted the study which became the background painting of the mountain gorilla diorama at the American Museum of Natural HIstory. Steve painted his own study from that same spot and I got to see it when I visited his home. So I am now the second artist to carry this Flag.

There is also Expedition news! I’ve been offered the opportunity to join two argali researchers, Dr. Barry Rosenbaum and S. Amgalanbaatar, to observe and record the capture, collaring and release of Altai argali for four days at Hokh Serkhiin Nature Reserve. I will be flying from Ulaanbaatar to Ulgii in the far west on July 16. Joining me will be a young Mongolian artist whom I met last year, Tuvshintur. We’ll be sketching and painting in the field for three weeks as we visit a variety of wildlife destinations. You can find out more on the Expedition page.

More on The Explorers Club, founded in 1904, here.

The weekend festivities are over and The Explorers Club Annual Dinner was everything I’d hoped it would be. It was a full schedule, starting with a New Members Reception on Friday afternoon. But first I went to the Club the day before when it wasn’t crowded and explored the building from top to bottom. You can take a virtual tour here. I wanted to find one specific item, shown above- the Flag carried by Roy Chapman Andrews to Mongolia during his Central Asiatic Expeditions in the 1920s.

I also found this photo of him. Almost all the others are studio portraits. I love that his shows him in Mongolia out in the field. The domestic nanny goat is nursing what I think is a baby Mongolian gazelle. The Explorers Medal is the highest honor bestowed by the Club. Other recipients have included Admiral Peary, Jane Goodall, Thor Heyerdahl, the crew of Apollo 8- the first men on the moon, Sir Edmund Hillary, Mary Leakey (for the Leakey family), George Schaller, Michael Fay, Edward O. Wilson, Sylvia Earle and James Cameron.

Club headquarters, particularly the staircases, is filled with art, much of it created during expeditions. Unfortunately almost everything was either under glass or there was glare from the lighting, but here are a couple of examples:

The one above was painted on location in Africa by William Robinson Leigh as a study for a diorama painting. The watercolor below is one of a series done on location in Antarctica (I couldn’t read the name of the artist).

There are many rooms, all filled with art, artifacts and objects brought back from over 100 years worth of expeditions. The “Trophy Room” has been the subject of some controversy over the years, given today’s awareness of endangered species. But at one time expeditions were sent out by major museums like the American Museum of Natural History specifically to collect specimens for display. Hunting was viewed differently in those days. The mounts and skins in the room were donated in good faith and will probably stay where they are.

Here’s a corner in one room with a bucketful of spears and a portrait of Teddy Roosevelt, who was a member of the Club. 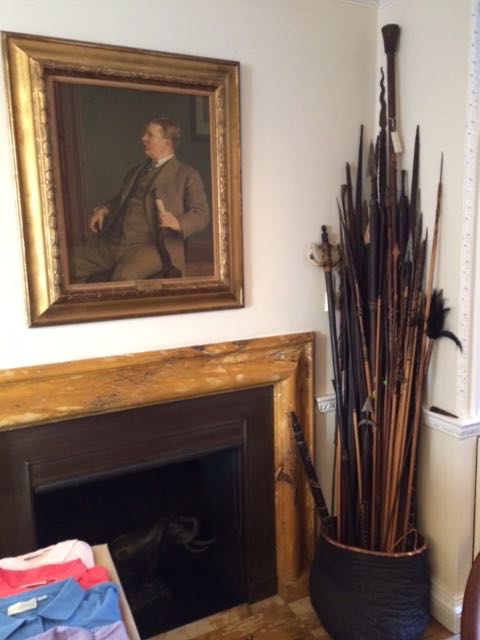 The weather took a twist on Friday afternoon with quite a snowstorm. New York City got close to 4″ in a fairly short time. It made getting around pretty interesting for this native coastal Californian.

Friday evening the festivities officially kicked off, snow or not, with a cocktail party on the hanger deck of the USS Intrepid, a WWll-era aircraft carrier, which is now a floating museum. I was having too much fun, plus trying to find some people who I knew had been to Mongolia, to take many photos, but here’s one of an Avenger. Its wings fold up so that more would fit on the carrier. 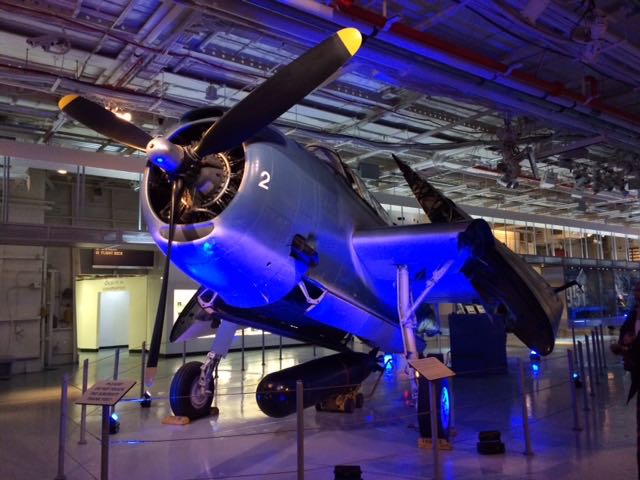 The next day my artist friend and colleague Alison Nicholls and I had time to go visit the Salmagundi Art Club, one of the oldest art clubs in the country, having been founded in 1871. We poked around the Library, checked out the newly and beautifully renovated main gallery space and enjoyed the original art hanging on the walls. There was still plenty of snow on the ground and Central Park was really lovely. 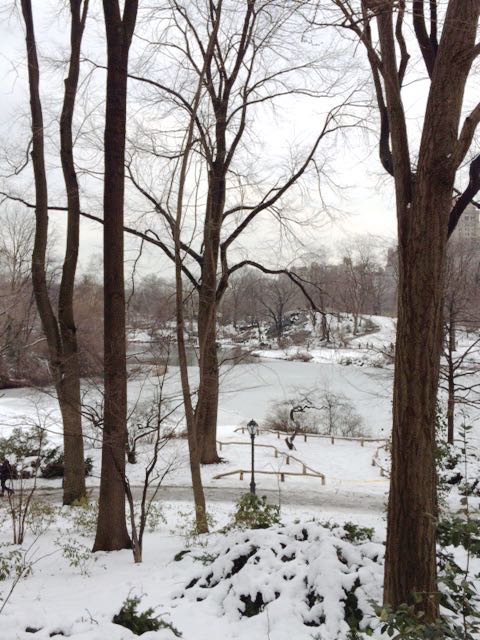 Saturday evening finally arrived and it was time to go to the American Museum of Natural History for the 111st Annual Dinner. It was pretty chilly but we stopped long enough so that Alison could get a photo of me at the museum entrance. I made a dress to go with a vest I brought back from last year’s trip to Mongolia and wore a pair of gold-stamped red leather Buryiat Mongol boots with upturned toes. I also carried a felt purse which was a gift from Ikh Nart Is Our Future, the women’s felt craft collective which I help support. It has an embroidered patch of the Ikh Nartiin Chuluu logo on it. 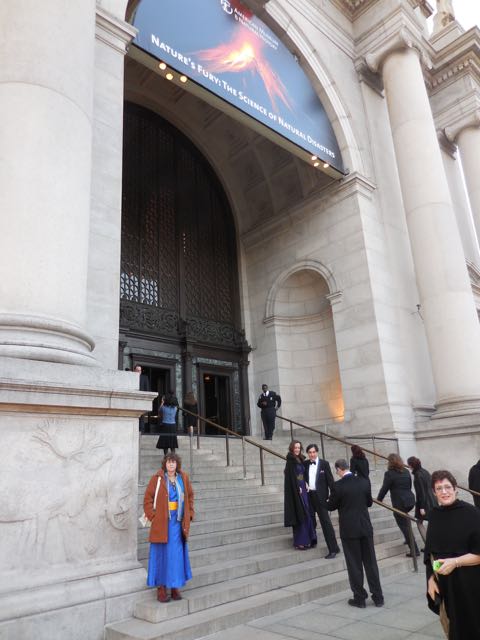 Inside, an old Explorer Club tradition was being carried on…serving what for westerners is extremely unusual and exotic food. There used to be an entire buffet, but now days it’s one dish. This year it was….tarantula meat in a kind of a casserole. No, I didn’t try it. I didn’t want to wait in line. But I did take a photo.

Also in the entry rotunda were two fossil dinosaur skeletons lit up in glowing purple. Quite a few of the attendees were wearing clothing from other countries, so I fit right in.

The before dinner gathering was in the famous African Hall. One really had to be there, but these will give you an idea of what it was like to party in one of the world’s great museums: 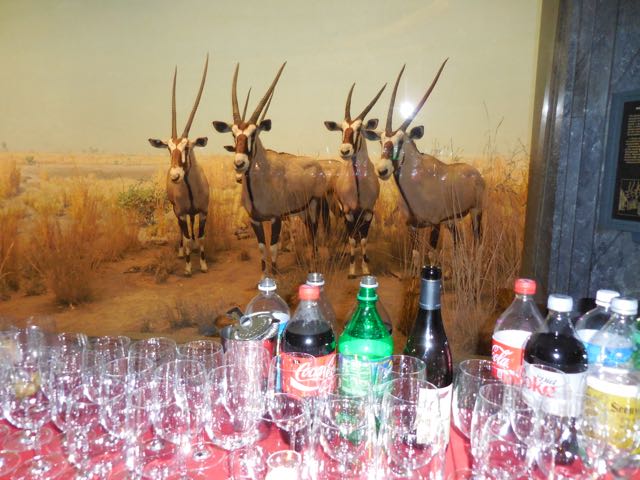 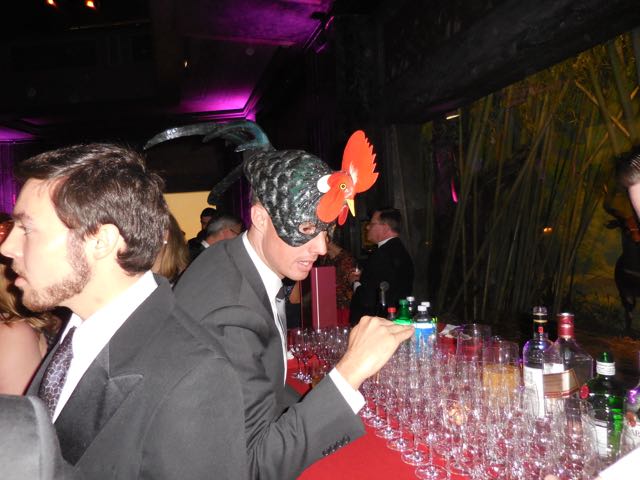 The pre-event announcements had said that we would be “dining under the blue whale” and they weren’t kidding. Here’s the view from our table in the Milstein Hall of Ocean Life. The lighting on the full-size model of the whale was almost unearthly. Appropriate for an ocean creature.

One of the main orders of business for the evening was the giving of awards and honors. Mendip Singh Soin, who is a good friend of Jan Wigsten, one of the partners who owns the tour company I work with, Nomadic Journeys  (small world story), received a Citation of Merit. I had chatted with him the previous evening, so it was fun to see someone I’d met on on the podium.

The highest honor that the Explorers Club bestows, as I mentioned above, is the Explorers Medal. You can read the full list of previous recipients here. It is long and it is illustrious. And this year the honoree was *drum roll* Neil deGrasse Tyson.

We were way in the back of the room, but I managed to get a few photos of him giving his acceptance speech. And that concluded the formal program. Everyone, or at least it seemed so, adjourned back to the African hall for more merriment and visiting. We stayed to the very end and made our way out after midnight. And so ended my first-ever Annual Dinner. And I don’t plan for it to be my last!

I am proud to announce that I have recently been accepted as a Fellow of The Explorers Club!

The Club, founded in 1904, has always been the premier organization for explorers and also scientists who do research in the field. Its members have included Admiral Peary, Jane Goodall, John Glenn, Dian Fossy, Lowell Thomas, Chuck Yeager, Sylvia Earle and Roy Chapman Andrews (who has been a personal inspiration to me for my travels in Mongolia and who received the Club’s highest award, The Explorers Club Medal, in 1932).

I am honored to join a number of my Society of Animal Artist friends and colleagues as a member, one of whom graciously consented to sponsor me.

I’ve posted the Exploration Resume which was part of my application and also the images of me and my art that were included.