We camped within walking distance of a Bronze Age grave complex that the local people call the “Chess Stones”. I first saw them in 2014 on another trip to Erdenesogt because my driver, Erdenbat, our Land Cruiser driver for the Expedition, had been my driver then and knew about them. I did a few drawings in my journal and didn’t think about seeing them again, but here we were.

The big change from the previous stop was the addition of these plaques, one in Mongolian and one in English, mounted on a granite base. The “real” name for the stones and burials is “Shatar Chuluu”. It was interesting to experience the complex just as something that was out there on the landscape and the second time as something that had this official recognition 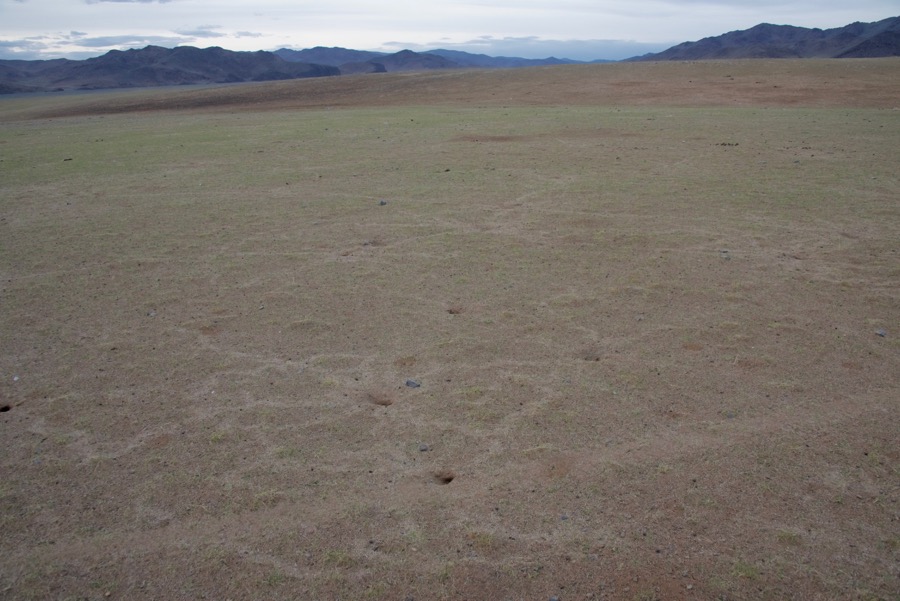 We set up camp in this grassy area and I noticed all these little dirt lines, many quite straight and forming interesting patterns, like miniature Nazca lines

That evening Kim produced, to my utter surprise, a bag of marshmallows that she’d brought all the way from California! A fire was quickly set going in the stove. The Mongols, as near as I could tell, had never seen them before. But as soon as Oliver found a piece of wood thin enough to use, Erdenebat saw exactly what was needed, found a length of heavy wire and formed it into a roasting rod

Kim demonstrating the fine art of roasting marshmallows, while Oliver waits with the wire holder. The three of us Americans discussed our various preferred ways of cooking them. I like to do it pretty quickly, but without charring them black

Erdenebat took a turn as Puugii looks on. Soyoloo joined us and everyone had at least one or two. It was a really fun surprise after the long haul from the Gobi 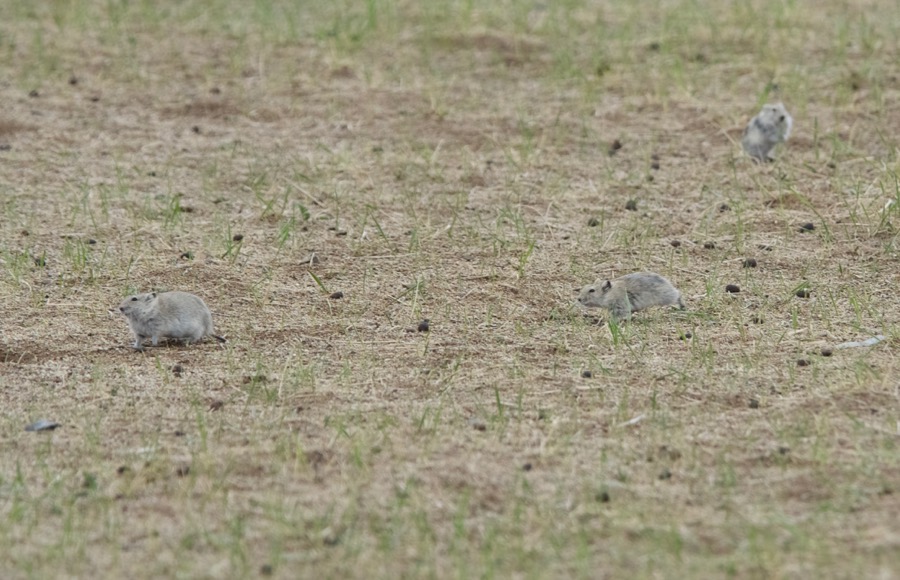 The “Nazca lines” mystery was solved the next morning. We’d set up camp right in the middle of a very large colony of Brandt’s voles. About hamster size and very fluffy, we could just sit in front of the dining tent and watch their antics 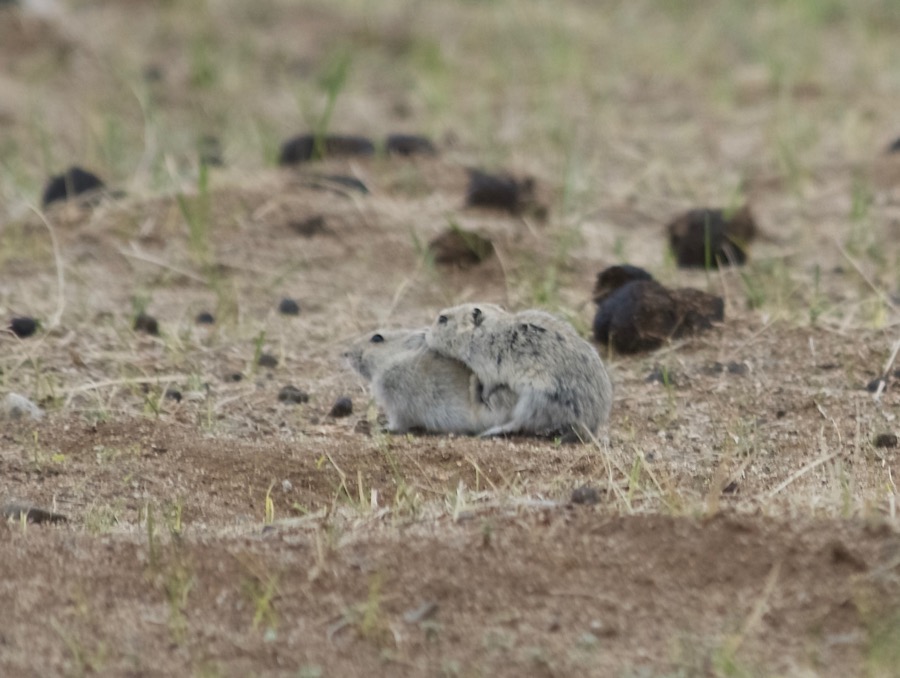 Which turned X-rated, causing Kim to call out at them “Get a room!”

A few popped out of the ground just a few feet from where I was sitting. This is not cropped

The presence of so many possible menu items drew a variety of raptors, including this black kite. I also photographed a saker falcon, an upland buzzard and a booted eagle, all circling around our campsite 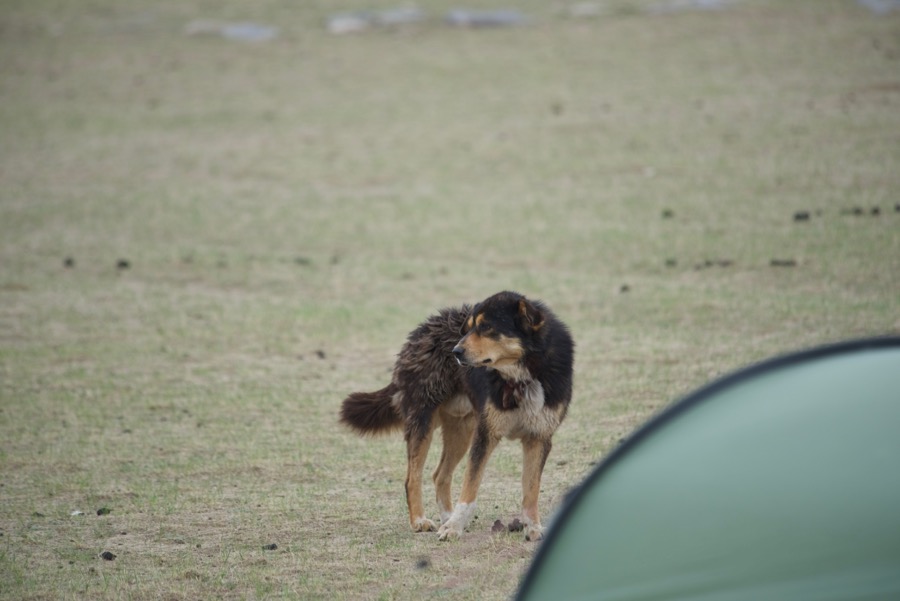 During the day a dog showed up 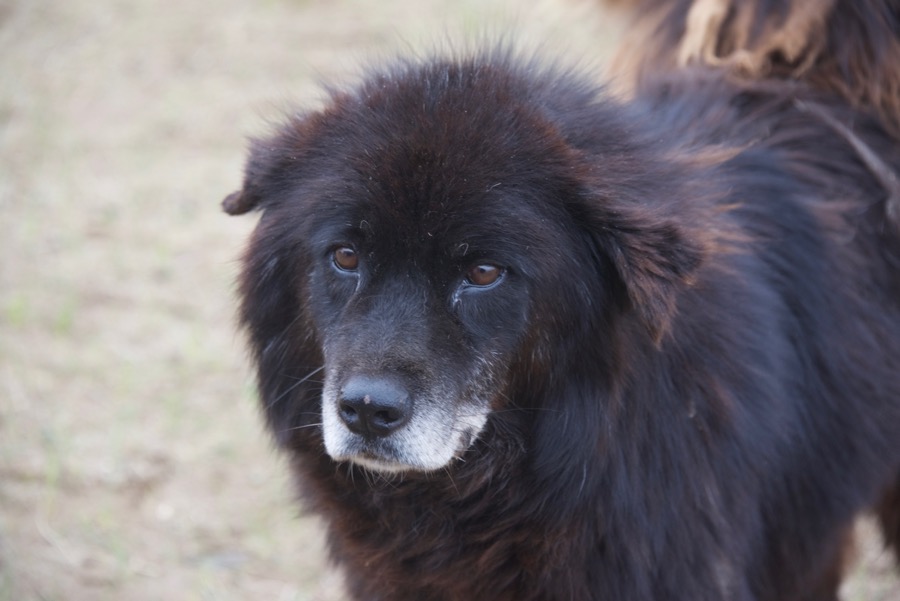 Then a second one. I figured they had a home ger somewhere in the area, but they more or less moved in with us while we were there. First time in all my camping trips that we had our own temporary “ger dogs” 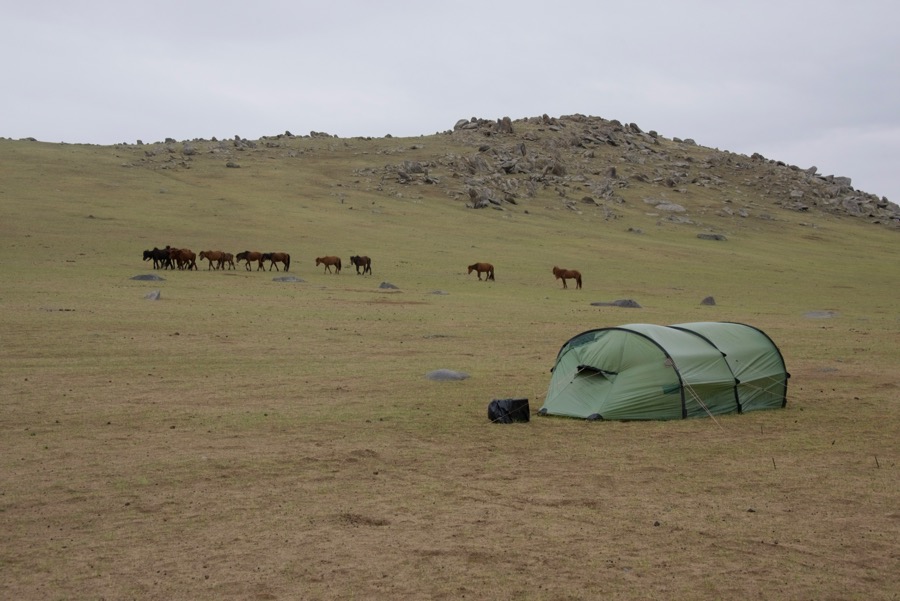 A local herder’s horses came and went past the camp a couple of times, something I always enjoy 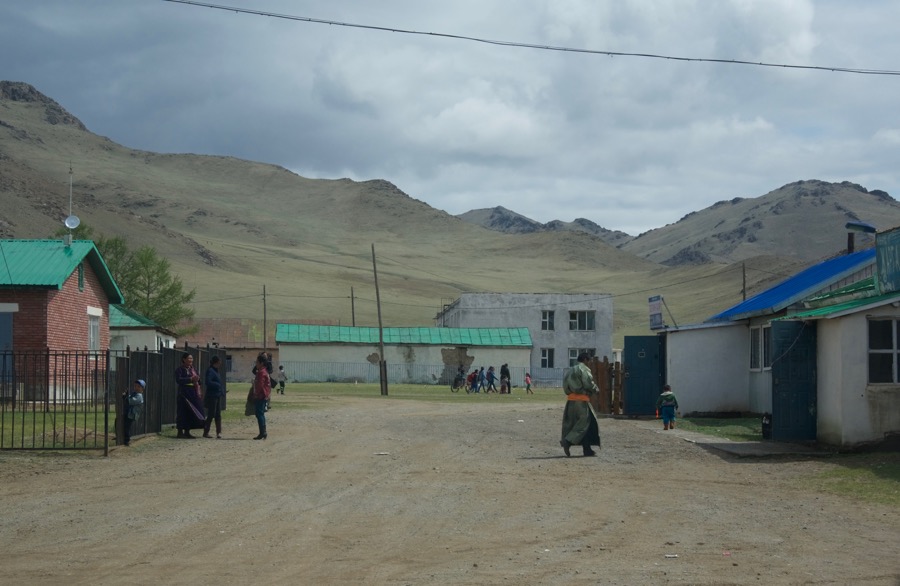 We had made arrangments on a first trip into town to interview the head lama for a short video piece Oliver wanted to do. I’m usually in and out of soum centers, there just long enough to get gas, do any required shopping and then leave. But this time we’d go back and spend most of the day and I would get to see my favorite monastery, Gachen Lama Khiid, again. 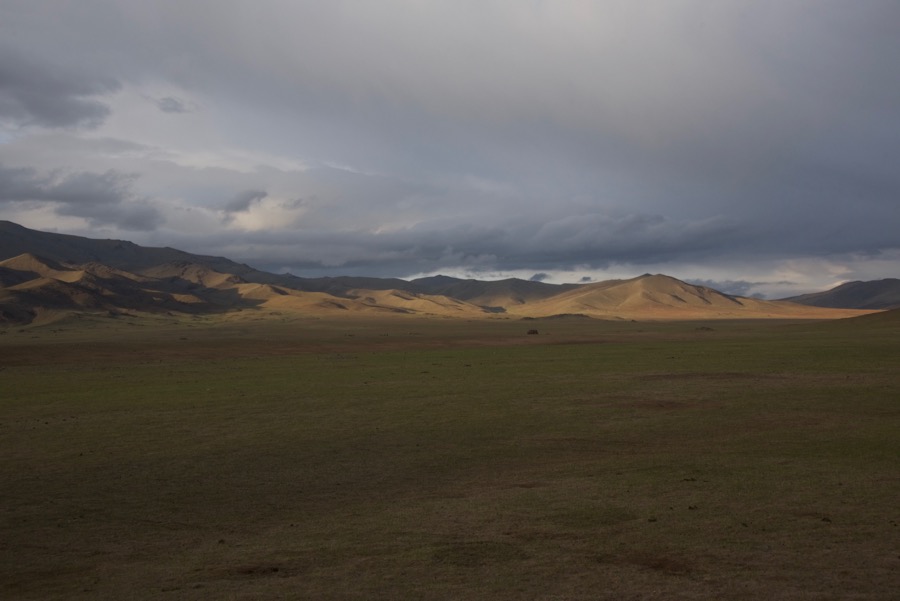 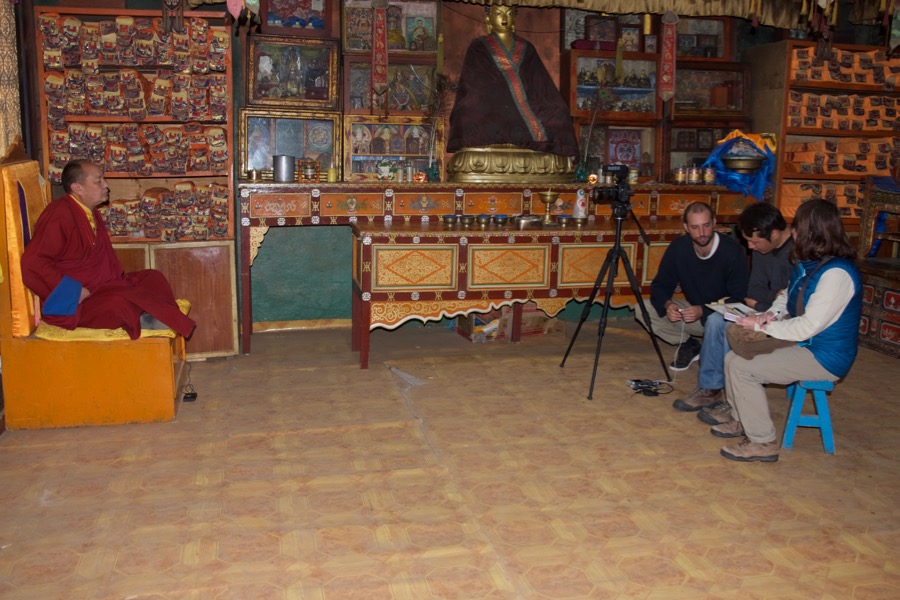 It turned out that we were in Erdenesogt on an “auspicious day”, which meant that there would a service with the monks chanting sutras all day long. The head lama of the monastery made time for Oliver’s interview, which we really appreciated 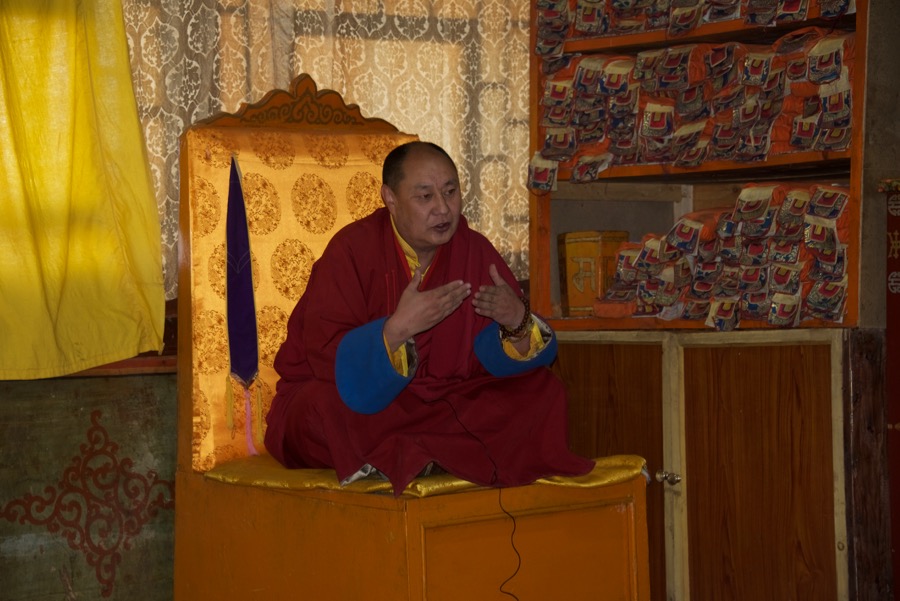 He explained the history of the monastery, which was built in 1901. Around the Buddha on the main altar of the old temple, seen above, were cases containing objects and artifacts that had been saved from destruction in 1937 when nine of the ten temples were destroyed, leaving only the one we were in 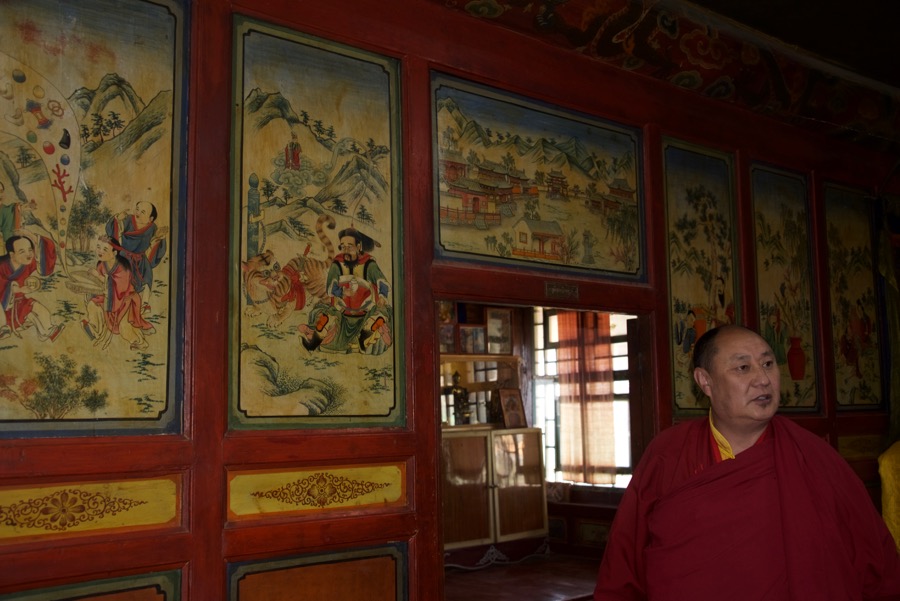 He gave us a tour of the old temple, pointing out one painting, the tall one on the left next to the doorway, which had been painted by a Mongolian artist. All the others were done by Chinese artists. His father had been the head lama also and we could tell he was very proud to have inherited the job. After the tour was over he had us to him home for lunch, a real treat! Erdensogt Soum, it turns out, is well-known for its tsagaan idee…white food or dairy.

While Oliver shot video and Kim stayed to watch the service, I took my watercolors and walked down towards the river (photo by Batana Batu)

This is the scene I was looking at… 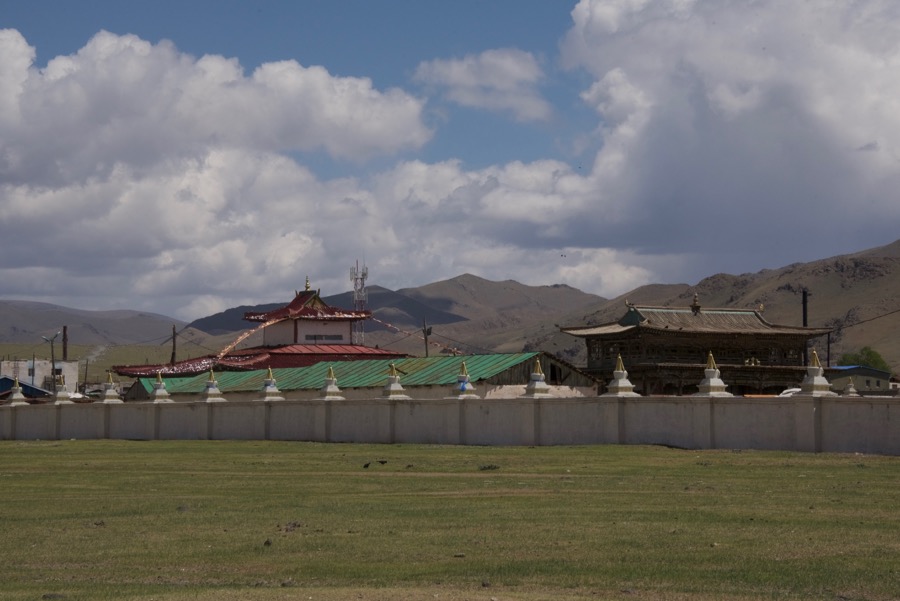 Looking back towards the monastery. The old temple is on the right and the new one on the left. When I first came there in 2010 there was no wall around the perimeter 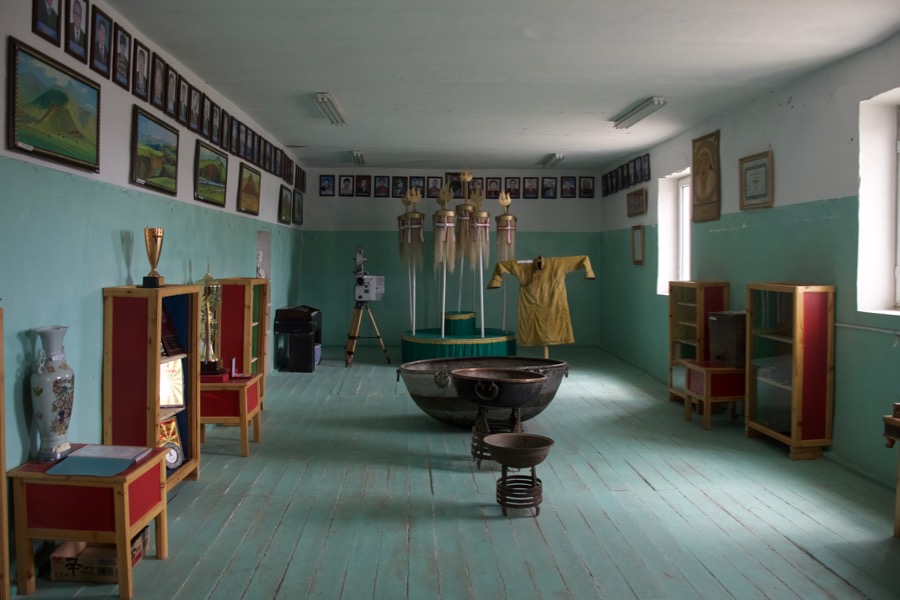 It turned out that the monastery wasn’t the only sight in town. The lama also took us to the local museum. Small, but with a lot very interesting things like vintage  garments, a hand carved wood chess set and a very large old movie projector. The horse hair standards in the back would be brought to the local stadium for the annual naadam festival or other special occasions

We all hiked up onto the hilltops to the south of camp to watch the sun go down. That’s Soyoloo enjoying our last evening there

Before leaving the area we drove back to the Bronze Age Shatar Chuluu stones so that I could see the lions. And there they were 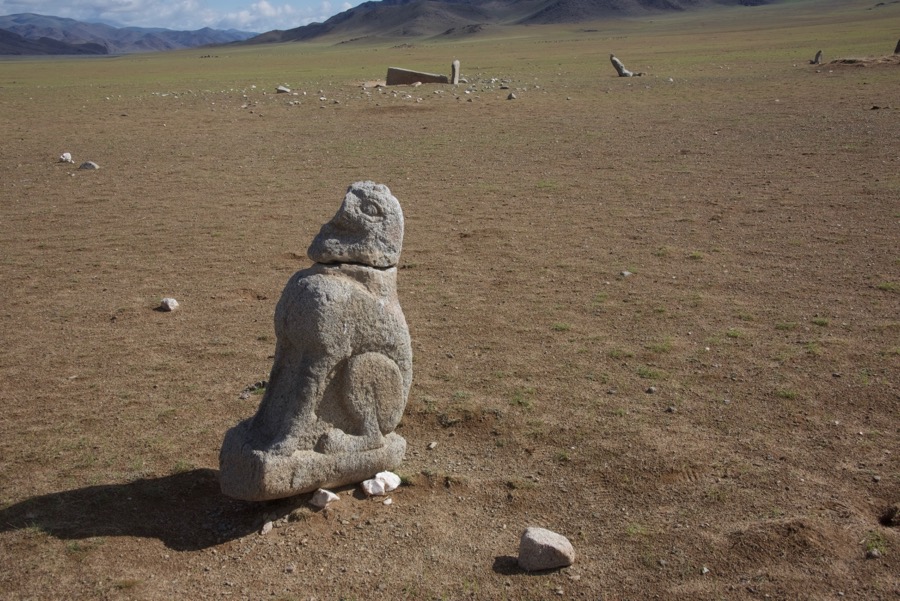 Close-up of lion with barrow tomb in the background 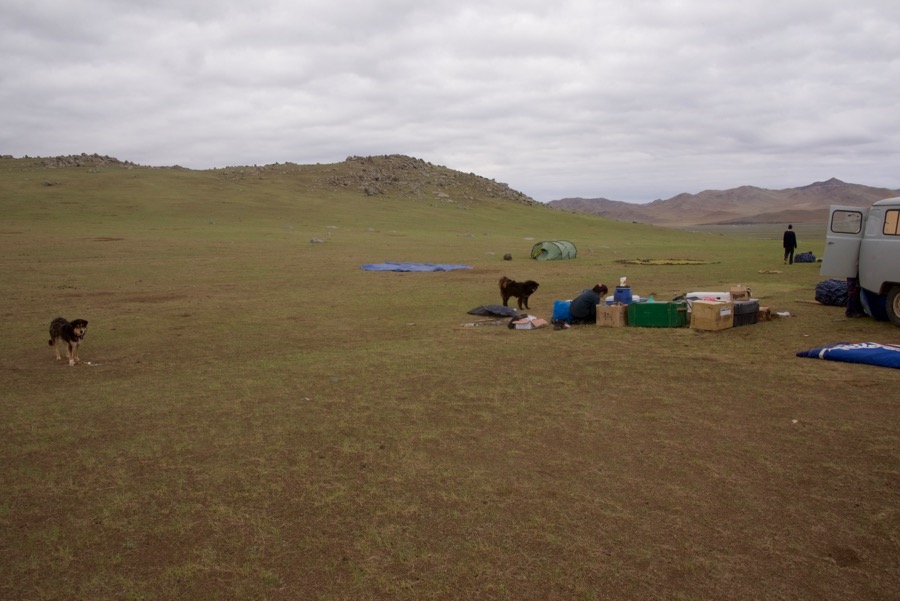 Breaking camp. “Our ger dogs” hung around until we drove off then trotted off towards the river. I last saw them approaching a ger, so knew that’s where they really lived 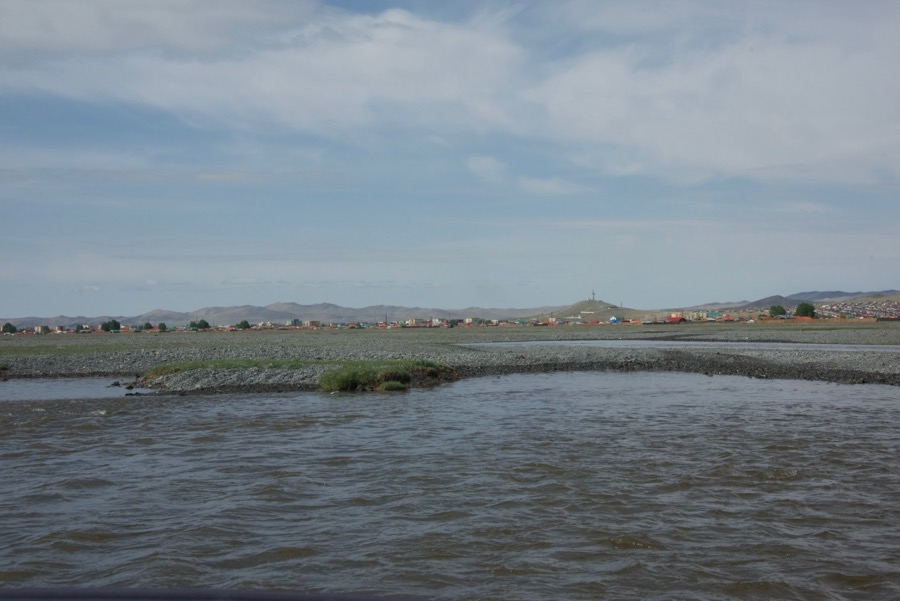 We’d experienced a hellacious rain and wind storm the night before, as violent as anything I’d experienced in ten years of travel in the Mongolian countryside. I wondered what the river would be like and of course it was running quite high. But our trusty Land Cruiser made it just fine. The van stalled out 2/3s of the way across, but Puugii got it going and also made it just fine. Ahead in the photo is Bayanhongor.

Summertime on the road in Mongolia. Love it!

I’ve had Soyoloo as the cook a number of times but this was the first time I’d seen her heat up water for lunchtime ramen noodles in a pot on a cooktop placed on the top of the van’s engine compartment.

Summertime on the road in Mongolia! Uh oh. That was a very dark looming front ahead. Would it mean it was raining where we would be stopping to camp? As it turned out, no, we went into the rain and wind and came out the other side, but it had clearly gone through the place where we finally stopped for the night.

The old and new… one man on his horse and the other on a motorbike. 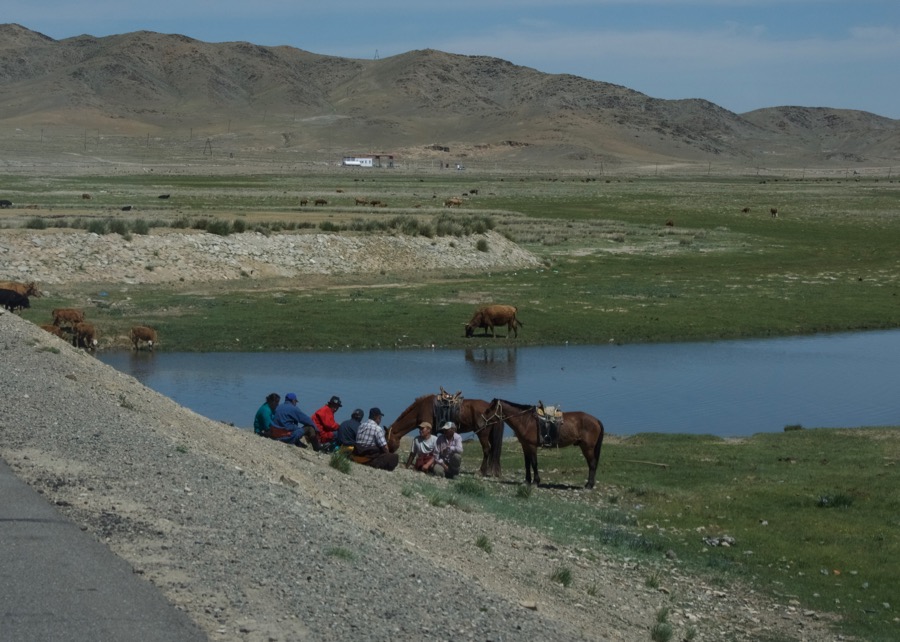 Visiting beside the Tuul Gol (river) 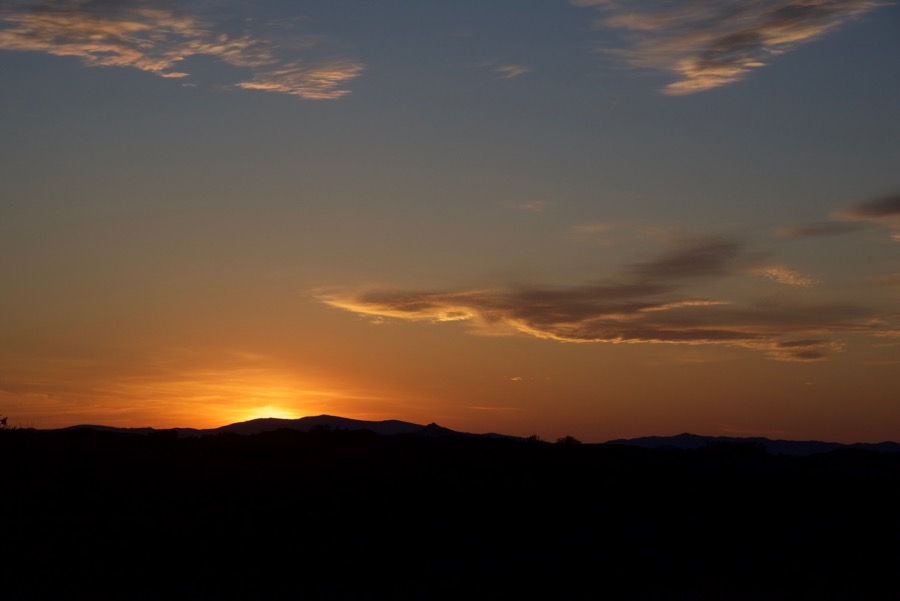 The end of another day on the road in Mongolia

Next week is the final stop for this year’s Expedition…the Mongolian Bankhar Dog Project, located near Hustai National Park and that means takhi too.