Part One Of Two, In Which Susan Buys Her Very Own Ger…

The roof-ring, “toono” in Mongolian,  for my ger is the smaller one inside the larger orange one. I had originally planned to get the traditional orange, but Shuka (see below) observed that the clear wood was better because one could see the quality of construction. He’d already reconnoitered the various ger sellers before I got there and had picked this one as having the best quality for the money. I ended up really liking the feeling of the interior structure with the decorative painting on the lighter color.

On June 15, exactly one month ago, I got to spend some of the most fun hours I’ve had in eleven years of traveling to Mongolia, buying a ger at the Narantuul Market in Ulaanbaatar.  Not to bring home, but to use at one of my favorite places in the world, Ikh Nartiin Chuluu Nature Reserve in Dornogobi Aimag, which I went to on an Earthwatch project (still going strong) on my first trip to Mongolia in 2005.

Before I left home, calls were made for me to get price estimates so I would know approximately how much things would cost. As it turns out, it’s impossible to get traveler’s checks anymore and foreigners are limited on how much money they can take out of an ATM per day. So I carried $1500 in cash with me, which was converted into tugrik, the Mongolian currency, before we went to the market.

I didn’t do this on my own, but had the expertise and assistance of two Mongols. One, Dr. Amgalanbaatar Sukhiin (Amgaa), is the Director of the Ikh Nartiin Chuluu Nature Reserve Park Administration who I’ve known for eleven years. He granted my request to be able to set up a ger in the reserve, designated some choices for the location and helped with the shopping (talking to the sellers, carrying the money and paying for things) and the set-up. The second is Batbold (generally known by his nickname “Shavka”), a herder who lives with his family near the reserve, in a ger, of course. He was kind enough to drive his truck to Ulaanbaatar, help with all the purchases, transport everything back to Ikh Nart and help with the set-up. This dream come true would not have happened without them, along with other helpers you’ll meet next week.

“Ger” means simply “home” in Mongolian, but it’s generally associated with the round “felt tents” that the Mongols have lived in for over a thousand years. It’s a structure that is perfectly adapted to conditions in the Mongolian countryside. I thought of buying and living in one for a week to ten days a year as a kind of final exam to see how much I’d learned over the years staying at the Ikh Nart research camp, tourist ger camps and visiting many herder families. 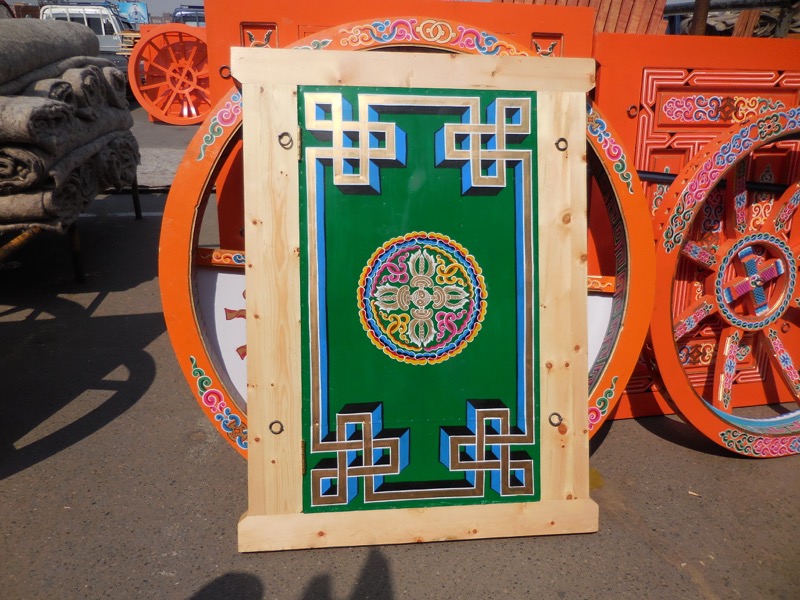 The exterior of the door, “khalgaa” in Mongolian. An unusual color and design that I hadn’t seen before. The doors come already framed in.

The vertical supports, called “bagana”, being carried to the truck. 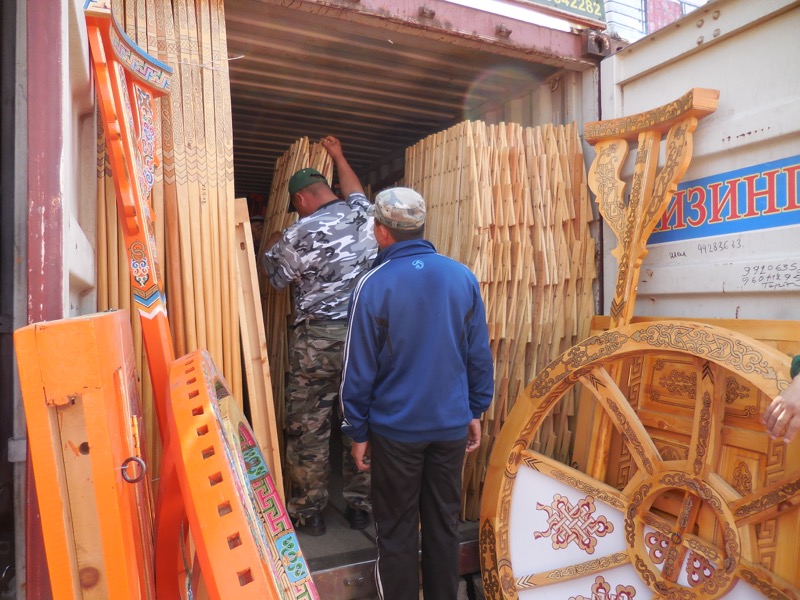 I bought a “four wall ger”, which means four of the standardized wood latttice walls, called “khana”. Gers are described by the number of walls, which also indicates how big in diameter they are. Shavka is picking out four sections.

Bringing out the felt cover. I bought one layer since it’s summer. More layers can be added as the weather gets colder. It’s a tremendous insulator. That’s Dr. Amgalanbaatar in the green jacket. 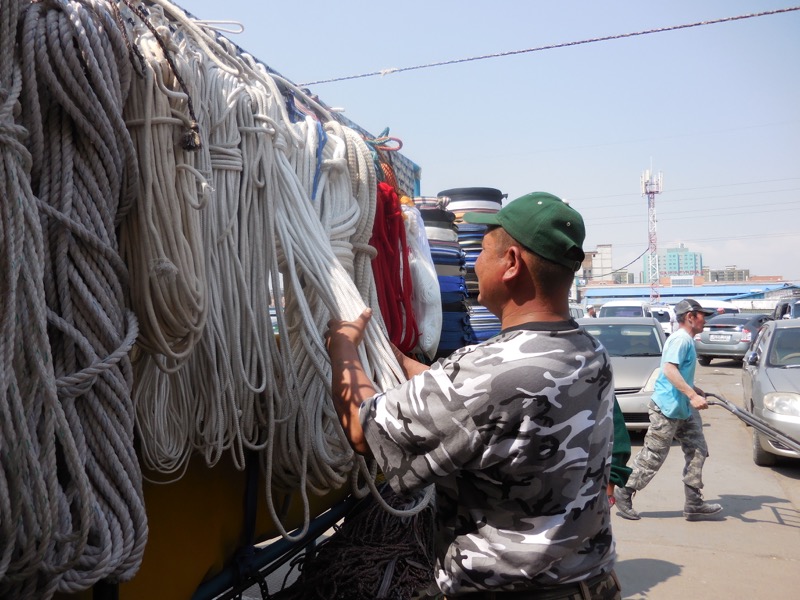 Choosing sturdy rope for holding the rocks that will weigh down the ger to keep it in place when it’s windy. 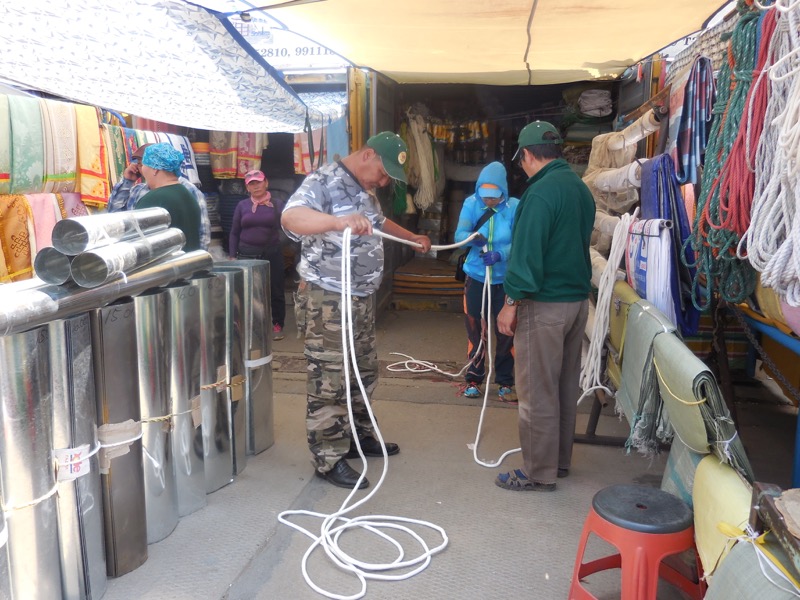 Measuring out the rope. Shavka was very particular about every aspect and item. 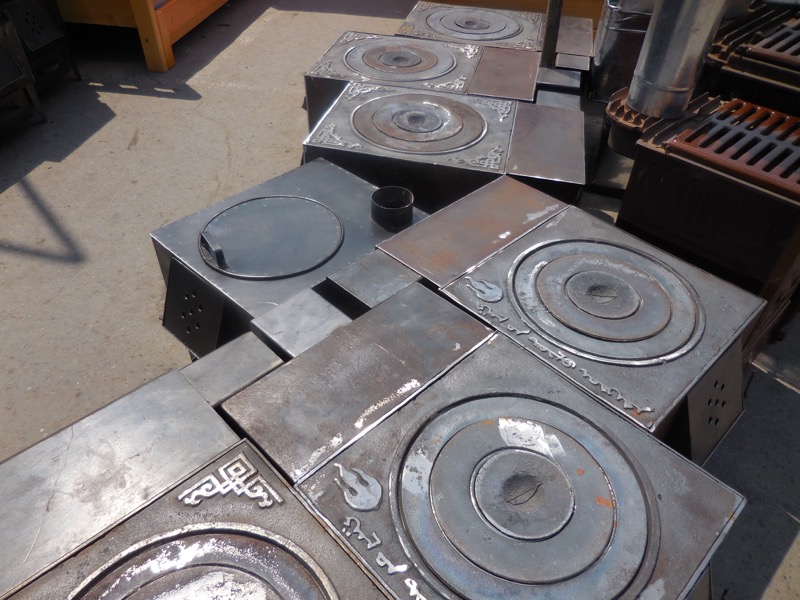 Ger stoves. There are lighter, thinner ones that are for summer use and heavier, thicker ones that are used in winter. I chose the latter to not foreclose the option for cold weather use. There were two designs to choose from. I went with the one that had the flame motif and the vertical Mongol script, called “bichig”.

Stovepipes. They come in two sections to be assembled in the ger. There’s also a sheet metal piece that fits onto one of the openings in the toono which has a pre-cut hole for one.

Sink stands. How to have running water in a ger. Mostly I’ve seen these in tourist ger camps, but having one for mine made sense and it came in very handy. I chose the one on the front left. I also bought a bucket which went underneath the sink to catch the water. 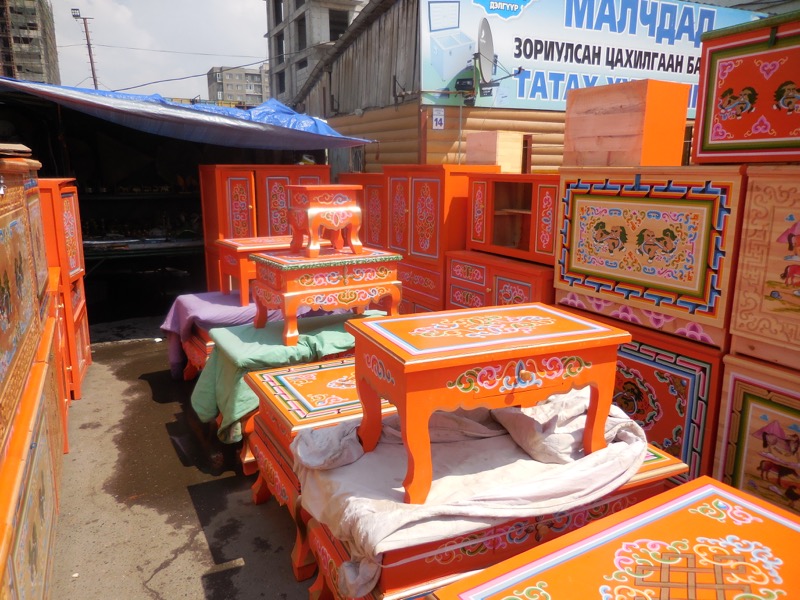 Ger furniture in the traditional orange. I bought a bed, a table, two stools and a cabinet. 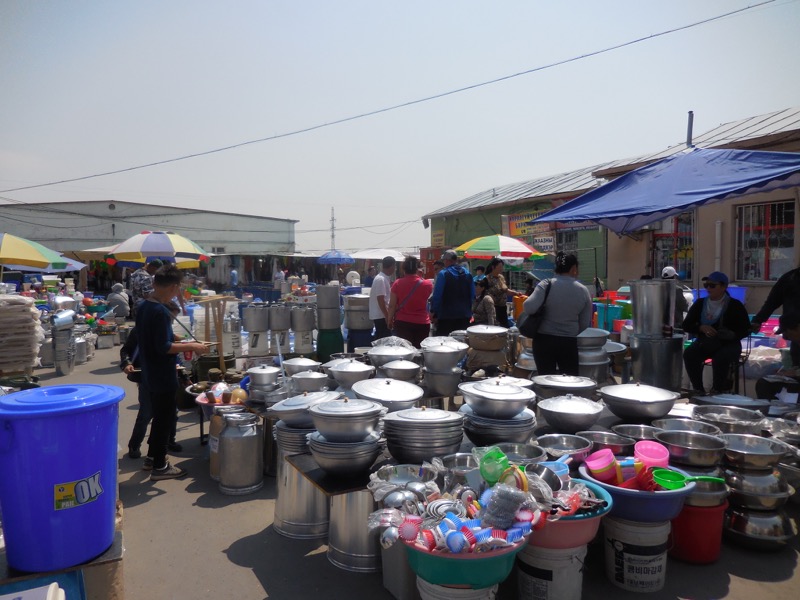 Kitchenwares. I got one of the aluminum pots with a lid like you see in every ger.

Water container. I purchased a LifeStraw gravity feed water filter before I left home. The idea was that I would be provided with well water (for that I purchased two yellow rectangular containers that could be carried on a motorbike). The 5 liter filter bag would be filled from those and drain into the container that Shavka is holding. It worked quite well and drinkable water was no problem.

Plastic sheeting. There are two ways to rainproof a ger. One is covering the roof (and sometimes the sides) with what is called “Russian canvas”, heavy waterproof cotton. A bundle of it was included in the price for the ger. Shavka also bought enough of the plastic to cover the whole ger. And it was a good thing… 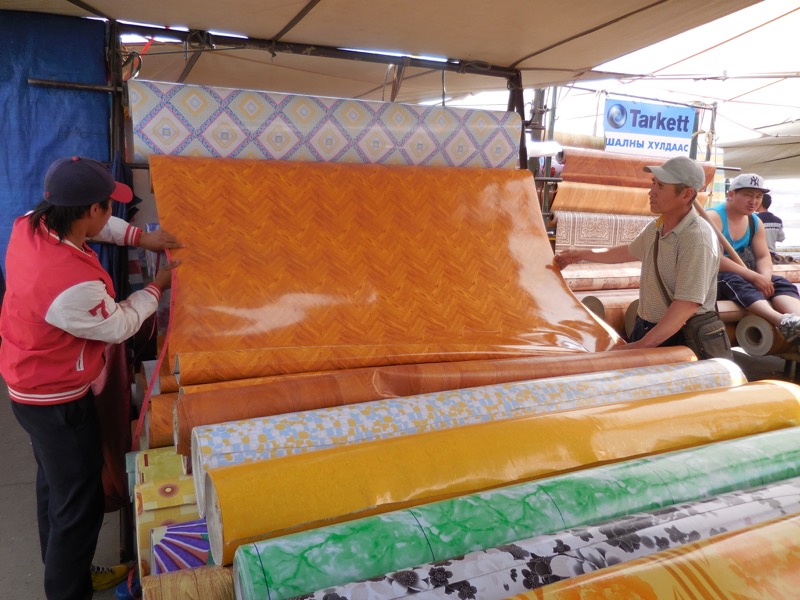 Vinyl flooring. The ubiquitous choice these days. I’ve only been in a couple of gers ever that had the old school felt rugs on the floor. I found that the sheet vinyl comes in different thicknesses. We got the thickest. 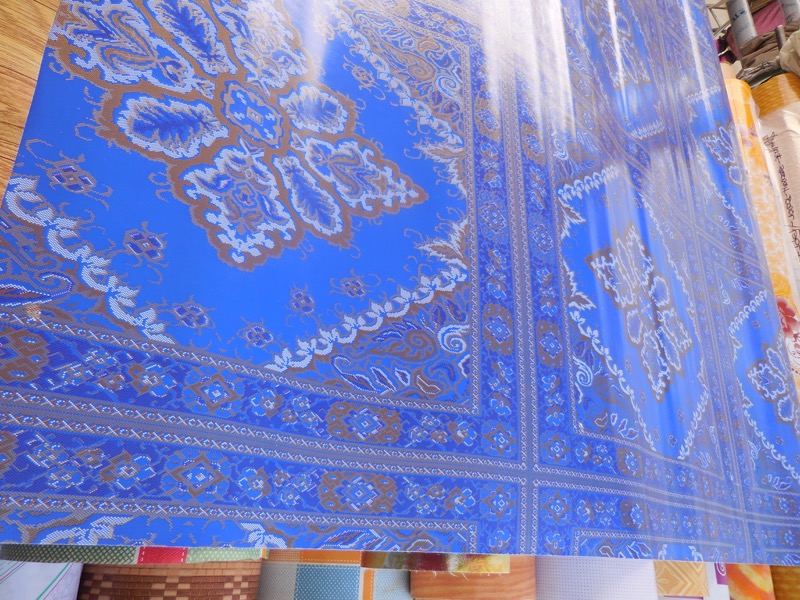 My first choice. I thought the rug pattern was cool, I liked the color and it was different than the very common fake wood floor pattern. But I let myself be talked out of it because Shuka and Amgaa said that it would be too dark. And I think they were right. The lighter, less complex pattern of the fake wood pattern one I chose worked well.

Miscellaneous purchases. There were lots of small items to get like a wastebasket, a doormat, steel basins and, in the red and white striped bag a fabulous tea kettle that was only 18,000 tugrik, about $9.00 USD. You’ll see it next week. Also a kitchen knife, flatware, cutting board, dishwashing supplies…

Cookstove. I left the choice of which one to my helpers. Shavka really went over them before deciding. I knew I wasn’t going to use the wood/dung/coal burning stove and had seen these in a few gers. It worked out great. The fuel comes in what look like spray paint cans. Simple to pop in and out of the receptacle. In the ger I set it up on the stove. 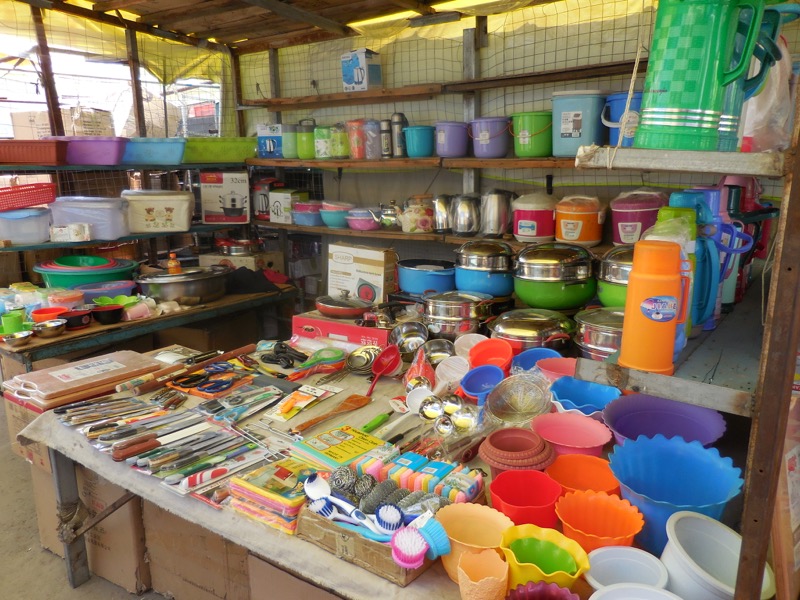 Housewares. Typical of the “mini-shops” one finds at the market. I got a couple of thermos’ (which turned out to be too big at two and three liters; will get a couple one liters for next year), four tea bowls and two larger bowls for morning cereal and soups.

Candles and propane cans. No solar panel yet, so candles for light if needed. A candlielit ger is very comfy. Also lots of matches. The cans are for the one burner cooktops. In a week I went through one, plus a little of a second, heating water multiple times a day for coffee, washing up, a batch of bansh (small meat dumplings) soup, etc.

Delivering the furniture to the truck. There were a number of trips back and forth. Once we’d finished all the shopping, we went back to the furniture seller, who had my choices ready to go on the hand truck, along with the sink stand. We’d also carried the small items to it a couple of times.

Felt pad for the bed. I had a choice between a mattress and a felt pad. The mattresses have very stiff springs and thin covers with no padding. I always have my Thermarest pad with me, so opted for the more traditional felt pad covered in cloth. I got a big one that could be folded in half on the single size bed.

Buying the stove. Last stop was back to the stove merchant to make the final choice. The purchase price included the stove, stovepipe, stovepipe metal piece for the toono and a typical fuel box. 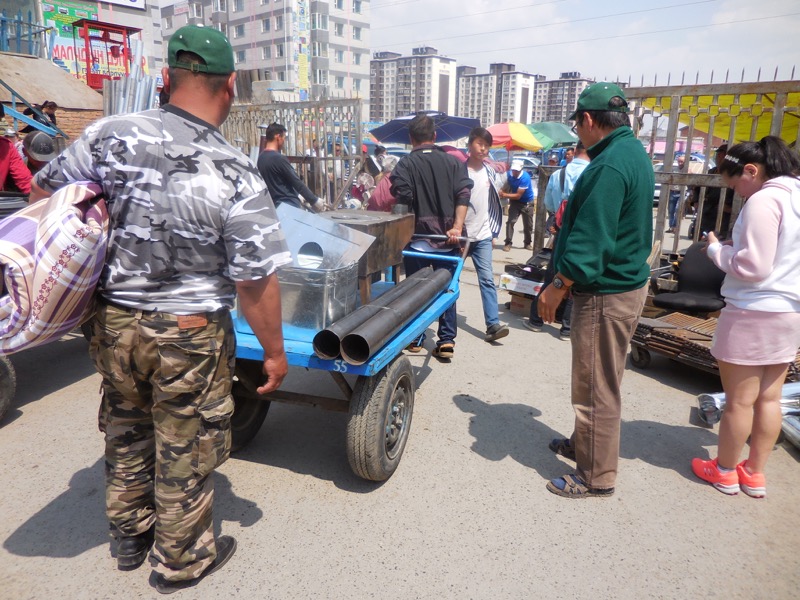 Last load. You can see the stovepipe roof piece and the fuel box in front of Shavka. Once this delivery to the truck was done, Shavka re-packed everything for the drive to Ikh Nart, about five and a half hours. I went by train that evening. 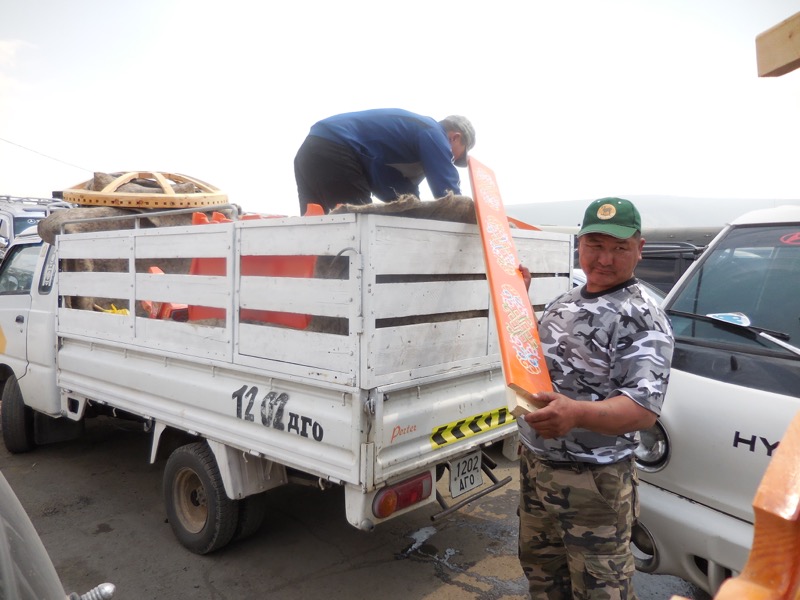 Loading the truck. Although this was taken earlier when the furniture was being loaded (that’s the front of my bed in Shavka’s hands), it shows how the ger was loaded. Traditionally, the toono is ALWAYS on the top. This past trip I actually saw a couple of vehicles in which the toono was laying on its side against the side support. I was happy that mine was going to be carried correctly.

So, how did I do on the budget? The ger cost 1.5 million tugrik…$750 USD. We were moving fast so I didn’t write down what everything else cost. All of it together came to $1200, pretty much what I’d estimated. I also paid Shavka’s gas and road fees and something for his helper and that took care of the rest.

Next week: Putting up my ger at Ikh Nartiin Chuluu Nature Reserve.