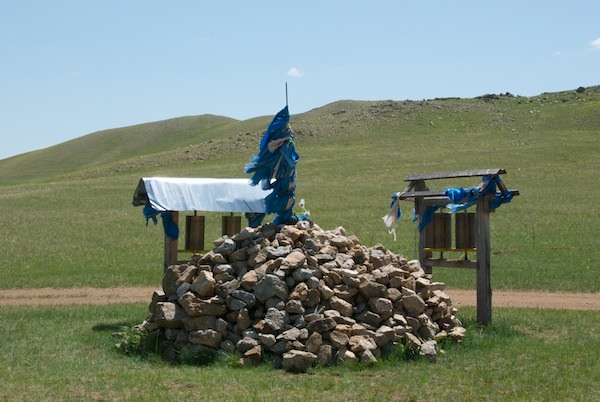 We left Gun-Galuut Nature Reserve after breakfast and drove northeast into the Han Hentii Mountains. It was good to get off the tarmac and onto earth roads again. 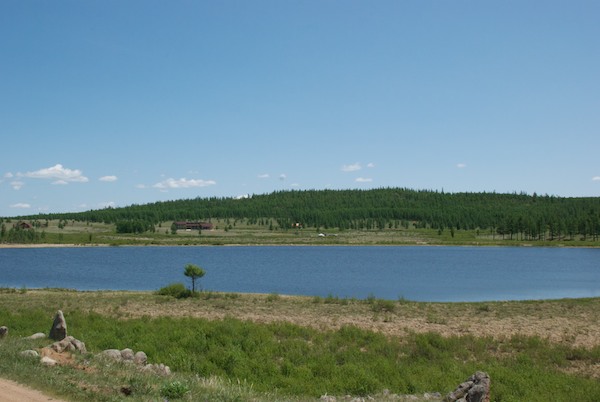 We stopped for lunch at Khokh Nuur, a VERY important historical site since it’s where Temujin called the khural (council or meeting) that declared him Chinggis Khan, leader of all the Mongols.

Sometimes the roads were more water than earth. Summer is the rainy season in Mongolia and it had been raining a lot just about everywhere in the country, so a great year for the herders and their animals since it meant lots of good grass. 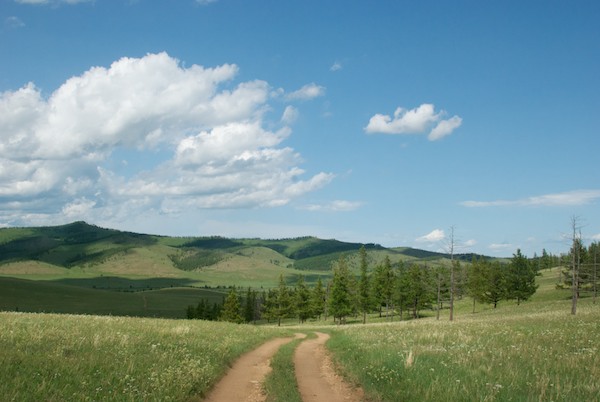 It was a glorious drive deep into the Mongolian countryside on a perfect summer day.

Since it had been raining a lot there were streams to ford.

We camped by this lovely lake the driver of my Land Cruiser, Erdenebat, knew about.

All set up and relaxing in camp. 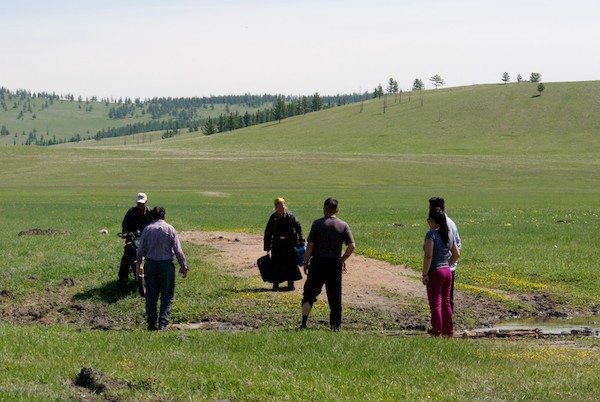 The next day at one small crossing, which was more mud than water, a man and woman on a motorbike came along right after us. They were kind of stuck because she could have gotten very dirty or injured if the motorbike fell over in the mud and it was too wide to safely step across. 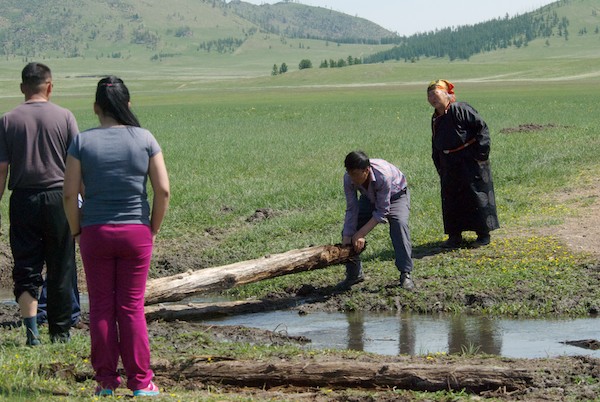 One of our drivers, Puugii, solved the problem.

A helping hand and she made it across just fine.

More scenery. I’d never been to the Han Hentii Mountains before and now I understood why they are such a popular destination for the Mongols. So beautiful.

One of the drivers got a little to close to this yak and had to run for it. The other drivers loved it. 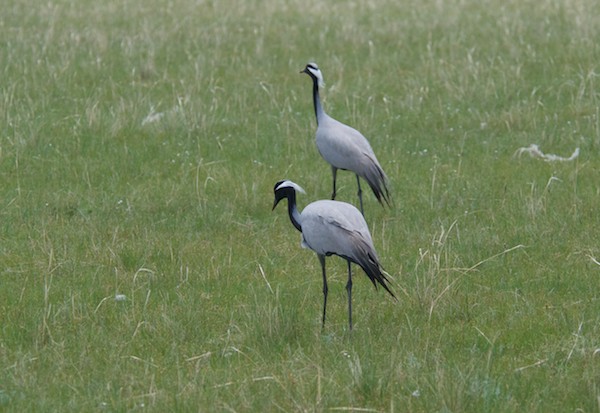 We stopped for lunch and almost immediately spotted this pair of demoiselle cranes! 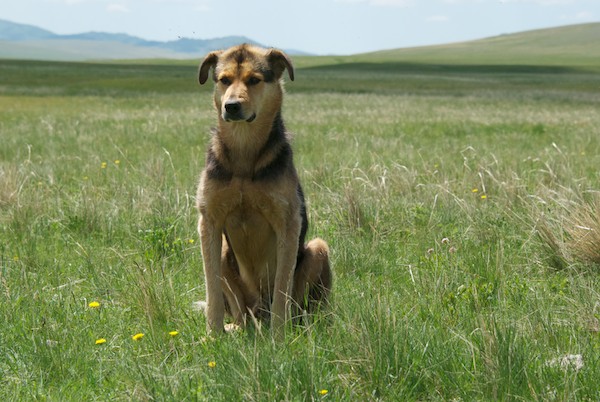 Local dogs often show up out of apparently nowhere when one stops to eat. They wait patiently until you leave, most of the time. They often seem friendly, but have not been vaccinated against rabies and are not used to being petted or touched, so it’s best to keep one’s distance.

As we drove on, we saw this large flock of demoiselle cranes. 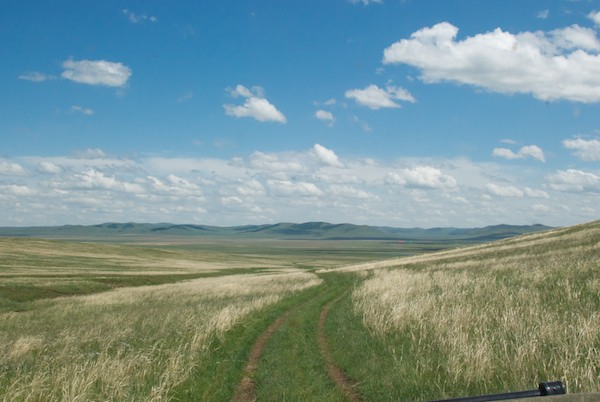 We were heading towards the site of a major new crane study. My driver, Erdenebat, had directions, but couldn’t follow them because the valley floor was too wet from the rains. So he picked his way along the mountain slopes, using a compass to keep our heading correct. It was quite a feat of navigation that I didn’t appreciate until he explained to me what he had been doing and why.

Along the way we saw this pair of endangered white-napped cranes. 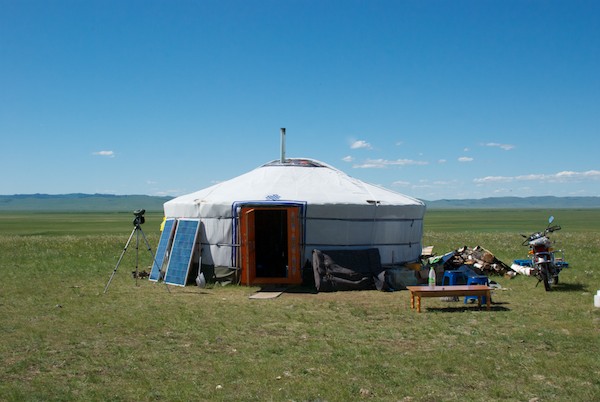 The crane research station is new, so there is only one ger so far. From this vantage point they can scan the surrounding countryside for miles for up to six species of cranes. 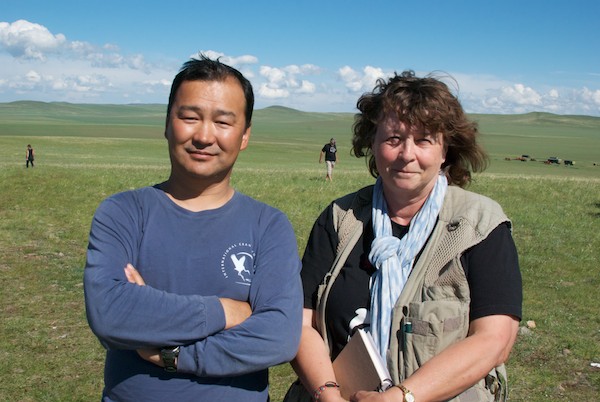 The research project is a collaboration between Mongol, Russian and Chinese scientists. The Mongol scientist in charge is Nyambayar Batbayar who took the time to give us a great briefing and answer all our questions. He is also the Director of his own NGO, the Wildlife Science and Conservation Center of Mongolia. 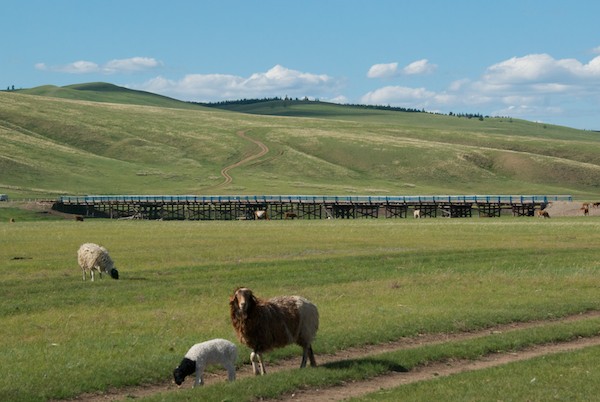 We left the research station and headed towards our next destination, Binder, crossing this old-fashioned timber bridge.

It’s a bit of an adrenaline rush to drive out onto these bridges if you’re not used to them.

Binder Nuur (Binder Lake), which was a short distance from the soum center town of Binder. We camped on the lakeshore.

We immediately saw many white shapes, which proved to be over 60 whooper swans.

We came to Binder for the first-ever International Crane Festival. And that will be the subject of my next post.