If everything goes as planned, I will soon be in Ulaanbaatar, Mongolia. Four days in town and then off to Ikh Nartiin Chuluu Nature Reserve for eleven days. I’ll post when I can. In the meantime, here’s a few photos of favorite camping spots from past trips.

I’m almost packed, just the roll-on to finish, mostly the camera equipment. I’ve developed a packing list over the years that definitely reduces the stress, plus most basics are now available in UB if needed.

I did make a final purchase. Everyone is different in what little things make travel more comfortable. For me, it’s sleeping on the same surface every night (Thermarest pad), having a real pillow ( a cut down bed pillow that fits in the roll-on), a hot coffee-like drink first thing in the morning (coffee packets, ceramic mug and immersion heater) and, this time, two decent sized travel towels. 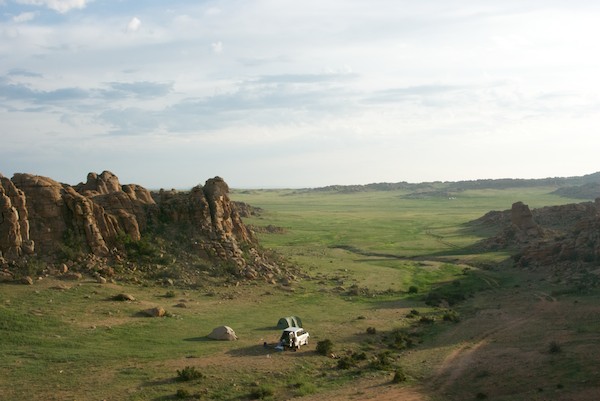 I’ve used a pair of ok cloth ones for at least six years. They were some of the first travel towels on the market, at least at REI, and worked ok. They dried fast and rolled up pretty small. But they developed a kind of “chalky” feel and weren’t big enough to really wrap up my wet hair. One last trip to the local outdoor store and I now have two 20×40″ microfiber towels from Sea To Summit. Even though they are bigger, they roll up smaller than the old ones. Not cheap, but after bumping up against the limitations of the others, I finally decided the heck with it and got something better. A test at home was successful, so it looks like I’m set.

Camping on the steppe, August 2011; beautiful, quiet and classically Mongolian