Writers of fiction say that they will have a story all plotted out, but sometimes the characters take control and things go off in unexpected directions. That’s more or less what I feel happened with the painting below. I wanted to do a big argali, because, well, I just needed to do it. About halfway through, though, I could see it starting to diverge from where I thought it was going. By the time I had the background mostly done and had started on the rocks and ground, it had become clear that the painting was going to be what it wanted to be and I was along for the ride. Interesting sensation. Without further ado, “Gun-Galuut Argali”:

I’ve gotten in a couple more good sessions on the big argali painting.  The right side background still needed something, so I went back to my reference and found some rocky slope images that I liked. So far this one is behaving itself, but you never know. 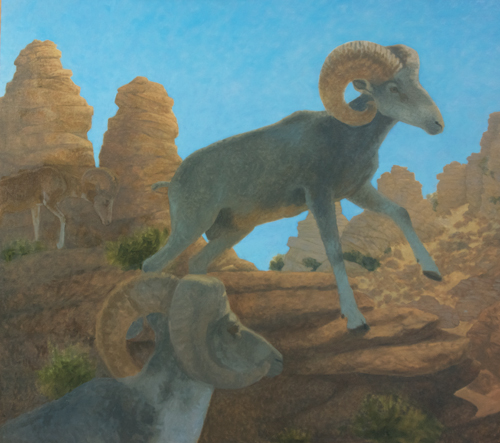 This one shows how I start to block in the light side and some of the dark areas. The drawing is still kind of lost, but I’m not worried about that at the moment. I’m working on shapes and value/temperature relationships.

Here’s the studio set-up with my iMac on the left. And, yes, I love my Hughes easel, especially when I’m working on a larger painting since I work my way over most of it during a session.