A Special Visit to the American Museum of Natural History

I was one of a large group of artists in attendance this past weekend at the opening of the Artists for Conservation juried show “The Art of Conservation”, which is at the Hiram Blauvelt Art Museum in Oradell, New Jersey. There were two full days of activities planned for us and we made the most of them.

Considering my lifelong interest in animals and nature, I’m almost embarrassed to admit that while I have been to New York a few times, until this past Friday I had never been to the American Museum of Natural History (AMNH). On the other hand, the amazing tour we were taken on by Stephen C. Quinn, Senior Project Manager in the Exhibition Department, who is also a member of Artists for Conservation, along with being on the Executive Board of the Society of Animal Artists, more than made up for it. (We also had a day at the Bronx Zoo, courtesy of the Wildlife Conservation Society, but you’ll have to wait for the paintings to see what I found there.)

(Animal artists take note:) Nothing in them is generic. The background settings are all real places. Museum artists were sent out into the field and did wonderful studies en plein air. The animals themselves are all individuals, which lifts them far beyond any other taxidermy animals I’ve ever seen. Each specimen was carefully measured in the field and that data was used to create exact forms on which the skins were mounted. Attention was paid to each muscle so that it accurately reflects whether it was tensed or relaxed. These are the only mounts that I feel that I could confidently draw from and know that they are accurate. 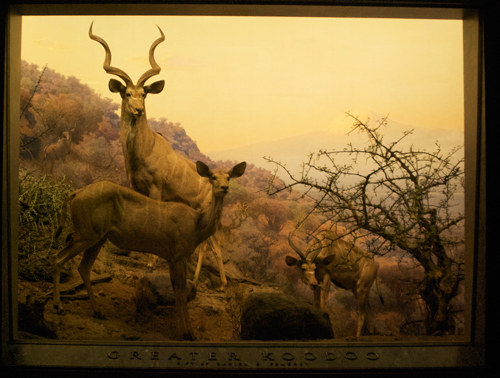 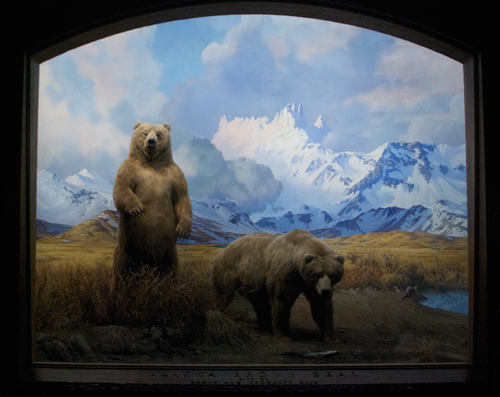 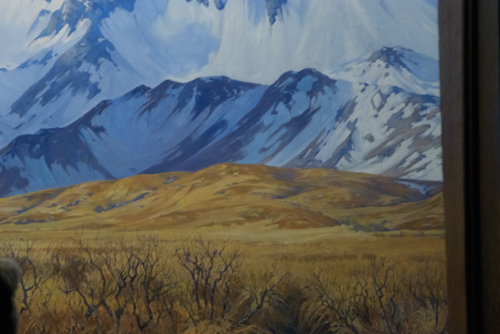 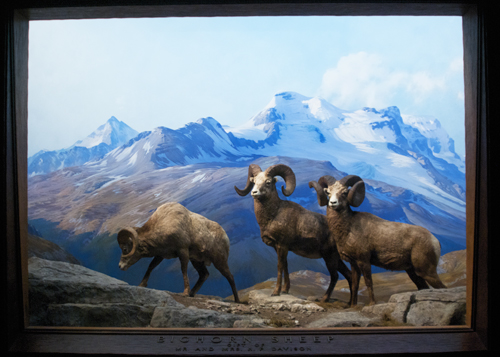 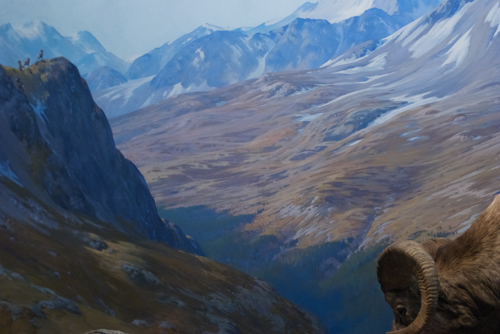 Bighorn sheep, background detail from around the curve on the left

Background; I forgot to photograph the rest of it

The backgrounds are like little master classes in landscape painting. Absolutely stunning. The above images just hit the highlights of some of the details that caught my eye.

As it turns out, a very special exhibition on the Silk Road, “Traveling the Silk Road: Pathway to the Modern World”,  opens on November 14 and Stephen took us behind the scenes into the studios and workshops where all the preparations are being done. We also got to see the space where it will all be installed Real Soon Now. A major feature is a partial reconstruction of the sunken dhow (a type of Middle Eastern ship which is “sewn” together, not nailed) that was recently featured in National Geographic magazine. It was found packed with thousands of bowls and other merchandise being exported from China to the Middle East. Until it sank.

The dhow section under construction with four of the pottery jars. A mold was taken from one of the real ones. 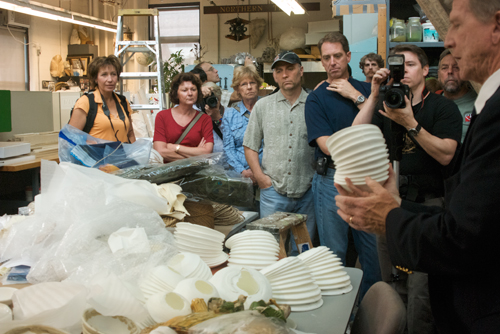 Some of the bowls, ready to be painted

Stephen tells us about how the bactrian camels are being made

A board with some of the reference the artists are using 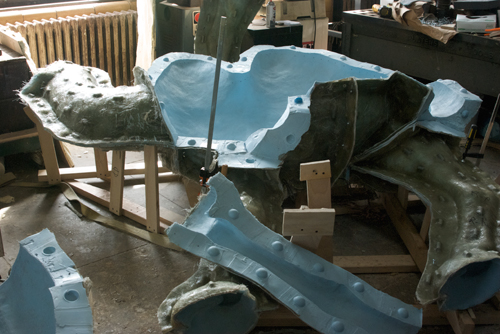 The mold for casting the camels' bodies 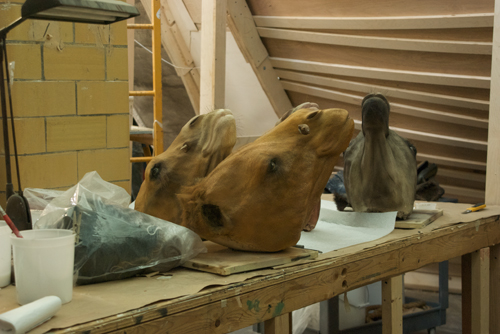 A few of the camel heads

Eventually we were turned loose to explore the museum on our own for a couple of hours. I knew exactly what I wanted to find – some of the fossils that Roy Chapman Andrews’ Central Asiatic Expeditions of the 1920s brought back from The Flaming Cliffs (which are located in the Gobi, Mongolia; you knew I’d work Mongolia into this somehow, right?). Andrews was there as part of his work for the museum, so that’s where all the goodies ended up. I visited the cliffs myself in September of 2006 and was able to sit a short distance away to watch them as the sun went down. Flame they did, as you will see below.

It took a little searching, but I found a most of an entire wall in the Ornithischian Hall dedicated to those finds, including a clutch of fossilized protoceratops eggs. The first dinosaur eggs ever found came from Andrews’ Expeditions work at The Flaming Cliffs or, as the Mongols call the area, Bayazag, which approximately means “Place of the saxaul trees”. 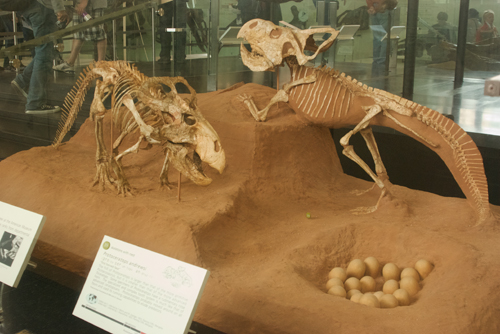 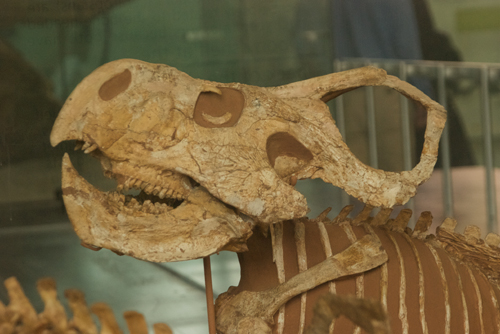 Fossil dinosaur eggs; they had one that you could touch, too!

The Flaming Cliffs with the saxaul "forest" in the background

Saxaul trees grow very, very, very slowly, so the wood is extremely dense. So dense, in fact, that if a piece of it is thrown in water it will sink. Most of the trees that I saw were ten feet high or less, so this isn’t “forest” as most Westerners think of it. And, not surprisingly, given the state of the planet, they are slowly disappearing due to being cut for fuel. Not quite endangered yet, but getting there.

Detail of the incredible color; Amusingly, the Mongols I was with found the moonrise happening behind me to be of much more interest

Lining the walls of the fossil rooms above the displays were some of the paintings that Charles R. Knight did during the time he worked at the museum. One of the first animal drawing books I got as a child was “Animal Drawing, Anatomy and Action for Artists”. I wasn’t really old enough to read it, but I copied and looked at the pictures for hours. As far as I know, it’s still available from Dover Books, but probably for more than the princely sum of $2.00 that my parents paid for it in the early 1960s. I really ought to go back and read it now. Might as well learn from the best. 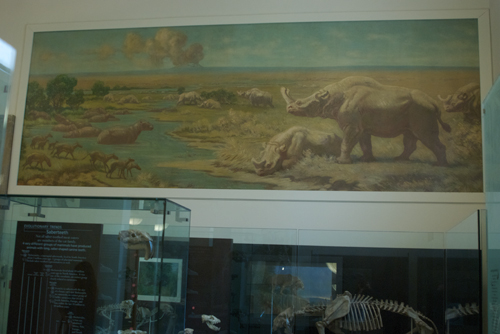 As a final bonus, there was this lovely drawing by J. B. Shackleford, who participated in the Central Asiatic Expeditions as the official photographer. His place in paleontological history is assured, as you will see from this quote from Michael Novacek’s  terrific book “Dinosaurs of the Flaming Cliffs”:

“The expedition photographer, J.B. Shackelford, hung back with the caravan of spindly-wheeled Dodge motorcars. To pass the time, Shackleford took a brief walk. Far to the north on the horizon he could see some volcanic hills that looked like islands floating in a sea of pink sands. As he walked in this direction, he saw an abrupt edge to the burnished grass, and a thin orange line beyond. He walked to the edge of the plateau. There below him extended a fantasy land of orange-red cliffs and spires. As Andrews later wrote, “Almost as though led by an invisible hand, he (Shackleford) walked straight to a small pinnacle of rock on top of which rested a white fossil bone.” This was the skull of a parrot-beaked, frill-headed dinosaur, a year later named Protoceratops andrewsi.”

I probably didn’t even manage to see half of the museum, so I have ample excuse to go back again. Which I shall.