Went to BD’s Mongolian BBQ for dinner night before last. It’s quite popular with the Mongols even though there’s nothing authentically Mongolian about it. Apparently it’s a Chinese invention. BD’s does the same kind of stir fry on a big hot surface that you see in the USA. Mongols don’t do stir fry.

Real Mongolian BBQ involves killing a goat, slitting the body cavity open, cleaning it out, stuffing it full of hot rocks, putting the whole thing in a metal container and setting that on hot coals to cook. When it’s done, the meat is pulled out, along with the rocks, which are then passed around, hand to hand, for good health. And yes, I’ve had it, hot rocks and all, and it was good.

I’ll probably go back there again since for 6900 tugrigs I can get a heaping bowl of veggies, noodles and meat with Mongolian ginger sauce. A small Chinggis Khan beer is 2100 tugrigs. 9000 tugrigs at the moment is less than $8.

Plus the cooks show off by doing things like lining up four or five pieces of broccoli on the long sword-like turner and then flipping them all up into the air and catching them all on the plate. So it’s dinner and a show.

This morning I had breakfast in the hotel, which is included in the price of the room. They’ve gone from a menu to a breakfast buffet with an egg cook, like you see at many hotels now in the states. It’s really sped up getting breakfast and one can skip the slices of mystery meat that I think they put out for the Germans.

The weather was nice and cool when I left the hotel around 9 am. I walked about twenty minutes to the Mongolian Modern Art Gallery, which is actually a museum since nothing there is for sale. There was a show that I had read about on one of the Mongolian news sites and today was the last day.

With all the Prop. 8 stuff in California and the civil rights issues concerning LGBT citizens that remain to be addressed, I wanted very much to see “Beyond the Blue Sky”, a “multi-media art exhibit for, and in collaboration with, Mongolia’s lesbian, gay, bisexual and transgendered community.

The people in the photographs have their faces covered by khadags, blue scarves, which are given as gifts, but are also used to cover the faces of the dead. It symbolizes the position LGBT people find themselves in in Mongolia since currently they cannot live their lives fully, but must conceal their gender identity or otherwise be vulnerable to prejudice, discrimination and violence.

It was a very powerful show.

Here’s the image that really struck me the most:

I then went upstairs to see the main galleries, which house original Mongolian paintings, sculpture and fine craft dating from the early/mid-20th century. As a socialist state with close ties to the Soviet Union, aspiring Mongol artists often studied art in Moscow. This gave them a grounding in classical realism that allowed them to create paintings of great quality. And they’ve built on it ever since, adding their own unique interpretations of the world they live in.

Here are some examples:

There was also this wonderful ceremonial drum with deer painted on it..

Finally, here are some views of the gallery spaces: 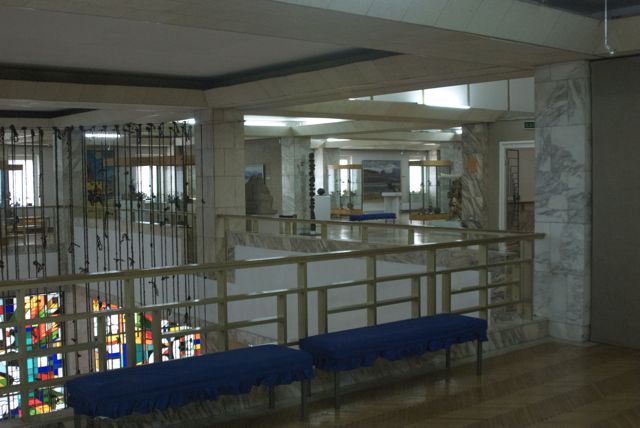 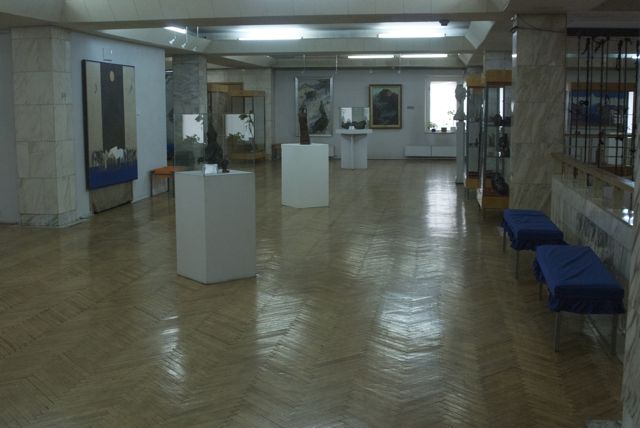 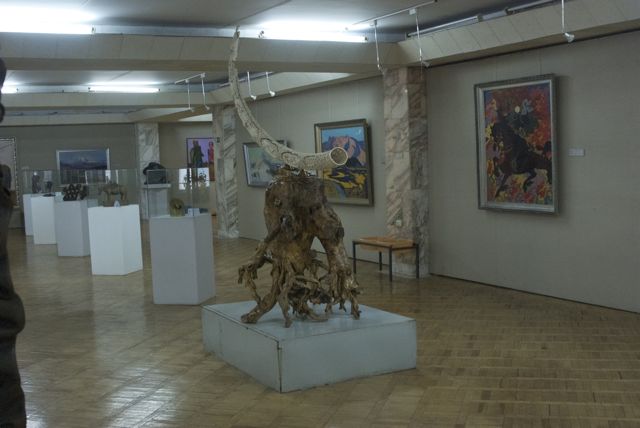 I had lunch at Millie’s, which serves good solid American food like burgers and sandwiches and is popular with the expat community of consultants and aid workers, along with visitors like me.

The next stop was the Hi Fi store, to see if I could get some of the music CDs for groups I’ve found on YouTube and Imeem. And I had some success. By the time I left, it was getting seriously hot, so I hiked it back, about 30 minutes, to the hotel to hide out until it cools down.

An addendum to my comments about all the livestock I saw when I was coming into town. Looks like it’s not as charming and picturesque to the authorities as it was to me. This is from a Mongol news website, http://www.en.news.mn:

The Metropolitan Professional Monitoring Agency has reminded herders that there is a ban on livestock entering Ulaanbaatar green areas, and another on trading of any form in certain areas. With demand for sheep rising in Ulaanbaatar just before and during Naadam, some herders come to the city with their livestock at this time and the reminders are aimed at stopping the move.

Some 200 herder families have brought 30,000 animals into prohibited areas. The law calls for confiscation of all income earned from trading in such restricted areas. Further violation of the law can lead to imprisonment.”