Travelers get attached to a particular place for a variety of reasons. Maybe it was stunningly beautiful or irresistibly peculiar. Maybe it was somewhere they’d wanted to go to since childhood, finally made it and it was everything they’d dreamed of and more. Maybe something special happened while they were there. Maybe they went for one reason and discovered something unanticipated but compelling. The latter probably most applies to why Ikh Nartiin Chuluu Nature Reserve has become one of my most favorite places on the planet.

This seems unlikely to me since I’ve never been a “desert” person. That would have been my mom, who found the area around Hemet, California (the landscape, not the trashy sprawl) quite to her taste. I like my landscapes green. With trees. Preferably redwoods. Like these at Prairie Creek Redwoods State Park, about 30 minutes from our house. I spent my childhood getting to camp out at places like this. Pretty darn lucky, I’d say.

But Mongolia got to me. Except for the northern part of the country, which is the southern edge of the boreal forest, trees are not what Mongolia is about. It’s the ultimate wide-open-spaces destination. I went to Ikh Nartiin Chuluu for an Earthwatch project and found a place so special that I plan to go back until I can’t travel anymore. I returned in 2006 for a short visit, just a couple of days. Here’s what happened the first day.

Woke up and 6:30, out the door in less than 10 minutes to walk down the valley. Too early for good light, but saw a couple of argali dash up the hill from the stream over 100 yds. away so no photos. 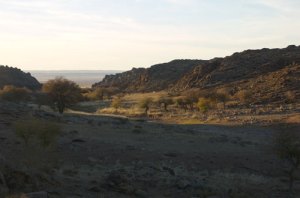 Valley where research camp is located

First sun on the rocks

Came back for 7:30 am breakfast. Baaska (my guide), driver and master’s student still asleep, so headed out on my own about 8:30 am. Found my favorite huge rock! Windy but not cold. No argali or ibex. Stopped to rest and have a snack and realized that not only was the wind getting much stronger, but that the distant rocks were getting hazy with dust, just like when I was out with Rich (Dr. Richard Reading, the Earthwatch project’s Principal Investigator, and I walked back to camp in an on-coming dust storm in 2005 after the team had walked a 4km argali survey). Decided it was time to go directly back to camp since no one knew where I was, just that I would be back at 1pm for lunch. Got out the GPS, punched “Go To” POI #1 (camp) and got back just fine.

This rock turned out, from another angle, to be three formations that were overlapping, but I still like it! It’s about the size of an aircraft carrier.

Since I’ve never been here at this time of year and there really isn’t anyone to ask until Amgaa gets here or maybe Jed (two of the other scientists), it seemed sensible to play it safe. Maybe after lunch will be a good time to go out in the van and check out the Tibetan writings and see if we can spot any argali. The Mongolians, Baaska, student, driver, ranger are all yakking away in the kitchen ger. I’ve never known people who could sit down together, never having met before and just roll along talking like the Mongolians. It feels from the outside like the continuation of an ageless oral culture which hasn’t been undermined by tv. Yet.

I hope this wind dies down. Being out in Ikh Nart again, just me and the rocks was really great.

5:15 pm- Went out in our van with the ranger at 1:30. He needed to do some telemetry and was willing to find inscriptions. We found five, but no luck at all finding the one Rich took me to last time. Saw and photographed a large herd of  ewes with, it looked like, one ram and a smaller group a few minutes later. It has really stayed windy and cold. I’m in the ger with the stove going. 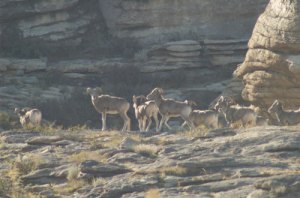