Back at the Bayangol Hotel this afternoon. I’m sorry we didn’t get to western Mongolia, but our time at Arburd Sands was fantastic! The ger camp is owned by a local herder family and is located amongst a 20 km long stretch of sand dunes, which form a sort of northern border to the Gobi. The head of the family, Choidog, is one of the most famous and honored horse trainers in the country. His 40-something son, Batbadrach, won the national Nadaam horse race two years running when he was 8 and 9 years old. They currently have around 300 horses.

The ger camp is pretty laid back. Activity options include trekking around the dunes and surrounding countryside, horse riding and camel rides. David and I opted for a one hour horse ride the first day (and a camel ride the second). I asked about the Mongolian saddles and it turned out that they had a modified one for me to use. It didn’t have the big silver studs on the sides of the seat, but did have a thin felt pad. Otherwise it was basically the same saddle the Mongols have used since the time of Chinggis Khan. And it wasn’t uncomfortable at all for just a hour, even given that I have hardly ever ridden a horse. So, here’s David and I, ready to ride. It was great! 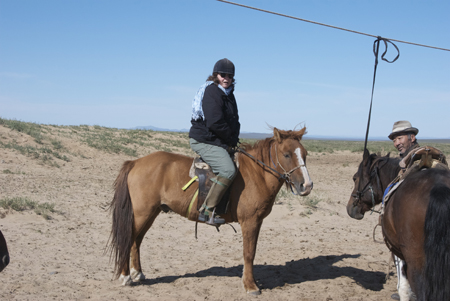 Me on Mongolian horse

My horse, who has no name except maybe “Brown Horse”, and I did quite well. He was willing to trot and was easy to “steer”. I had sat on horses while they moved a few times in the past. This was the first time I ever felt that I was really riding. I was able to stand in the saddle a few times to see what it felt like since the Mongolians ride that way from childhood. They must have thighs of steel. The stirrups are tied together under the horse’s belly, which does make standing quite a bit easier than it would be otherwise.

The herd of bactrian camels, which belong to other local families and our camp hosts Batbadrach and his wife Desmaa, numbers around 30. Some are trained for riding. Others pull carts loaded with camping gear. All but one of the riding camels were out on a trek with other visitors, but we got to take turns riding him. It was just as much fun as in 2006. Photo by David.

The herd tended to be around camp in the morning and late afternoon, so I got lots of pictures of them in great light. Here’s one:

Yesterday morning, we were asked if we would like to go to an annual family event, the branding of the year’s foals. Of course we said yes, but not knowing what to expect. What we got was one of the reasons why travel is so worth the time, money and intermittent hassle- being present at something that was not a set-up for tourists, but getting to share part of a Mongolian country family’s way of life that has continued without interruption for over a thousand years. I was able to record it all and have some of the best photos I have ever taken. Here’s a few highlights:

Foals lined up for branding 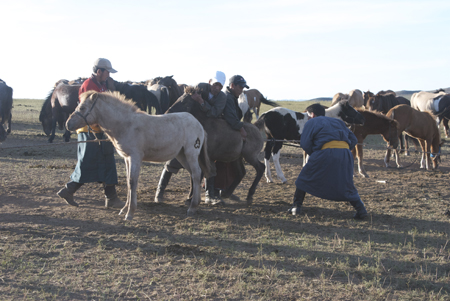 Airag and vodka ready to imbibe

I had asked to take the women’s picture at the after-branding party and Choidog got up from his spot on the floor and joined them, putting on his hat, which was presented to him by the president of Mongolia and has a silver horse on the top. I looked through the viewfinder and it was a total National Geographic moment. Even now, looking at it on this post, I can hardly believe that I was so fortunate to have taken this picture. I’ll be sending copies to all of them. Sodnam is Choidog’s sister, Lhamsuren is Batbadrach’s mother and Surenjav is the mother of one of Batbadrach’s friends and also his brother’s mother-in-law. It’s a big family. Desmaa couldn’t tell us how many grandchildren Choidog has.

Choidog's favorite place, on his horse

To conclude- at the ger camp for the first night was a Swedish travel writer named Steven. We all sat together for dinner and had a great time exchanging stories. He had come to Mongolia by way of the Trans-Siberian Railway. The next day he was asked if he was going to come back to Mongolia. He said yes in a very strong, definite way. I asked how long he had been here. He replied “Four days”. Yup, he’s got it bad, just like me.