Art and Kittens, How Can I Lose?

ART THOUGHT FOR THE DAY:

I have spent most of my professional life for the last ten years trying to gain some competence in the craft of oil painting. Although some artists proudly describe themselves as “self-taught”, I’m not one of them except in the sense that, in the end, we all have to figure out for ourselves what marks to make on the canvas (or other support) and how and with what to make them in order to express our vision. I’ve found that good instruction is a great timesaver, so I’ve tried to learn from those who have gone before me, either as a student in art school or workshops or by gathering a small collection of “how to do it” or “how I do it” books to learn from past and present masters. It’s those books that I plan to “draw” on in order to share some of what I have found useful, valuable and thought-provoking over the years.

So, we will begin with a quote from Robert Henri’s (pronounced Hen-rye) The Art Spirit:

“Technique must be solid, positive, but elastic, must not fall into formula, must adapt itself to the idea. And for each new idea there must be new invention special to the expression of that idea and no other. And the idea must be valuable, worth the effort of expression, must come from the artist’s understanding of life and be a thing he greatly desires to say.”

(Note: many of these quotes date from a time when women were barely tolerated in the fine arts, so the male pronoun dominates; however, that does not invalidate the content)

These three came into the shelter on June 4 and weren’t in very good shape, either health-wise or willingness to be handled by people. In fact, they started out labeled “feral and fearful”. Shelter staff was able to get them to the point where they could be picked up and petted. I brought them home a week ago on the 17th and will have them until they weigh 2 pounds plus a few ounces, which is the minimum for neutering. They were at around 1 pound, 3 oz,, their coats were dry and I could feel their rib cages since they had no fat. I could feel the vertebrae on the littlest one, who was visibly weaker than his two sisters.

It is one week later and they are much improved, thanks to room to play and high-octane wet food everyday. Coats are soft and tummies filling out. They come running, demanding to be petted now and like tummy rubs. They also have names (fosters get to name their charges); Raven, Kestrel and Merlin. So, here they are at age seven weeks or so: 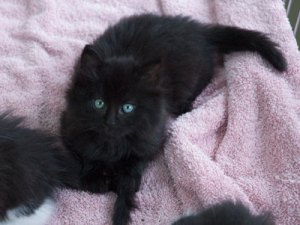 Kestrel, who has vocal opinions about almost everything:

And Merlin, quieter so far, but he was the weakest of the three when he arrived