I was coming to the end of my first tent camping trip in Mongolia in July of 2010. We had traveled south to a remote Gobi lake, Orog Nuur…myself, my driver/guide and a cook… and back north into the Hangai Mountains to see a variety of sights, including […]

On June 13, as planned, we attended the first International Crane Festival, which was held in the soum center of Binder, Han Hentii Aimag. It was a wonderful day and great to be able to, by our attendance, support the local community and the researchers. The first thing […]

The WildArt Mongolia Expedition 2014 Has Returned!

We returned to Ulaanbaatar on June 21 and I immediately had to throw myself into preparations for the 2013 Expedition group art exhibition, which will be the subject of my next post and is open now at the Union of Mongolian Artists Gallery until July 7. The 2014 […] 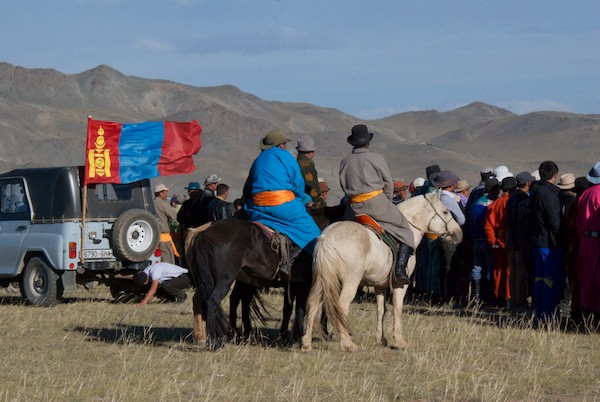 We finally came full circle, in a way, and arrived back to Bayanhongor, from where we had turned south towards the Gobi over two weeks earlier. As we came into town we saw a big crowd and…horses. What was going on? We drove over to the parking area, […]

You can read Part 1 here. The Expedition schedule was planned to coincide with the naadam (festival) that is held at Arburd Sands ger camp every year to celebrate the camp’s anniversary. Since we were going out to a part of Mongolia, the far western Gobi, where there […]

The day was cloudy and cool, really rather nice. It could have been 90F in the shade. We left for the horse race site and spent two hours in traffic that was almost indescribable. A cross between Mr. Toad’s Wild Ride, bumper cars without anyone actually making contact […]