Continuing on with our series, I’ve always thought it would be fun to do a trip that would start either in the north or south and travel through all six major ecosystems in Mongolia, which run roughly parallel to each other in bands going from east to west.

Here is a map that shows them very well. It’s from a booklet, “Mongolia’s Wild Heritage: Biological diversity, protected areas and conservation in the land of Chingis Khan”, that was published in 1999. It was a cooperative effort between the Ministry of Nature and Environment, the Mongolian Academy of Sciences, the Mongolian Biodiversity Project and the Worldwide Fund for Nature. I don’t know if it’s still available, but if you are interested, drop me a note and I’ll see what I can do. 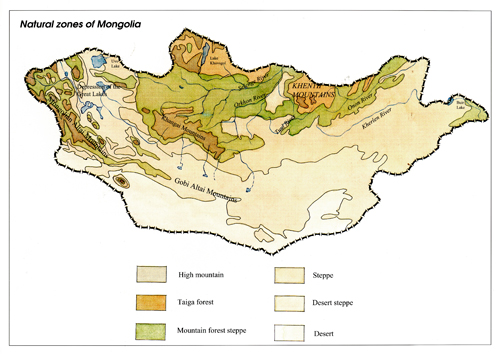 Starting in the north:

1. High Mountain– I haven’t been up into the mountains yet, but I did get the above photo of Jargalant Hairhan, which is part of the western Altai Mountains. The high mountains make up about 5% of Mongolia’s land. The climate is extreme. There are still some glaciers in the Altai Mountains. Animals that can be found there include argali, snow leopard, ibex, Altai snowcock and two species of ptarmigan. The photo was taken during my 2006 trip to Khomiin Tal on our way back to Hovd. 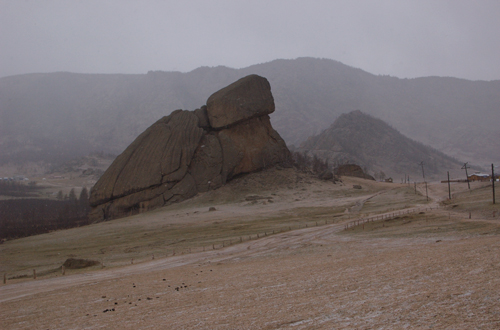 2. Taiga– the southermost part of the vast world-circling boreal forest, or taiga, extends into northern Mongolia.  It covers about 5% of Mongolia’s land area. The weather is also extreme with more rain and lower temperatures than most of the country. The most common species of tree is Siberian larch. Animal species include reindeer, wolves, wolverine, lynx, Eurasian river otters, stone capercaillie and three species of owl. This is the famous Turtle Rock, which I photographed in Gorki-Terelj National Park in May of 2005. It was snowing. 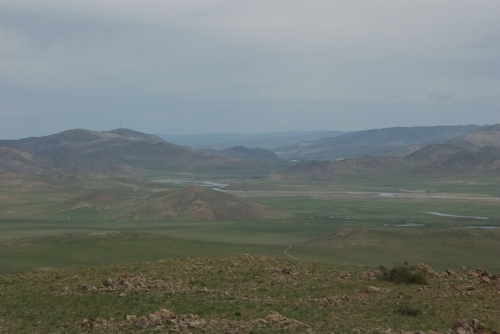 3. Mountain Forest Steppe- As the name indicates, this is a transition zone between the mountain forests and the grasslands of the steppes. It accounts for about 25% of the country’s land area. The mountains are of a lower elevation and include wide river valleys. Most of the population of Mongolia lives in this zone. Animal species include roe deer, elk (marel), wolf, red fox, Eurasian badger, Pallas’ cat, wild boar, great bustard, black kite and darian partridge. The image above was taken from Mt. Baits in Gun-Galuut Nature Reserve in July of 2009, looking north into the Kherlen River valley and on to the mountains. 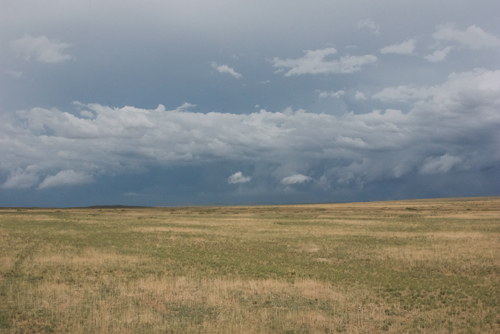 4. Steppe– This is the landscape that most foreigners envision when they think of Mongolia. The famous grasslands cover about 20% of the country. The largest remaining area in Central Asia of this ecosystem is in eastern Mongolia. The climate runs from hot in the summer to cold in the winter, but not as extreme as the zones to the north and south. It provides much of the main grazing land for the herders’ livestock. Animal species include Mongolian gazelle, wolf, corsac fox, Siberian marmot, tolai hare, demoiselle crane, steppe eagle and saker falcon. The photo was taken en route between Ulaanbaatar and a ger camp at Arburd Sands in July of 2009. 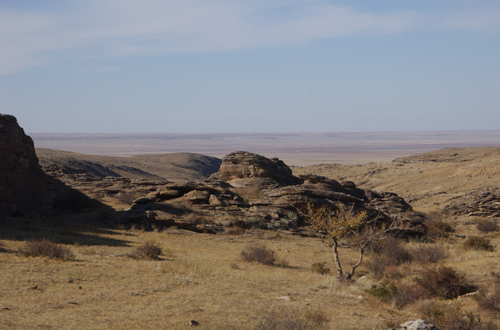 5. Desert Steppe- This is the transition zone between the grasslands and the Gobi (which means “desert” in Mongolian). It accounts for over 20% of the land area. Drought is frequent, along with strong winds and dust storms. Many herders live in this ecosystem, however. Animal species include takhi (Przewalski’s horse-reintroduced), khulan or wild ass, saiga antelope, marbled polecat, Mongolian hamster, houbara bustard, lammergeier and cinereous vulture. The image was taken at Ikh Nartiin Chuluu Nature Reserve in September of 2008. 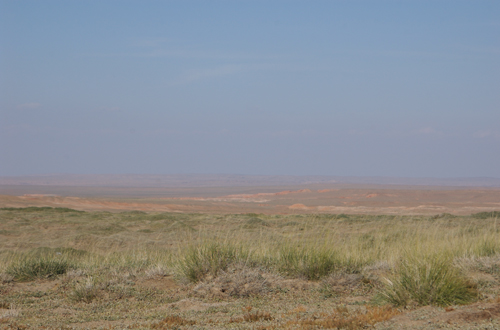 6. Desert- The Gobi is one of the most famous deserts in the world, but, contrary to common belief, very little of it is sand. It’s mostly gravel and small rock and as you can see, there is vegetation. It accounts for around 25% of the land area. Where there are springs, families have truck gardens and it is well-known that the best and sweetest vegetables in the country come from the Gobi. The weather is, once again, extreme, climbing to well over 100F in summer and dropping to -40F in the winter. Animal species include wild bactrian camel (very endangered), Gobi bear (critically endangered; maybe 30 left), khulan, saiga antelope, argali, Pallas’ sandgrouse, saxaul sparrow and desert warbler. I took this picture in September of 2006. The red rock formations in the distance are the Flaming Cliffs, where the first fossil dinosaur eggs were found.

All this, in a country that is about twice the size of Texas!

The travel season is almost upon us. I’ve got my plane tickets for my July departure to Mongolia. For anyone else thinking about or planning to go there, I thought I’d offer one list a week for six weeks, of six “themes” for things to see, with six suggestions.  I’ll start with the one that’s probably nearest and dearest to my heart – wildlife viewing destinations. I’ve been to all of them at least once.

1. For horse-lovers, Hustai National Park is a must if you are going to Mongolia. It is one of three places where tahki (Przewalski’s horse) have been reintroduced and is only about two hours west of Ulaanbaatar, mostly on tarmac road. You may also see marel (a species of elk), Mongolian gazelle, marmots and a variety of birds, such as demoiselle cranes, golden eagles, saker falcon, and black storks. There is a permanent ger camp that is open year around. The main building has a pleasant dining hall. There are three large concrete “gers”. One houses a gift shop, one has displays about the park and another is where presentations about the park are given by staff scientists. You can explore the park by vehicle, on foot or horseback. When I was last there in the fall of 2008, there were 15 harems of over 200 horses.

2. Bird-watchers should consider traveling out to western Mongolia to go to Khar Us Nuur (Black Water Lake) National Park. Khar Us Nuur is the second largest freshwater lake (15,800 sq km) in Mongolia . The Khovd river flows into it, creating a large marsh/wetland that is home to the largest remaining reed beds in Central Asia. The lake provides habitat for wild ducks, cormorants, egrets, geese, wood grouse, partridges, the rare relict gull and also the herring gull.  May and late August are the best birding times.  Another freshwater lake, Khar Nuur (Black Lake), which is connected to Khar Us Nuur via a short river called Chono Kharaikh, hosts the migratory and globally threatened dalamatian pelican. Direct access to the lakeshore is limited due to the reedbeds, but there is open shoreline near the soum center (county seat) on the north shore and an observation tower on the east side. As far as lodging, I can’t make any recommendations since I was rough camping when I was there, but I’m sure there’s something in or near Hovd, the main town. From Ulaanbaatar, flying to Hovd is the only practical way to get there since it’s about a thousand miles west of the capital.

3. The legendary Gobi is home to Gobi Gurvansaikhan National Park, created partly as a refuge for an endangered population of wild bactrian camels. They are in a remote and inaccessible (except for researchers) part of the park, however. There are also snow leopards and argali, which visitors should not expect to spot. What there is a good chance of seeing are Siberian ibex, pika, two species of gazelle, steppe eagles, golden eagles, lammergier or bearded vultures, black vultures and a variety of smaller birds. I stayed at Nomadic Journeys’ Dungenee eco-ger camp, which is taken down at the end of each season, leaving almost no trace. The kitchen and dining “room” are in connected gers. The setting is terrific, on an upland that has the park’s mountains in one direction and the Gobi stretching out in the other. To get there from Ulaanbaatar one either drives south on the main road, which is an earth road and takes, I think, two days, or flies into Dalanzadgad, which takes about two hours.

4. A relatively new park, Gun-Galuut Nature Reserve is only a couple of hours east of Ulaanbaatar, mostly on tarmac road. There are two main wildlife attractions here: around 100 argali mountain sheep, which live on Mt. Baits and a wetland area with endangered white-napped cranes, along with a variety of other birds like cinereous vultures, demoiselle cranes, black storks, whooper swans, ducks and terns. The permanent ger camp has a lodge which houses a dining hall and bathroom facilities. There are many activities to choose from besides wildlife watching, including boating, archery, yak cart and horse riding, hiking and homestays with herder families, all of which provide employment for local people. This was the first stop on my Artists for Conservation Flag Expedition in July of 2009.

5. I knew nothing about Baga Gazriin Chuluu Nature Reserve when I arranged to go there as part of my July 2009 Artists for Conservation Flag Expedition other than it had argali. I was only there for two days, but they were two of the most memorable days I’ve had in four trips to Mongolia. The reserve is home to about 60 argali, which are more tolerant of people and vehicles than the ones I’ve seen elsewhere, along with Siberian ibex, cinereous vultures, columbia rock doves and other birds.  The rocky uplands cover a smaller area than Ikh Nart (no.6 below), and are easy to get around in on foot or by vehicle. There is a ger camp tucked up against one of the rock formations with an amazing view down the valley. A concrete “ger” serves as the dining hall and has a covered patio area. There is a toilet/shower block, for which the water is heated by solar power. Baga Gazriin Chuluu is about a six hour drive on an earth road southwest of Ulaanbaatar.

6. And last, but certainly not least, Ikh Nartiin Chuluu Nature Reserve, my destination when I first went to Mongolia on an Earthwatch project in spring of 2005. Ikh Nart may be the best all-around place to see wildlife in the country. There are argali mountain sheep, Siberian ibex, corsac fox, red fox, tolai hare, cinereous vultures, golden eagles, black kites, kestrels and many other birds. Nomadic Journeys also has an eco-ger camp here, Red Rocks, and offers guided and unguided trips. It is a great place to hike. There are fabulous rock formations, some of which have Tibetan inscriptions carved on them. You will need a GPS since, while there are some dirt tracks, there are no marked trails. This was the third stop on my Artists for Conservation Flag Expedition in July of 2009. Ikh Nart is a seven hour train ride or a five to six hour drive south and slightly east, mostly on tarmac, from Ulaanbaatar.

There are more photos in other posts on this blog. Look under “Mongolia” on the blog roll at the right or do a name search.