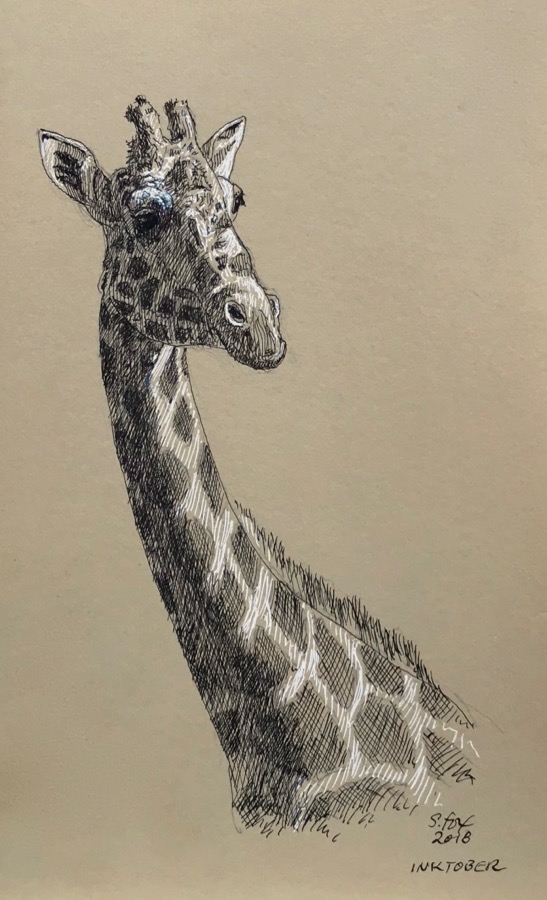 Inktober 14- “Giraffe” I really loved the curve of his neck and the light and shadow pattern in my reference photo. This is the third of the toned papers I’m trying out for Inktober, a Stillman and Birn Nova series sketchbook. I used a Gillott 303 EF nib and Perle Noire ink for the drawing. The white is mostly a Sakura Gelly Roll pen, also using a UniBall Signo for a bit of touch up.

Don’t miss out on these one-of-a-kind original drawings!

“Giraffe” It was a wonderful experience seeing giraffes in the wild on my first trip to Kenya in 1999.

Payment accepted through PayPal (within 24 hours or piece will be made available again). US shipping is included, as is sales tax when applicable.

To purchase: Leave a comment with “Sold”. I will reply and request mailing information. All work subject to prior sale.

There’s a saying, referrring to humans,  that “the eyes are the windows to the soul”. I believe this is every bit as true for animals. Now, whether or not, in the religious sense, animals literally have something that could be called a soul, is a question I’ll leave to others. But in the sense of consciousness, sentience, “isness”, I believe that absolutely. Animals experience emotions such as happiness, grief, depression, hopefulness and silliness, feel pain, form a wide variety of relationships, communicate with each other within and across species, teach and acquire wisdom and culture, use tools and, in some cases, clearly demonstrate self-awareness in the human sense. They have as much right to a safe and decent life on this planet as we do.

Whatever it is that vanishes from an animal’s eyes when it dies, before that point, there was an individual someone at home in there.

That is my starting point for drawing and painting animals. And so, in a sense, the “eyes” have it. I often do the eyes first and, not infrequently, there is my subject looking back at me. I’ve even been known to say out loud “Well, hello there.”

Here are five drawings of eyes, using the Wolff Carbon pencils on vellum bristol. I did a little something different with a simple border, an idea that I picked up from fellow student when I was in art school. It lets simple designed compositions occur instead of just having the drawing randomly trail off.

A reticulated giraffe that I photographed in the Samburu, 2004

A Holsteiner stallion, who I did a portrait commission of year before last.

A bighorn sheep ewe from the Denver Zoo. 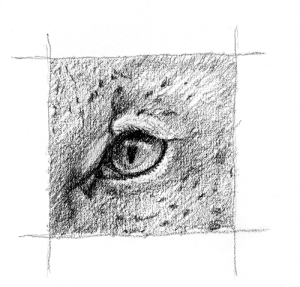 A serval, also from the Denver Zoo.

And our own dear tabby girl, Persephone, aka The Princess.

One of the things that makes me a little crazy is animal artists who present their subject in an awkward and sometimes even ugly pose. There seem to be a number of reasons for this, among them lack of drawing skill, not knowing the anatomy of the species,  getting too caught up in copying a photograph or simply not seeing the inherent grace and rhythm of living things. Just because it “looked that way in the photograph” is NO excuse. Be intentional. Don’t be lazy and settle for what’s in front of you. Now is the time to pull out the old National Geographic or hit Google Images. Not to use someone else’s images, but to fill in the information that is missing in your reference.

It is a matter of training your eye to evaluate what’s in front of you. Someone once said that drawing is seeing. Exactly right. As an example, here are two images of a cougar. Which pose do you think has the better rhythm?

The only real difference is the position of the head, but the 3/4 view really changes the flow of the top line and actually stops the sense of movement.

Here’s one of two horses I photographed in Mongolia last year. If you saw them separately as paintings on a wall, which one would draw your eye and pull you over to it?

My own eye has been influenced by looking at the work of Alphonse Mucha, the great Art Nouveau graphic artist. Notice how the hair is designed in deliberate, rhythmic shapes.

Think about how that might apply to a horse’s tail or a lion’s mane. It could save you a lot of time, and end with a far more interesting result, by seeing and painting hair and fur as larger shapes instead of individual strands. Fur rendered in excruciating hair by hair detail is definitely another of my pet peeves. There is a better way. Really.

Finally, here are some quick drawings (2 minutes or so) that I did this morning. Notice that I didn’t worry about the spots on the cheetah or the pattern of markings on the giraffe. All I wanted was to catch the gesture and rhythm of the pose. These quick sketches are also a way to find out if a pose “draws well”. Something that looks fine it a photo can look really weird in a drawing. Odd, but true. Why notice it when you’re halfway through painting all those spots?

“The true artist does not paint to please the public – but he holds the interest of all who think,  for a work of art expresses the mind of its workman. In it are clearly reflected his vices and his weaknesses, as well as his virtues. He may deceive men, perhaps, but not inspiration, which will not be duped by hypocrisy.”