The bobcat painting is done. I’ve called it “Stepping Lightly”. It will make it’s debut at Wild Visions2, the group show with five other Humboldt County artists next month. The opening reception will be August 9 from 6-9pm. More later about the show and the other artists. 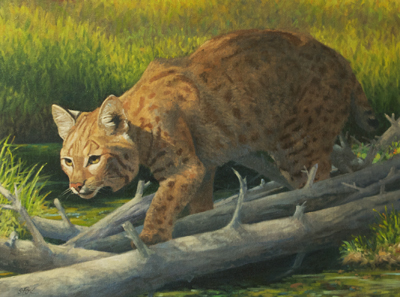 Now, a cautionary tale about reference and using captive animals as models.

I’m doing a painting that is a first for me, three panels. Here’s the reference I’m using. The animals were photographed at the Denver Zoo and the landscape is from up on Logan Pass in Glacier National Park.

Is that a great pose or what? It was morning, warm and sunny, and the ram was getting sleepier and sleepier and finally his head gently dropped onto the ewe’s back. She never even twitched. Click. Gotta paint it. But where to put them? I chose this rocky outcropping in Glacier because I liked the shapes and knew that bighorns were often seen in the area. I did a preliminary drawing of the animals with the idea of showing them on a shelf of rocks. I wanted to communicate how comfortable bighorns are in an environment that we would find “challenging”. Here’s an in-progress shot that shows my setup with my iMac. 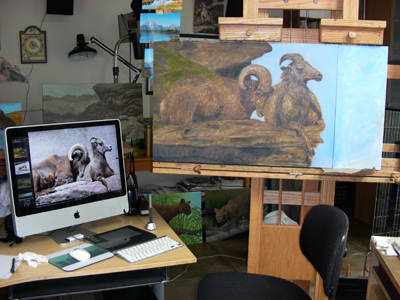 It’s great because Aperture lets me zoom in and out as needed very easily.

Another in-progress shot with the side panels propped on either side. At this point, I sent a jpeg to wildlife artist Laney, who has said nice things about my work the couple of times I have met her. She specializes in bighorns and I wanted her to eyeball the animals for drawing or any other problems. She replied very promptly and said that overall it looked good, but that the ewe’s hoof was in the wrong position compared to the rest of the leg and that the ram’s muzzle was too thin.

I went back to my reference and compared what I had with an absolutely wonderful book, Mountain Royalty, by famous Alaska artist Doug Lindstrand. As you can see from my photo, the ram in particular is shedding out, so it was a little hard to see the structure. Doug’s photos solved that problem and there was even a picture of a ram in a similiar position.

What I ultimately found was that while I had accurately drawn what was in my reference, it wasn’t “right”. The ewe’s hoof was at that funny angle, but that didn’t mean I should paint it that way, so I fixed it. When I compared my reference ram’s head with the ones in the book, I found that his head was really quite odd. Longer, thinner and with a roman nose that was much more exaggerated than the wild sheep. So I fixed his muzzle and re-proportioned his head as needed.

The other question I had for Laney was whether or not this behavior might be observed in the wild. She replied that the rams were only with the ewes in winter, so maybe I’d like to add some snow. Ah, well. In the zoo, of course, the animals are pretty much together all year around. In the wild when I shot my reference at the beginning of May, it was unlikely. Cue the snow reference. And, what I found was that it was the frosting on the cake since it brought the cool of the sky into the rock area and helped pull the whole thing together. Thanks Laney!

The moral of this story is that you can’t have too much reference, don’t assume that zoo or captive animals look the same as wild ones, do your fieldwork and learn about your subjects and finally, it is tremendously helpful to have a knowledgeable eye like Laney’s to look over what you’ve done and to it keep on track.

I finish the painting today and it goes in for framing tomorrow. I’ll post an image of it once it’s on the wall at the show.

Experience enables you to recognize a mistake when you make it again.