I’m starting a new ongoing series of posts about my personal favorite artists and why they are. Art goes back a very long way. The current oldest known work of art is 40,000 year old cave paintings of wild cattle in Borneo. Animal art! You can read more […]

I had first come to Gachan Lama Khiid on my two-week camping trip in 2010. I had never heard of it and was completely enchanted. So when the idea was floated about taking a different route back for at least part of the return to Ulaanbaatar, I thought […] 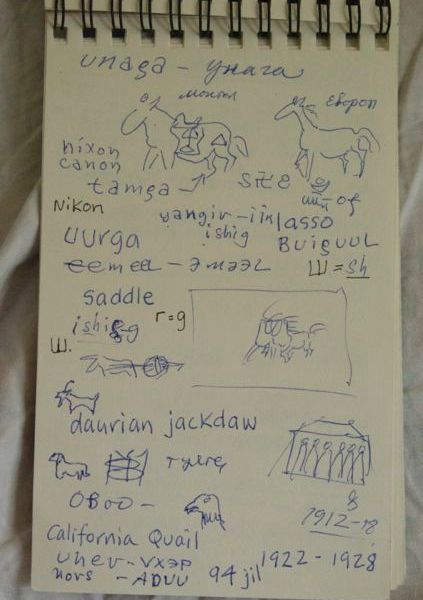 Crossing The Language Barrier In Mongolia

On August 14, Oidviin Magvandorj, one of the artists who will be going on the WildArt Mongolia Expedition, came to the National Museum to sit with me in the afternoon while my exhibition was open. He has a little English and I have a little Mongolian, but as […]

OIDOVIIN MAGVANDORJ Magvandorj was born in 1952 in Tsagaan Khairkhan, Uvs Aimag. He attended/graduated from the State Pedalogical University in 1980 From 1972 to 1976 he was an member of the Union of Mongolian Artists branch in Uvs Aimag From 1980 to 1990 he was an artist at […]

It gives me great, great pleasure to introduce the two Mongol artists who will be going on the WildArt Mongolia Expedition! I met them when I was in Ulaanbaatar last year and am very excited that they have signed on. Them are well-known in Mongolia and deserve to […]

I got an email recently from a Mongol artist asking me to introduce his website. I checked it out and found that I was more than happy to do so. And that’s not all. It seems that I had already “met” Mr. Otgonbayar through the art he created […]

I’ve known since my first trips to Mongolia that art is an extremely important part of the culture, but had not found a way to meet or connect with any of the artists themselves. Until now. Thanks to Janna, the Director of ArtiCour Gallery, who hosted my Ulaabaatar […]