I had asked to stop near the riverside and was busy taking photos of the first wild iris I had seen in Mongolia (2010 two week camping trip)…. 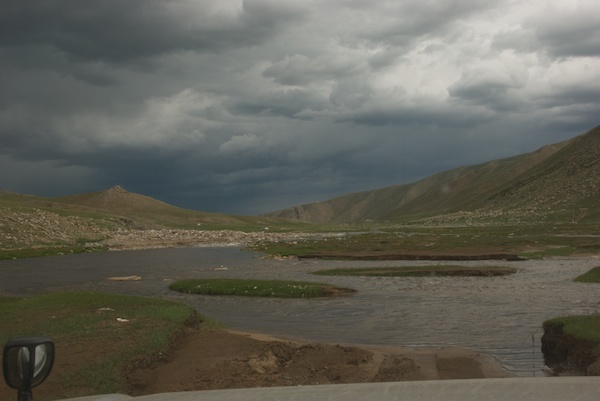 ….when my driver told me that I needed to get back in the car NOW because he was watching this. And he didn’t need The Weather Channel to tell him that the heavy rain out there in the mountains upriver from us meant that the level of the river, which we had to ford (because the bridge downstream, which was why we were on this “detour” across country, had been washed out in a previous storm) could come up very fast. Took this photo through the windshield just before we went into the water. Our destination is the tiny building you can just see against the right hand mountain in the distance. Made it across ok, but stayed in a ger camp because he thought it was too risky to camp in tents that night. And it really poured.

I was out walking the dog this morning with my husband, having observed when we left the house that it looked like it wanted to rain and, as it happened, it started to sprinkle a few moments later. It continued for a short way up the street, then stopped. He remarked that the showers were early (which had been predicted for later today).

My response was that I thought that was an inversion. Showers, and any other weather phenomena, come when they come. They are neither “late” nor “early”. That concept is a result of human-designed weather forecasting, which definitely has a margin of error and can change hourly. I made my observation by scanning the clouds, sensing what the air felt like and from having lived in Humboldt County most of my life. And I never bother with the hourly forecasts or take any particular day’s forecast as more than probabilities that one can plan around, but that are subject to change.

But it got me thinking about how detached so many people are from the “real” world. From thinking that if they’ve seen something on tv, they seen the thing itself, to animal artists who only paint captive animals thinking that they’ve seen anything truly relevant to, or reliable about, that species. (More on that in a future post)

To me, the real world is the one that would go on if humans and all their human-created stuff disappeared tomorrow. Despite the ego-driven belief of too many, our presence here is not required. It is actually a privilege that we are busily squandering.

Western Homo sapien’s collective tendency to rely on information about the world in an abstract way via human-created means and then be surprised or shocked when nature does something different bodes ill for the planet and our continued ability to live on it with any degree of comfort.

It makes me think of a possible cartoon in which someone is hunched over a computer looking at a weather report and never thinks to look out the window behind them to see the tornado bearing down on the house.

I guess this will only change when climate change is so dramatic that it simply can’t be denied anymore. But by then we’ll be, if we aren’t already, far past the tipping point and starting to learn what the saying “Mother Nature bats last” really means.