I spent a day last week at the Ornithology Department of the American Museum of Natural History (AMNH) in New York City, doing research for a painting that I have been asked to do. I’ll write more about this project as it goes along, but this was a necessary first step.

Readers of this blog know how uncompromising I am about seeing my subjects in the wild and how much doing fieldwork feeds into an animal artist’s paintings. In this case, however, no matter how much money I was willing to spend or how far I traveled, I wasn’t going to see this species in its native habitat for the simple fact that it has been extinct for almost 100 years.

The Carolina parakeet was the only member of the parrot family native to North America. Although the passenger pigeon is better known, this very colorful bird also originally was seen in enormous flocks in a range that covered most of the eastern United States from the Atlantic to Florida to Ohio and west to Kansas. They were shot for their feathers, meat and because they were considered a pest, as they liked grain fields and orchards.

And now, except for specimens in museums they’re gone, all gone. Forever.

So my only option was to do my fieldwork at one of those museums. I was going to be in New York for a Society of Animal Artists board meeting and was able to secure access to the rare and extinct bird collection at the AMNH. The room is locked and every drawer in it is locked. After all, there won’t be any more specimens collected of any of those species. I spent all day with two drawers of fifty skins, plus a number of mounts, measuring, photographing and sketching them. And marveling at how beautiful they were.

Now back at home, I’ve started to do drawings in graphite to learn what the birds look like. I will have to rely on the understanding, accuracy and competence of the taxidermists of the AMNH who prepared, preserved and mounted them. I hope to get permission at some point to post some of my photos, but for the time being what I can share is the art that I’m creating from them. 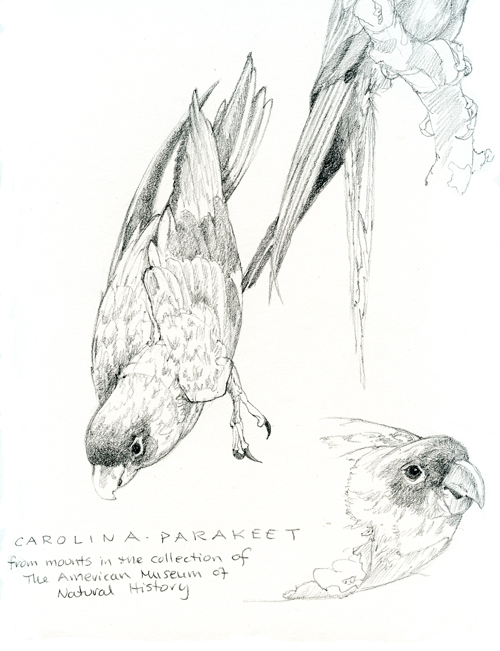 I will be working with a few colleagues who specialize in painting birds to ensure that I get their structure and body positions as correct as possible. I will also be consulting videos of a couple of similar species to see how they move and behave. This is a challenging commission, but one that I know will be very rewarding.