After leaving the falls, our route took us along and across the Orkhon Gol until we started to climb back into the mountains. 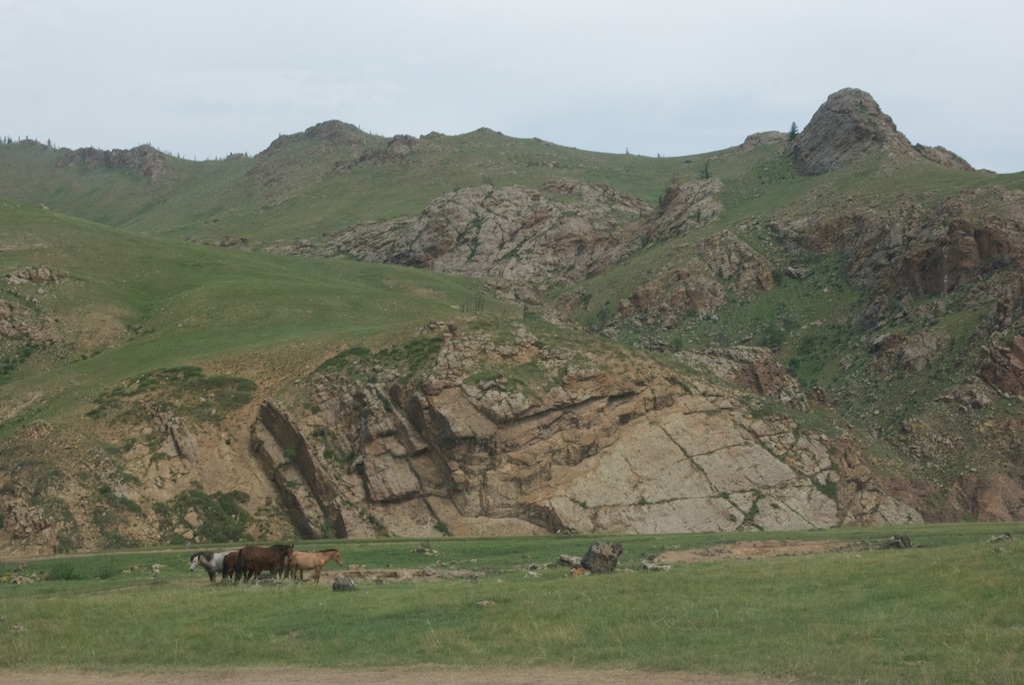 Along the Orkhon Gol

Bridge over the river

Once again, we were in wildflower heaven.

Up into the mountains once more 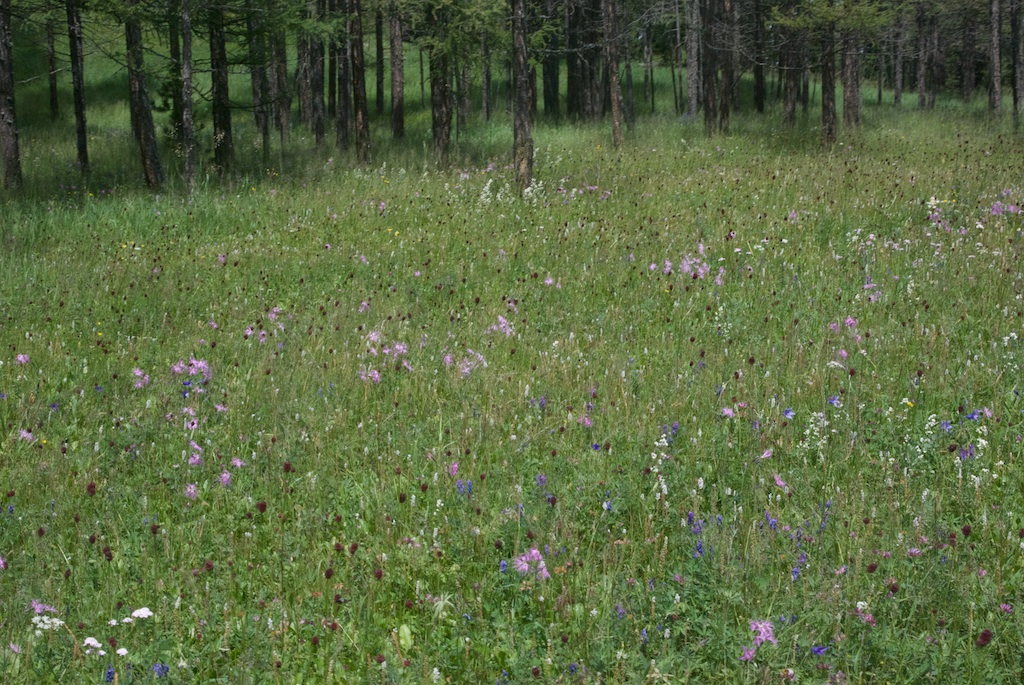 We were on our way up to Tovhon Monastery, a famous remote mountain retreat founded by Zanabazar, the first Bogd Khan of Mongolia and the greatest artist the country has produced. He is particularly known for his exquisite bronze sculptures of Buddhist incarnations and deities.

As we drove farther up, the earth road turned into a very badly rutted mud road, due to the recent rains. We came very close to getting stuck and Khatnaa backed down onto a flat area and said that we would walk the rest of the way, about a kilometer. That was fine with me since I had wanted to do at least a little hiking in the Hangai Mountains. What I hadn’t realized was how hot and humid it would be. But I just put one foot in front of the other and pretty soon these green prayer flags came into view.

Our destination proved to be worth every step and drop of sweat. In fact, it really felt like walking the last part had absolutely been the right thing to do.

We emerged out of the trees onto an open area with some gers and local guys trying to get their horses lined up for a photograph.

Local herders with horses for hire

Then it was time to make a final walk up the slope to the monastery itself.  Once we were on the grounds, the view across the mountains was breathtaking. 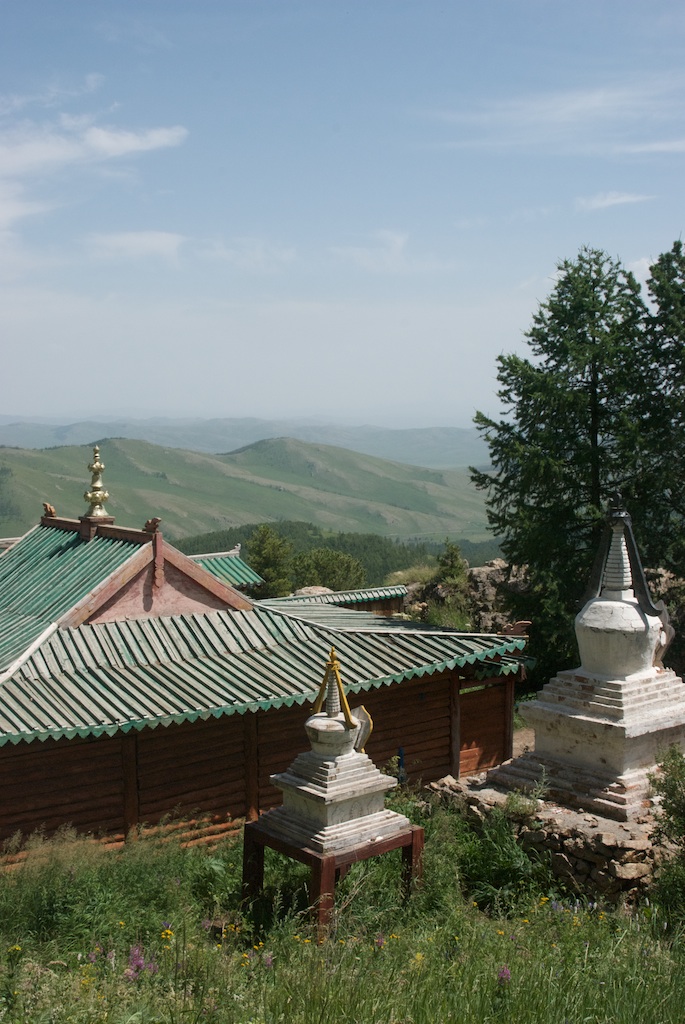 The buildings are of Tibetan/Nepalese style. Zanabazar ran afoul of the authorities more than once and this was one place where he took refuge. There are a number of small structures and stupas, but one of the main reasons people come here is to climb up the cliff that backs the monastery to pass through a “womb cave”. Doing so symbolizes death and rebirth. Men can then continue onto the top. Women are not allowed. Right or wrong, that’s simply the way it is. I was too wrung out from the hike, so I stayed below, took photos and enjoyed just sitting and being in a very special place.

In the background of the above photo, you can see people beginning the climb to the top. It was very steep, really right up the cliff face. Not anything that would be allowed in the USA.

Temple building with fence and gate

There was also a small garden. Once again, there were native plants that have been introduced into America. But what was really special were these lilies, the only time I’ve seen them in all my trips to Mongolia.] 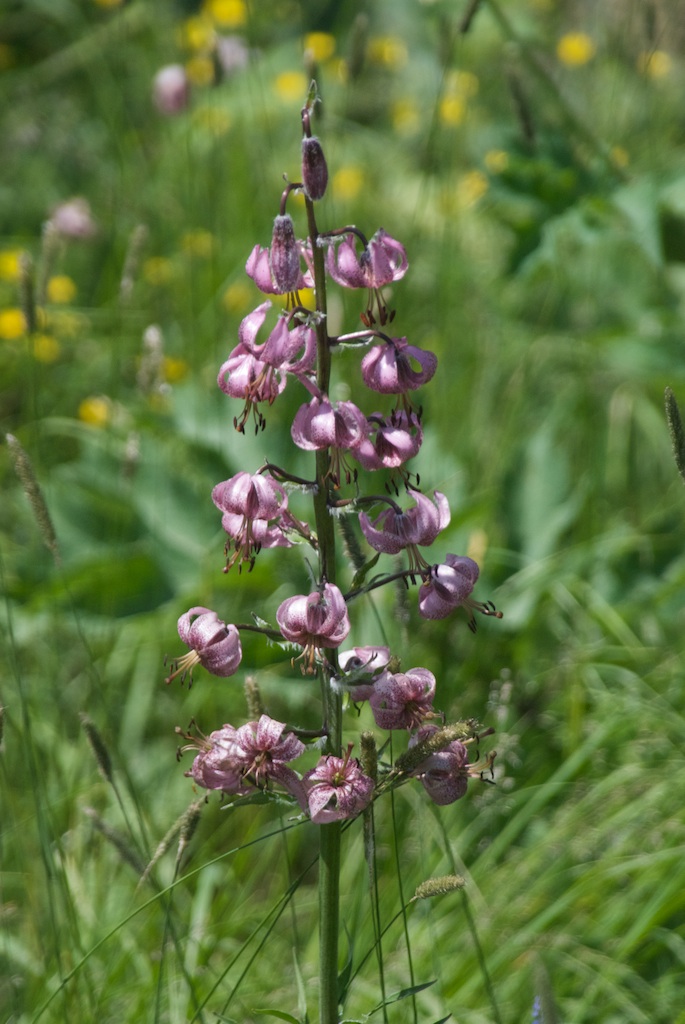 Finally it was time to take our leave and start back down. I took this last photo from down below. You can just see the top of the temple roofs.

The hike back to the car was easier, even with the ups and downs. We drove down the hill to a huge swath of wildflowers. Other tour groups had set up long tables and were having lunch. Khatnaa pulled right out into the middle of the flowers and we also had our lunch surrounded by them. 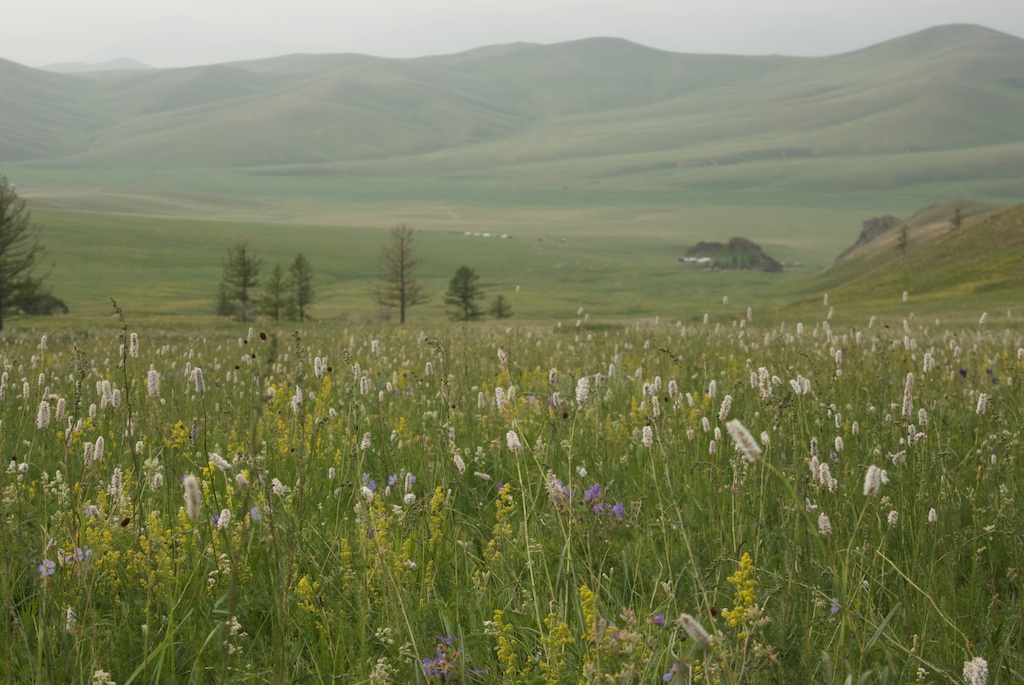 Just as we were finishing up, it started to sprinkle. Time to leave. The sun had vanished over the past hour and as we drove on, I realized that we were driving more or less straight towards some very dark and heavy clouds.

We started to see big bolts of lightning to the right and left. Then in front.  We reached an elevation where we were almost up in the clouds. Diffused flashes of bright light went off directly in front of us with almost simultaneous cracks of thunder. Then it started to rain. Hard. 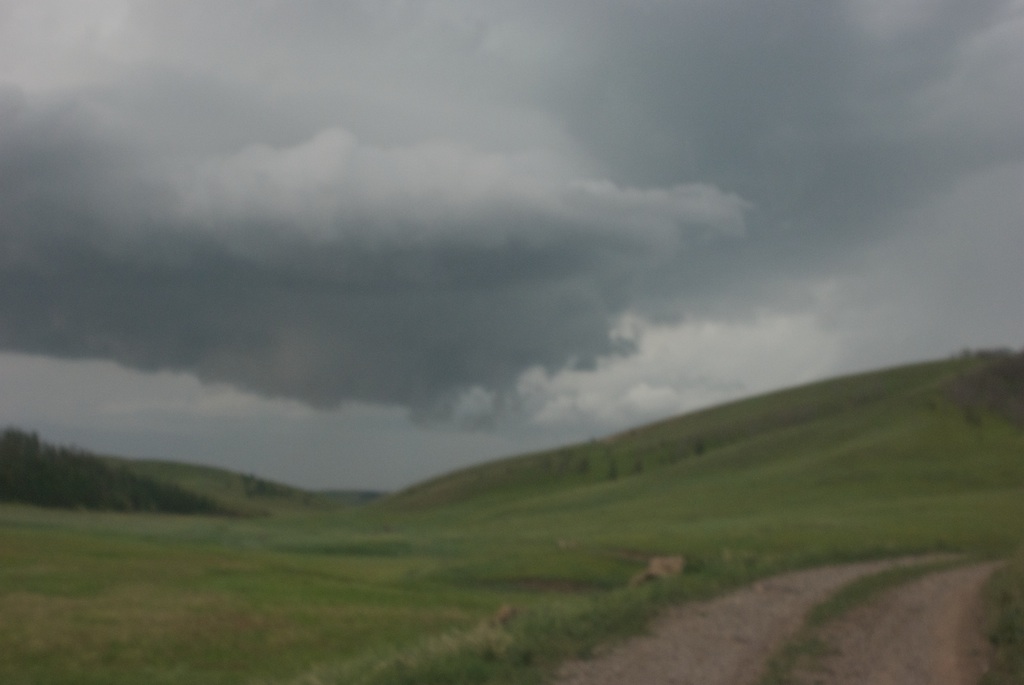 Storm clouds, but no rain yet; taken through windshield

At this point, I stopped taking pictures for awhile because I didn’t want to distract the driver. The storm had become very intense. Eventually, we came down into a high valley.

Rain in the distance; the direction we were going

A ger we made a quick stop at

And then went back up in elevation again in driving rain.

Road back up into the mountains

We reached the pass. The rain had let up enough for us to circle this ovoo.

Ovoo up on the pass 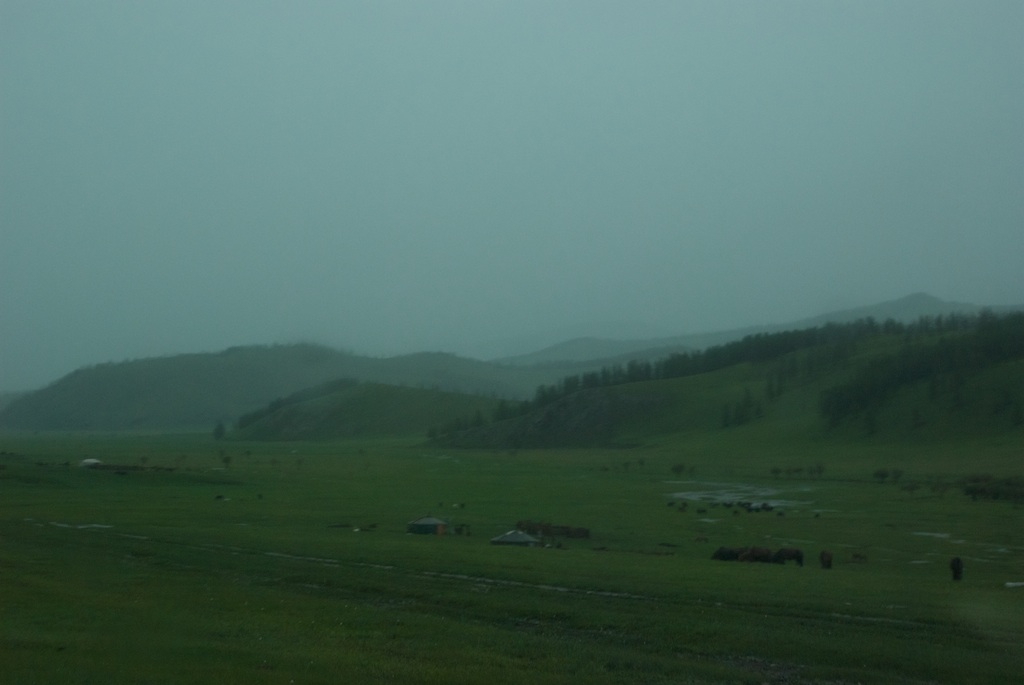 Down into another valley

Once we came down into this valley and saw all the gers and animals, I thought to myself “Whew, we’re through it.” Wrong. We were driving toward where it had been raining, so there was an increasing water build-up on the earth roads which soon turned them to mud.

Coming down out of the mountains

The road got more and more treacherous. Once again I mostly stopped taking pictures to avoid causing any distraction. To quote from my journal:

“It had been raining heavily in the direction we were going and the roads were running with water and very slick in spots. As I sat in the passenger seat, I saw how deep the Mongol bag of tricks is for driving on in what were really impossible conditions.

“The tire treads got so caked with mud at one point we lost traction completely and slid to the side of the road. Khatnaa, somehow, by turning the wheel back and forth quickly, got us facing in the right direction and then deliberately drove down a rut (see image below) at the side of the road that had water in it to clean off the treads on one side.

“He also kept the treads clear by driving on faint paths in the grass, off the road.

“We were still at high elevation and hadn’t seen a ger since the climb to the pass, so if we got stuck, I’m not sure what our options would have been. Calling AAA certainly wasn’t one of them.” 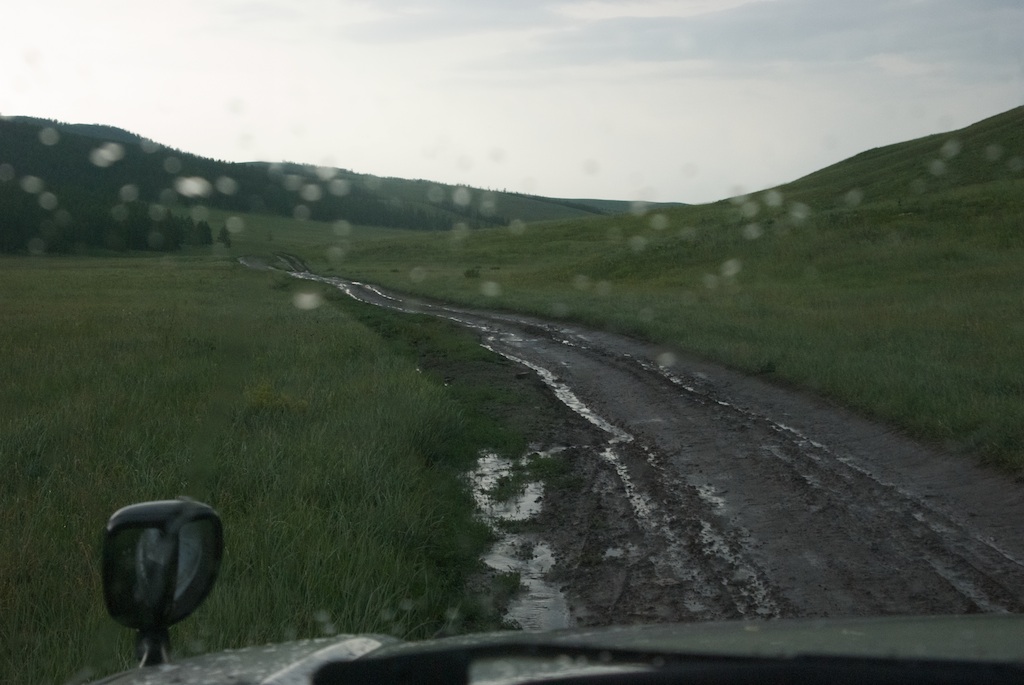 "Mud" road; deliberately driving into this ditch seemed really counterintuitive, but it worked

Finally we really were down out of the mountains, crossing a grassy steppe lit up in beautiful storm light. 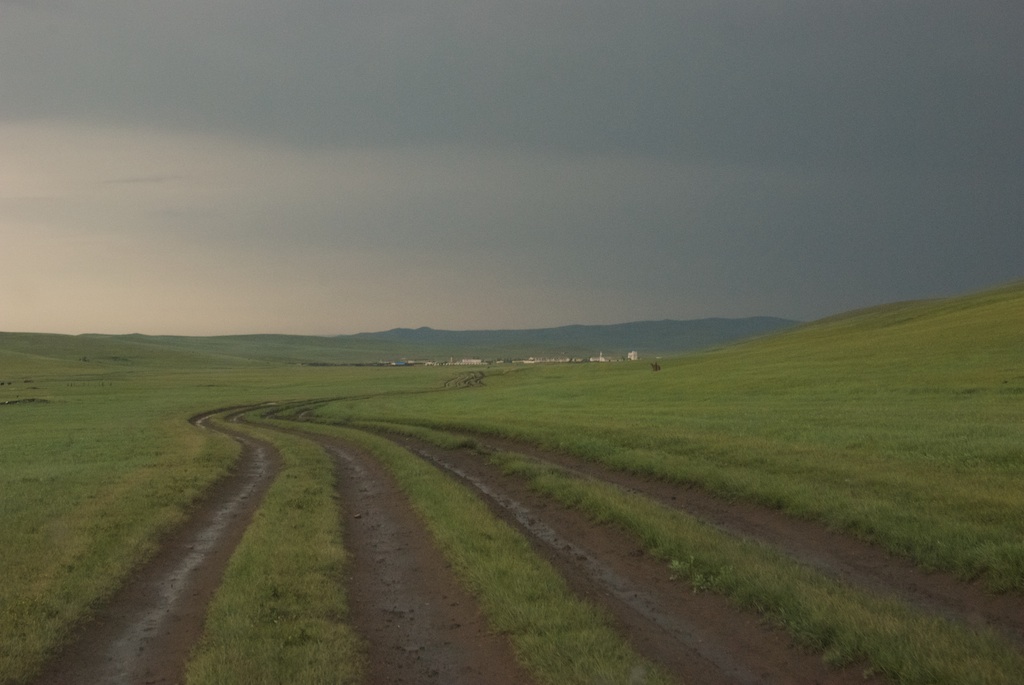 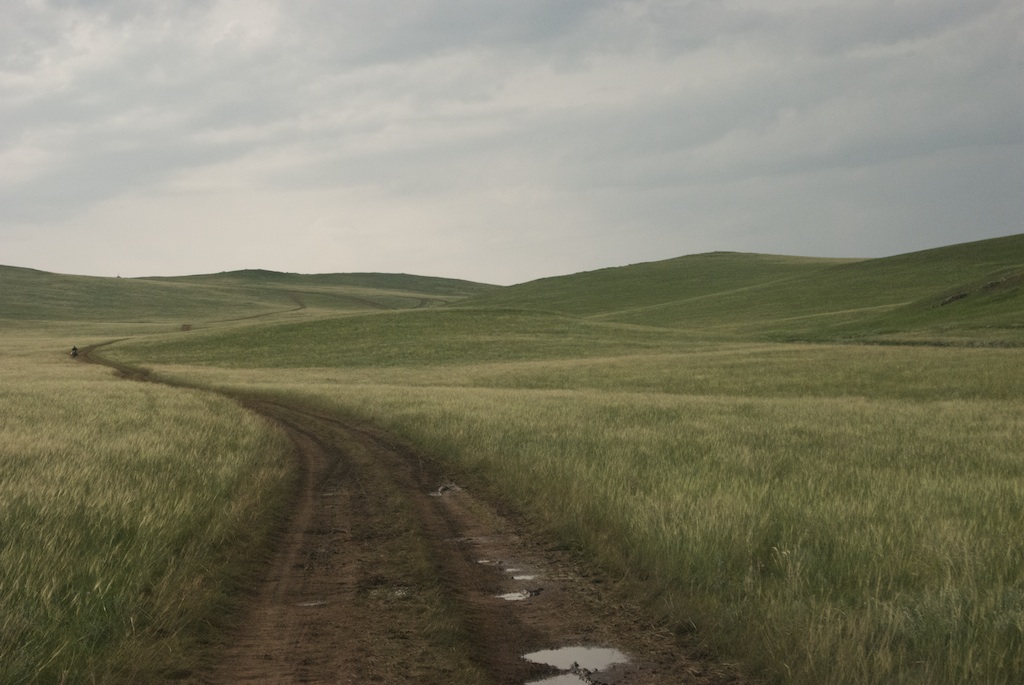 Soft light on the steppe 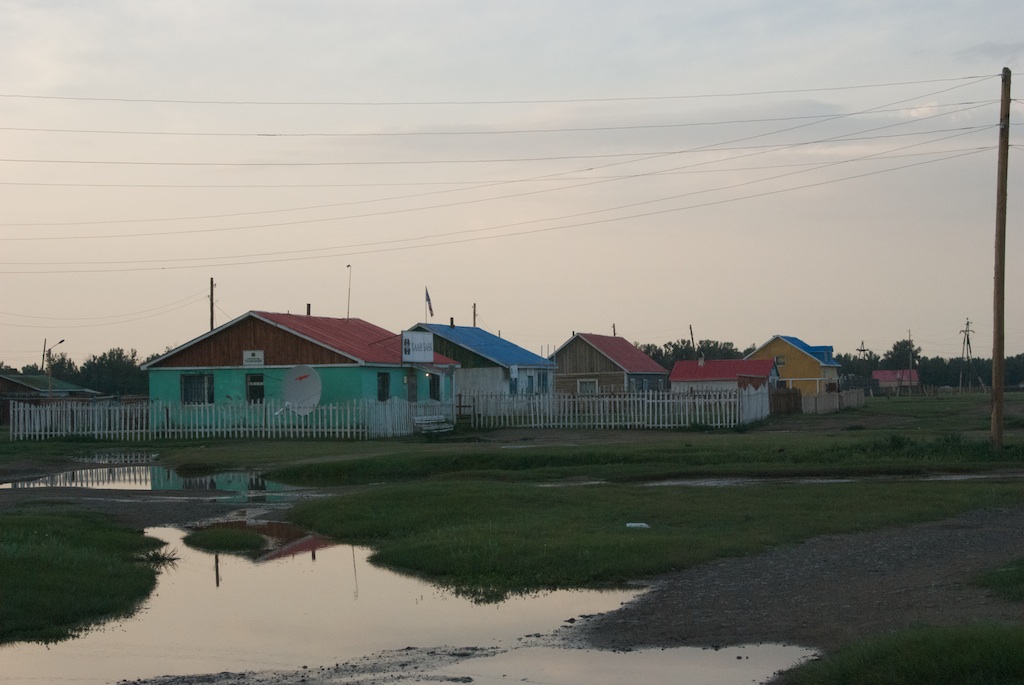 All this had really used up the day and, to my eternal delight, we ended up at Soyoloo’s sister’s home for dinner. And what a dinner! First, of course, was good, hot suutai tsai (milk tea), followed by airag, followed by nermal arkhi, accompanied by a big platter of aruul. Then we were served mantuu (steamed bread) roe deer venison, lenok (a kind of fish) broth and a big serving of buuz.

We also learned that, not surprisingly, the rivers were either high or flooded at most of the fording spots. Our hosts led us to a safe crossing point as an almost-full moon lit our way. We arrived at our campsite around 9:30pm and set up the tents. I don’t believe any of us had trouble falling asleep that night. 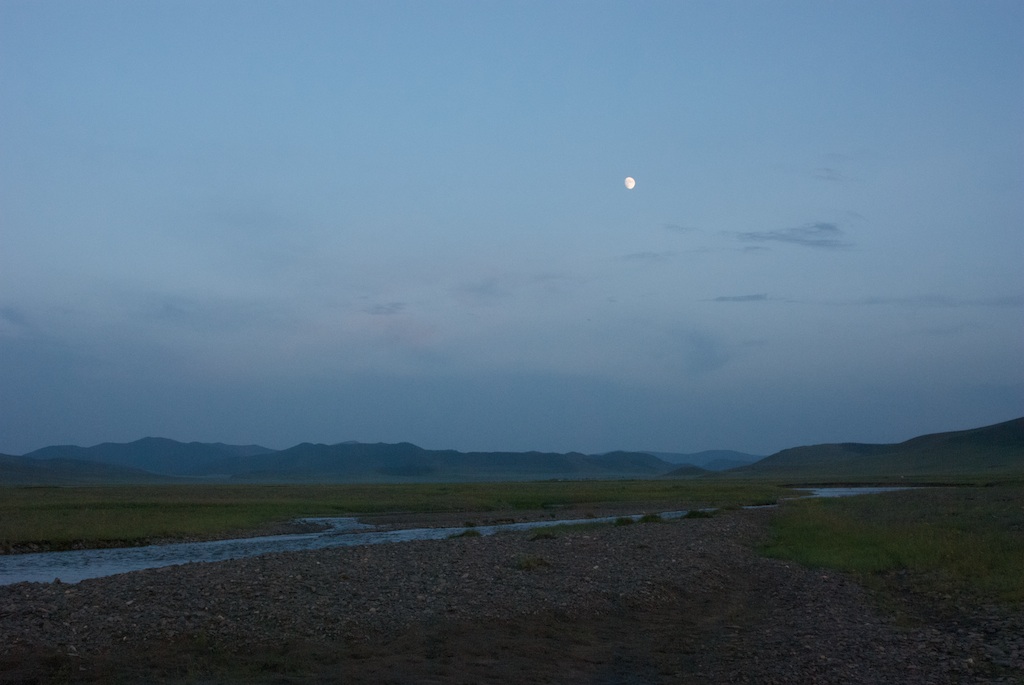 Next time: A trip into Tsetserleg, plus Uigher ruins and Mongolia’s most famous visitor destination- Erdene Zuu.