One of the advantages of my illustration training is the process that we were taught for putting a picture together. I don’t do all the steps all the time, but now that I’m about to start one of the largest paintings I’ve done so far, I need the control that the process gives me.

My first sighting of argali at Baga Gazriin Chuluu Nature Reserve, thanks to Onroo the local camp staffer who knows the place and where the animals tend to hang out, was a group of rams in wonderful morning light. Mostly they were grazing and resting. For this painting, however, I wanted action. The essential image popped into my head and then it was a matter of getting it down on paper, which is one reason why the thumbnail process is so valuable.

Here’s some of the reference that I’m using:

I liked the pose of the big ram who is third from the left. This photo was taken at Gun-Galuut Nature Reserve. I dumped the image into Photoshop and did a horizontal reverse to get him going the direction I wanted. And then zoomed in as much as possible. The next three are from Baga Gazriin Chuluu. Talk about reference eye candy.

I did a couple of drawings of the main sheep to try out position and gesture.

In this one I added the a background to see how that worked.

My idea is to channel a little Edgar Degas and have the animals coming in from the frame, not have all of them within the frame. This is too static, but it gives me something to bounce off of. Gotta start somewhere.

Here’s the thumbnail sheet. I’m trying to figure out where the three masses of sheep will be in relation to each other. Then I did another, larger sketch.

This is more what I had in mind. Almost everything is on a diagonal, which gets rid of the too-static quality of the previous sketch. As I draw and re-draw the animals, I’m able to get to “know” them better and can refine and push the poses.

I spent a good chunk of yesterday doing a finished scale drawing that will be transferred to the canvas via the ancient and honorable grid system. I ended up with three layers of tracing paper. The bottom one had the lines for the edge. The second one had the drawing of the sheep. The third was the landscape. I did one and it’s really nice, but not right for this painting. Replaced it with a new sheet and re-did it. When I was satisfied that I had more or less what I wanted, I re-drew the argali, once again refining and tweaking the drawing.

At this point, I have solved the design/composition problem and the drawing problem. Both may be re-visited at any time as needed if I see something that needs fixing, but the next step is a value study, that is, the pattern of lights and darks. We were told in art school that if we get the values in a picture correct, then we can do anything we want with color, which I have found to be true. One of the tasks that needs doing to take the Gun-Galuut argali and the image of the sunny rocks and make them work with the Baga Gazriin Chuluu morning light. For that I’ll do a color study.

I hunted through my reference once again for the sheep images that I thought would work best. And here is, so far, finished drawing. Still not sure about the argali on the left. I’ll see how it looks to me on Monday. I also think I need a little more “air” on the right side and maybe the top. Not much, maybe a half-inch. 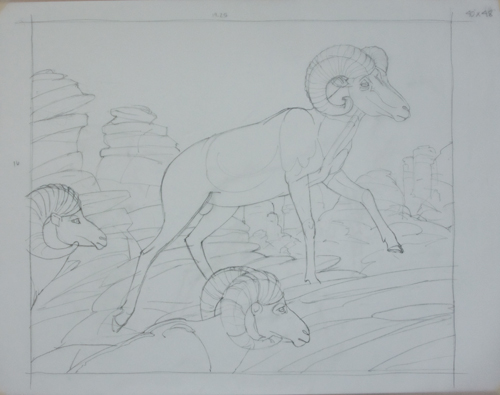 Finally, a favorite photo from the local Naadam at Erdene. Waiting for the race results.