Back home safe, sound and pretty functional. I use a jet lag program from a book I found years ago at our local travel store, “Overcoming Jet Lag”. I think it’s still available on Amazon. It consists of a variety of things to do to rapidly shift one’s body clock to destination time. For me, it makes all the difference in the world on a nine time zone shift like the trip I just took. Here’s a last look, for now, of Ulaanbaatar-

To wrap up the trip- got to the airport and gate area at the Chinggis Khan International Airport in UB around 10 am for a noon departure to Beijing, no problem. Boarded the Air China plane, no problem. Problem. Delay due to bad weather. Unclear what or where. Sat on ground. They served lunch. After two hours, we were deplaned and told that the flight would go at 4pm. At 4pm they announced a 6pm departure. Watched a sumo match on the tv (the world champ is a Mongolian, would you believe?). Read and got something to eat.

At 6pm, they started an announcement in Mongolian. All the Mongolians made happy noises and jumped to their feet. The rest of us joined them. Flight went, at last.

I had thought that I would have an afternoon and evening to poke around Beijing, so had booked into what the English call “character accommodation”- a converted old courtyard house, the Beijing Sihe Hotel, in a hutong neighborhood near the city center. Instead I arrived sweaty and exhausted around 9:30 pm. So I got to be there less than 12 hours, but what a wonderful place! I found them through http://www.tripadvisor.com, my go-to site for hotel/trip recommendations. They rate higher than a lot of the big, luxury hotels and the staff was great! Check this out- 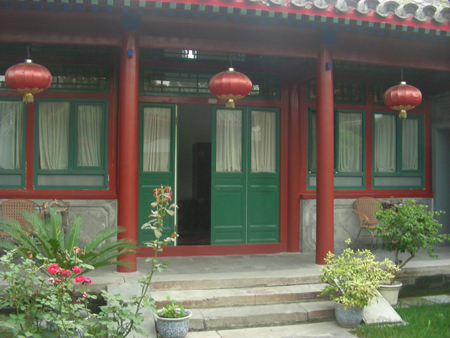 Door to my room at the Beijing Sihe Hotel 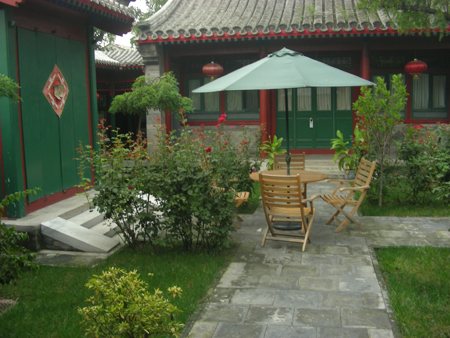 View from my room

My bed, no fooling

Back to the Beijing Capital Airport the next morning, through the worst smog I have ever seen. So much for those blue skies we all saw during the Olympics. On the other hand, the new airport terminals for international flights are utterly mindblowing, especially compared to what one had to deal with before. Whatever else, as far as I’m concerned, if the Olympics had done nothing other than prompt construction of the new terminals, that alone justifies awarding the games to China (but don’t get me started on Tibet).

On the way to the airport

Flight from Beijing to San Francisco and from there to home were delightfully uneventful. I’ve spent the last few days catching up, unpacking, cataloging the 2300+ images I shot, etc. Next week, it’s back to the easel!